The 31-year-old looks to repeat or improve upon his successful 2013 season.

Shortly after the 2012 season, the Mets signed right-handed pitcher Carlos Torres, a move that certainly didn’t generate a lot of attention. At the time, Torres had thrown just 95 innings in Major League Baseball with a 5.97 ERA with 77 strikeouts and 52 walks.

Although Torres didn’t make the team’s Opening Day roster last year, he wound up being a pretty good bullpen arm and spot starter. In 33 appearances, nine of which were starts, he had a 3.44 ERA, and his walk problems disappeared. At 1.77 walks per nine, Torres was tied for the 30th-best rate in baseball among pitchers who threw at least 50 innings in 2013. 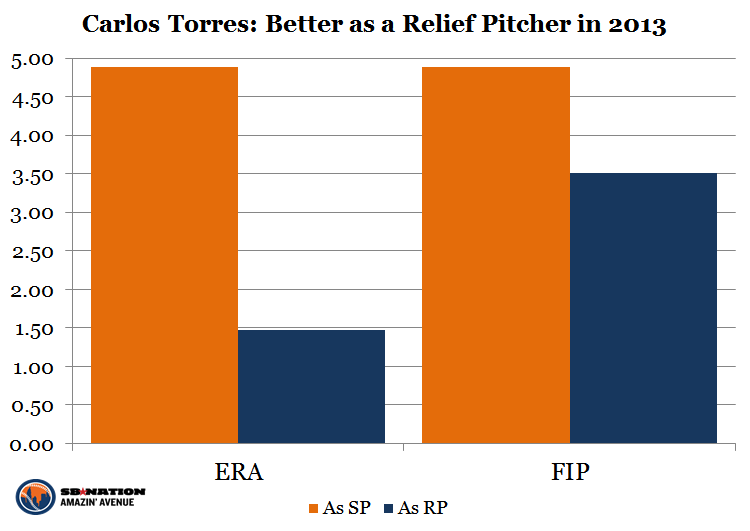 Torres’s starts really put a damper on his numbers for the season. As a relief pitcher, he had a 1.47 ERA and 3.51 FIP in 36.2 innings over 24 appearances. Given the starting pitchers presumably ahead of him on the Mets’ depth chart—Jon Niese, Bartolo Colon, Zack Wheeler, Dillon Gee, Jenrry Mejia, Rafael Montero, Jacob deGrom, Daisuke Matsuzaka, John Lannan, and Noah Syndergaard—it seems likely that he’ll mostly be a relief pitcher this year.

The projections are all a bit awkward on Torres, as every system has him making more than a few starts. The starting-relief splits are hardly a large enough sample to predict future results, but the fact that he fared so well out of the bullpen is encouraging heading into the season. Among the Mets’ potential relief pitchers, Torres is second to only Bobby Parnell in major league innings pitched. While talent ultimately trumps experience, Torres is at least a semi-known quantity.