John Lannan signed a minor-league contract with an invite to the big league camp. Could he contribute to the Mets in 2014?

For years, John Lannan was one of those pitchers the Mets seemed to covet. Pitching for the Nationals and briefly the Phillies, the lefty faced New York 13 times since his debut in 2007 and always seemed to do well against them. I say seemed because the numbers only bear that perception out slightly; when facing the Mets, Lannan tallied 3.70 ERA and a 1.27 WHIP, not dazzling numbers, but a tad better than his career averages, and better than many a pitcher the Mets sent to the mound over that stretch. Plus, Lannan also seemed a natural for the Mets just for geography's sake, since he grew up in the heart of Mets Country on Long Island.

After a promising start to his career, however, Lannan has fallen on hard times. He failed to make Washington's rotation out of spring training in 2012 and spent the bulk of the season in the minors before being non-tendered. His stint with Philadelphia last year was marred by ineffectiveness and a knee injury that limited him to 14 starts. 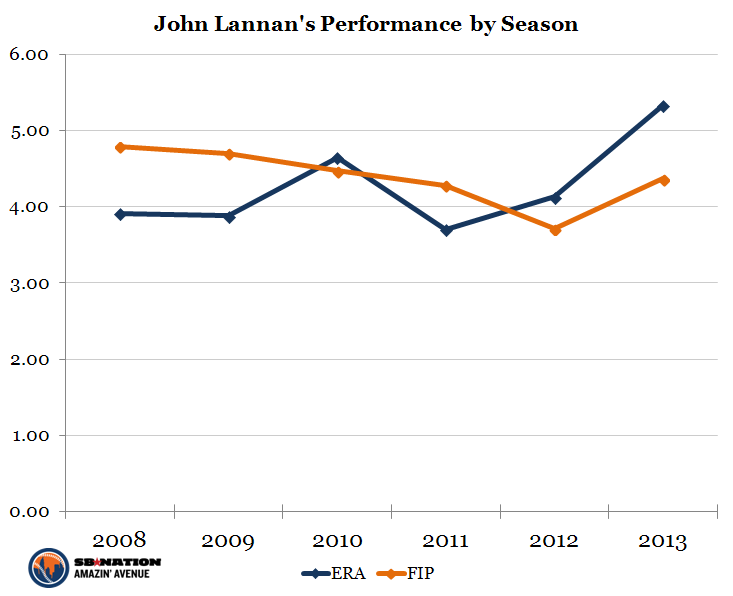 Back in January, the Mets gave Lannan a minor league contract with a spring training invitation and an implied chance to make the rotation. Lannan's best hope for making the big league club out of Florida is for one of the Mets' young guns to struggle in the Grapefruit League. But with the Mets basically punting on 2014 anyway, you'd have to hope management will favor starting pitchers like Rafael Montero or Jenrry Mejia over Lannan in order to give them more major league experience.

In the likely event that starting is not an option for Lannan, he might have a shot as the long man in a Mets bullpen that doesn't really have one at the moment. Even when Lannan was at his peak, however, he had low strikeout totals and average groundball rates, a skill set that doesn't lend itself well to relief work. All signs point to the southpaw being stored away in Las Vegas as insurance against future rotation injuries. And that assumes he pitches well enough this spring to be given even that modest consideration. Based on his last few seasons, that's a big If.