Can Curtis Granderson win his fight against the aging curve?

The prize jewel of the Mets' offseason, Curtis Granderson has been viewed by many as a good left-handed complement to David Wright. The level of Granderson's impact on the Mets depends on whether or not 2013—an injury-shortened season in which he hit just .229/.317/.407 (97 wRC+)—is the norm for him going forward. Granderson is a career .261/.340/.488 (118 wRC+) hitter, and in 2011 and 2012, he hit 84 homers combined for the Yankees. At age 33, though, he's entering the phase where hitters can decline rapidly. In fact, the most comparable batter for Granderson is, according to Baseball-Reference, Jason Bay.

As Eno Sarris pointed out back in December, the Bay comparison may not be entirely accurate. Granderson has been a better defender than Bay throughout his career, and while his defense has declined, the move to a corner outfield spot will help. Granderson will also be a better baserunner, as he's been a net asset on the bases every year of his career. Of course, Granderson may not be the next Bay is simply the fact that what happened to Bay is unprecedented. From 2004 to 2009, Bay hit .280/.375/.519 (130 wRC+) with a .240 ISO in 3,790 plate appearances. In his three seasons with the Mets, Bay hit .234/.318/.369 (91 wRC+) with a .135 ISO in 1,125 plate appearances. Bay didn't "decline" so much as he collapsed. Expecting any hitter to fall apart like that is probably unreasonable, including Granderson. 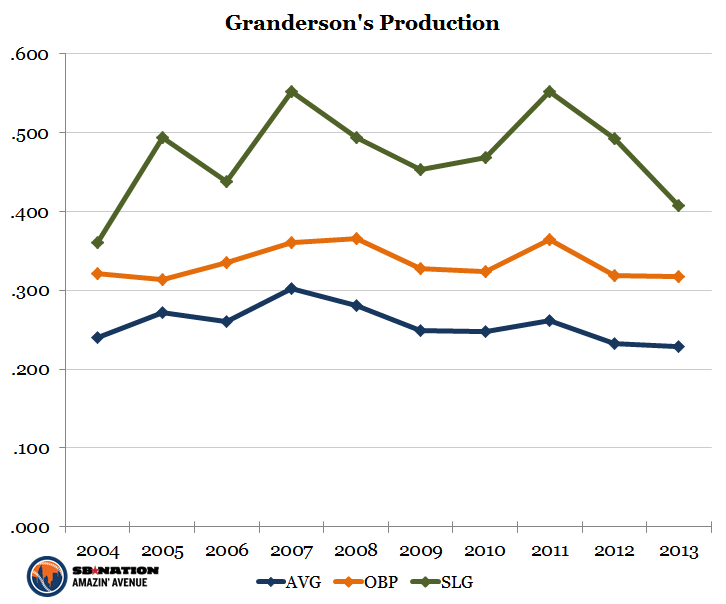 Still, it's not hard to be pessimistic about Granderson. His strikeout rate has risen from 19.9 percent in 2009 to 28.4 percent over the last two seasons. Granderson's contact rate was a career-worst in 2013, at 69.5 percent, and his .178 ISO was his lowest since 2006. These would all signal that Granderson is well into his decline phase. Those numbers don't tell the whole story, though.

While his contact rate dipped, Granderson's batted ball profile was not too dissimilar from previous seasons. Granderson suffered a broken arm due to a hit-by-pitch in spring training and didn't even make his season debut until May 14. He played in just eight games before being hit by a pitch on his hand, breaking a bone. He wouldn't return until August 2. August would prove to be a good month for Granderson, as he hit .278/.398/.444 with a strong 27/18 strikeout to walk ratio.

For whatever reason, Granderson collapsed in September, hitting .177/.233/.375 with a 36/7 strikeout to walk ratio. It's hard to point out everything that went wrong for Granderson in September, but the biggest issue would appear to be a decline in his ability to make contact. According to TexasLeaguers.com, Granderson's whiff rate and foul ball rate against four-seamers, two-seamers, changeups, sliders, and curveballs all rose significantly from August to September. While this could be a sign of something moving forward, a more plausible explanation would be residual effects from the two injuries, especially given his August.

Projecting what Granderson will do in 2014 is difficult given his limited 2013. Neither Steamer nor Oliver have favorable projections for Granderson; the former projects Granderson to hit .228/.320/.429 with 24 homers, while the latter predicts .220/.306/.390 with 19 homers. Even if Granderson has recovered from his injuries, he's still unlikely to rebound to his peak numbers as a Yankee.

Going forward, Granderson's biggest key will be whether or not he's willing to adjust his swing. While a flyball heavy approach worked in the Bronx, it has come at the expense of his ability to make consistent contact. A less aggressive approach by Granderson will mean less poor pitches chased out of the zone, while likely increasing the number of favorable pitches he sees inside the strike zone, which has dwindled the last few seasons. It may not be enough to compensate for a drop in bat speed, but it can't hurt.

Granderson's 2014 will almost certainly fall short of Marlon Byrd's 2013, but will be more than respectable, a very good season, but not a superstar season.