The Mets best defensive player might not even have a starting job in 2014.

Before 2013, few would have envisioned Juan Lagares as a major league center fielder. His name didn’t headline any top prospect lists, his minor league numbers were underwhelming, and his best skill ranked second, at best, behind another defensively talented fringe outfield prospect in Matt den Dekker.

Needless to say, Lagares has come a long way from being a borderline prospect. Injuries and uninteresting options ahead of him paved the way for Lagares to post a successful 2.9 fWAR campaign despite a .281 on-base percentage, the fifth highest fWAR of any rookie.

A fair number of critics will cry fluke—perhaps rightfully so— whenever a player produces that much value almost exclusively from a 121-game sample of excellent defensive metrics. Defense is incredibly tough to quantify, and even the best metrics available tend to require much larger sample sizes than offensive or pitching statistics.

But completely throwing away Lagares’s season would be a huge error in judgment, especially when his range and arm both passed the eye test and were met with rave reviews from scouts. Lagares appears to play an excellent center field, even if his true-talent UZR might look more like +15 than +24. Meanwhile, regression to the mean can occur on both sides of the ball. Juan won’t need to hit much at all to improve on his 75 wRC+ and .242/.281/.352 hitting line from last year. 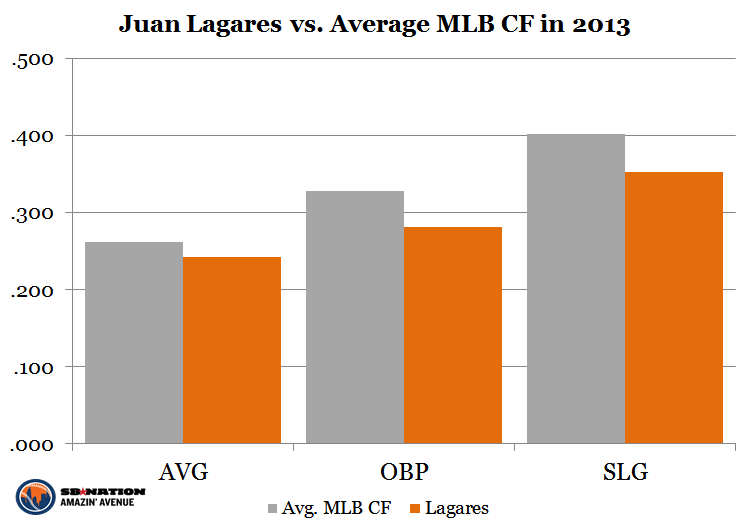 The projections might not give Lagares enough credit on defense, but he won’t even have the opportunity to show 2013 wasn’t a fluke if he’s not in the lineup every day. Despite being a marginally better offensive player, Eric Young Jr. might be given a spring training opportunity to take some at-bats away from Lagares and maybe even send him to Triple-A. This could simply be spring training rhetoric, but whether or not Lagares is worthy of the starting center field job could be an interesting debate until Opening Day.