While he may not even be the best catcher in his own system, the Purdue product has climbed to the upper tiers of backstop rankings around baseball.

Drafted by the Mets in the first round (supplemental) of the 2012 MLB Amateur Draft (Purdue University).

The 2012 first-rounder continued his growth on both sides of the ball in 2013, ultimately ending the season as a top-tier prospect in the system. After a very strong run with Savannah, the 22-year-old batted .294/.391/.392 in his first shot at Advanced-A, featuring his customarily excellent strikeout-to-walk rate (21:19). Additionally, he received praise for his improved work behind the plate, including better footwork as well as game-calling skills while maintaining strong a 30% caught stealing rate. 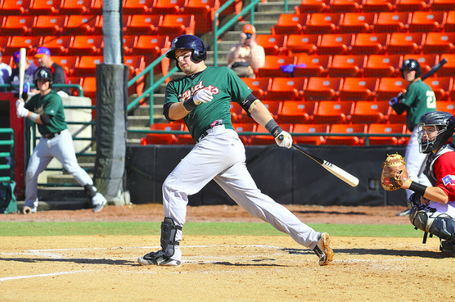 Though he'll likely never win any Gold Gloves, Plawecki is effectively shaking off questions about his long-term defensive home. And though his power projection may never resemble the current 'catcher of the future', Travis d'Arnaud, his high contact, high on-base profile bodes well for a meaningful career at the highest levels. It remains to be seen whether he'll top out as just a major league backup or continue to develop the kind of offensive skillset to justify regular at bats; likely his burgeoning hit tool will tell that story and if 2013 is our model it's easy to see a solid all-around, league-average catcher here -- a very valuable thing. In any case it's refreshing to declare that the club has a couple of major league-caliber catching prospects for a change.