Wilmer Flores showed flashes when he was called up to the bigs in 2013. Where can he play in 2014?

Wilmer Flores signed with the Mets in 2007 at the tender age of 16. He quickly took over Fernando Martinez's vacated role of Teenage Hitting Machine. After tearing up at triple-A Las Vegas in 2013, he was promoted to the big league club in August, largely filling in for David Wright at third base while The Captain dealt with a hamstring injury. Flores held his own at the plate for a while before an injury of his own (ankle) slowed him down, and he received relatively little playing time down the stretch.

Flores remains the Mets' top hitting prospect and by far the one closest to contributing at the major league level. Barring injury, though, it's hard to see him making the club out of spring training. He is still a man without a real position; the Mets switched him from shortstop to third base in 2011 and he has yet to find any kind of defensive groove. The less said about his travails at second base last year, the better. The Mets say they won't rule him out for shortstop, but this seems unwise, even if the team walks away from a deal with Stephen Drew. He wouldn't do much damage at first base, but with Ike Davis being given another shot, that's not an option. There's always the outfield, but for some reason the Mets seem bound and determined to stick Lucas Duda in left and cross their fingers. 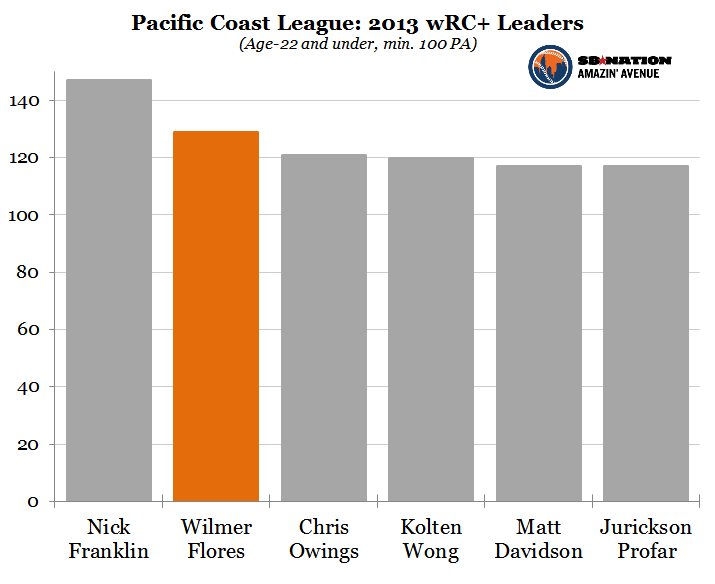 Since Flores was signed at age 16 and has seemingly been in the organization for so long, it's hard to remember just how young he is. He will only turn 23 this year. In 2013, between Las Vegas and the majors, Flores faced zero pitchers younger than himself. That's zero as in nada, zilch, and bupkis. He needs to play every day and develop some competence at a position other than third. He won't get that shot in Flushing, so it would be best for him to start the year at triple-A and bide his time until an inevitable injury gives him a chance to Wally Pipp someone else in the Mets' infield.