The young right-hander looks to take a step forward in 2014.

Few things went right for the Mets in 2013, but one of the bright spots came from the midseason debut of Zack Wheeler. The 23-year-old righty was solid in 17 starts for the Mets, posting a 3.42 ERA, 4.17 FIP, and 4.21 xFIP and 84 strikeouts in 100 innings. With Matt Harvey's absence in 2014, high expectations have been placed on Wheeler. The problem is, they may not be realistic.

Despite being drafted sixth overall in 2009 and his status as one of the best pitching prospects in baseball, there have always been knocks on Wheeler. One of the biggest is his control, or lack thereof. Over 391.1 minor league innings, Wheeler walked 11.7 percent of the batters he faced. The problem didn't go away when made it to the Mets, as he walked 10.7 percent of the batters he faced, which was seventh worst among MLB starters who pitched at least 100 innings in 2013. Wheeler was not able to counteract this with an elite strikeout rate, as his 19.5 percent rate only ranked 59th amongst starters, sandwiched between Ivan Nova and Dan Straily, both of whom displayed substantially better control. When you consider that Wheeler threw fewer than half (49.2%) of his pitches inside the strike zone, the number of walks are not a surprise.

The good and bad news for Wheeler is that his control issues came primarily against left-handed batters. Wheeler dominated righties in 2013, as they had a .639 OPS against him. Wheeler posted a 3-to-1 strikeout ratio (46 strikeouts to 15 walks in 56.2 innings) against them, while posting a 48.2% groundball rate, a miniscule 28.9% flyball rate, and while generating popups 20.9% of the time. Left-handers gave him fits though, as he posted an appalling 38/31 strikeout to walk ratio (.766 OPS) against them in 43.1 innings. This was punctuated by the fact that Wheeler's groundball rate against lefties was only 36.7% and they only popped up against him 10% of the time. 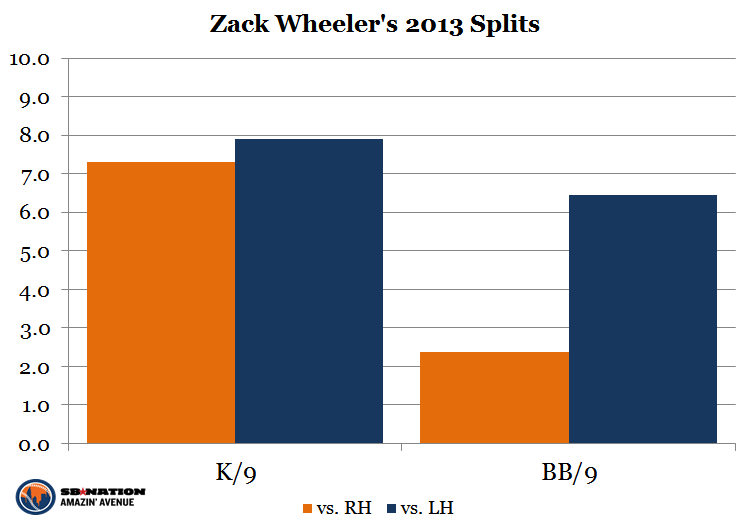 What's interesting to note is that Wheeler's pitch usage against lefties and righties was quite different and may be the reason for the platoon splits. Overall, Wheeler threw fastballs 71.2 percent of the time—51.8 percent four seamers and 19.4 percent two-seamers. Wheeler's other two primary pitches were his slider (15.8%) and curveball (10.2%). Against right-handers, Wheeler threw four-seamers 50.2% of the time and had a whiff rate of 8.7%. Interestingly, he threw sliders 23.5% of the time against righties, and he generated a phenomenal 12.9 percent whiff rate with the pitch. Wheeler's other pitches against righties, the two-seamer (9.5% whiff rate) and curveball (8.5% whiff rate), were also successful.

It's unclear why Wheeler used his offspeed pitches so sparingly against lefties, but it's an approach that did not work. It's perplexing, especially when looking at how effective the slider was against lefties in its limited use:

Heading into 2014, Wheeler clearly has a lot to work on, and it seems unlikely he'll have substantially fixed his issues in one offseason. The projection systems agree, as neither Steamer (10.6%) nor Oliver (10.4%) project improvement in his control in 2014, although Steamer projects a rise in his strikeout percentage (20.8%). Jeff Zimmerman of Fangraphs is also pessimistic, as he points out 12 pitchers who had similar rookie seasons to Wheeler. While some pitchers like David Price and Randall Delgado took big steps forward with their control in their second seasons, other pitchers like Ubaldo Jimenez, Jason Hammel, and Justin Masterson did not take a big step forward with their control until their third full season or later.

Even with all of his issues, there is a lot to like about Wheeler. Turning just 24 at the end of May, he possesses a tremendous amount of upside, more than any of the other current Mets starters. Unlike many of the other starters on that list, Wheeler throws upwards of 94 miles per hour and has quality offspeed pitches. There is also the fact that in July and August, Wheeler displayed greatly improved control, striking out 59 batters (20.9%) and walking just 23 (8.5%) in 67 innings.

2014 will probably not see Wheeler rise to the level of an ace, but he will still be one of the bright spots on the team in all likelihood. If he can improve his performance against lefties and maintain the control he showed in July and August, he has the potential to be one of the better starters in the National League. Even if that doesn't happen, he will still be enjoyable to watch every fifth day.