It's okay, fellow Mets fans. Matt Harvey probably won't pitch in 2014. You can let it all out right here. I'll even help you to get in touch with your emotions:

After going under the knife in October, Matt Harvey's 2014 season is likely over before it is set to start and that's just a damn shame. In 2013, the righthander electrified not only the Mets fanbase but the entire league. He nearly threw a no-hitter with a bloody nose, he started for the National League in the All-Star game at Citi Field, and was a clear Cy Young candidate before a partial tear in his ulnar collateral ligament halted his season in late August. The diagnosis of the tear, which ultimately led to Tommy John surgery, took away from what was a breakout season from the Mets' 24-year old star pitcher.

While Harvey likely won't get to toe the Citi Field mound this season, we can reflect on what he did in 2013. In short, he was spectacular and historically so, throwing 178.1 innings with a sparkling 2.00 FIP. That FIP was the lowest in baseball in 2013 among pitchers with at least 170 innings and in fact, it was the fourth lowest single season mark in baseball among qualified starting pitchers since 1970, only behind Pedro Martinez's unbelievable 1999 season (1.39 FIP), Doc Gooden's 1984 season (1.84 FIP), and Tom Seaver's 1971 season (1.93 FIP). The Mets have a rich history of pitching and Harvey's season stacks up well against some of the best pitchers to put on the franchise's uniform. 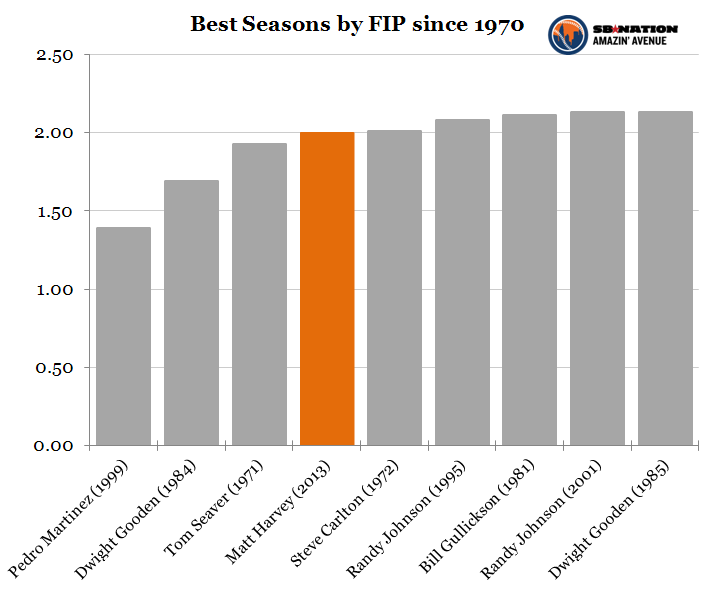 What does 2014 look like for Matt Harvey? Even though he's stated that he wants to travel with the team throughout the season, Harvey's year seems likely to feature a lot of time at the Mets' complex in Port St. Lucie. There he'll spend time rehabbing his arm and working with Mets coaches in hopes of getting his career back on track, ideally beginning on Opening Day 2015. Luckily, Tommy John surgery has become routine these days and though there are always the cautionary tales of players who don't recover from it, Matt Harvey seems like the type who will come back quickly and come back stronger than before.