The 22-year-old infielder put up eye-popping numbers in his first run at Triple-A pitching. However, the outcome to his noted defensive deficiency is no more clear heading into 2014.

Signed with the Mets as an international free agent on August 6th, 2007 (Valencia, Venezuela).

The 22-year-old Venezuelan was nothing short of exceptional with Las Vegas in 2013, posting a .321/.357/.531 line along with 15 home runs and an outstanding 36 doubles in 107 games. After just half a season in Double-A in 2012, Flores confirmed that he has one of the most advanced bats not just in the system but in all of the minors with his performance in his Triple-A debut, as one of the youngest players in the Pacific Coast League no less. Not only did he continue to make very good strides in the way of in-game power -- his .210 ISO was a career-high -- but it did not come at the expense of his characteristically stellar strikeout rate (13.6%). Though he mostly struggled through his first 100 plate appearances in the big leagues thanks to injuries, it became clear that Wilmer Flores can be an impact player at the highest levels.

In short, Flores has the best bat the Mets have developed since David Wright. His nearly preternatural ability to put barrel to ball and increasing likelihood to do so with authority is almost unmatched amongst his peer group. Unfortunately while other players offer additional value in the field or on the basepaths, Flores does not. His clunky infield play has the potential to be average at best and the lack of foot speed and overall athleticism means he won't ever steal bases. The fact that he badly twisted both ankles within weeks of his major league debut wasn't entirely coincidental. 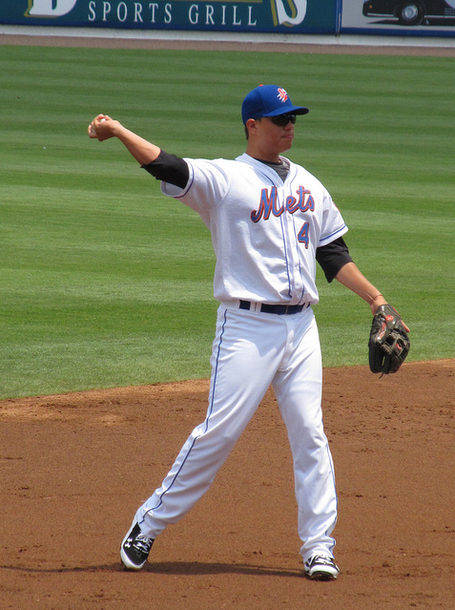 That said, if the 6'3" righty can be passable at second -- still a big if -- the value of his bat coupled with the positional value would make him a very interesting player. The Mets will most likely start Flores back at Las Vegas almost entirely to allow him to work on his glove. If he can give the organization confidence in his ability to consistently make all of the plays he's 'supposed to make', look for him to get the call at the first extended shot -- whether it derives from injury or trade. I remain positive on his chances to make it all work; while the value of offseason speed drills may be overstated, so too is the level of difficulty to play a serviceable second base. If it doesn't work, however, look for Flores to figure in alongside Ike and Duda as an option at first base.