The veteran Japanese hurler will be one of many pitchers competing for a spot in the starting rotation.

It remains a possibility that the 33 year-old Daisuke Matsuzaka is fully healthy for the first time in a long time, and is capable of pitching like the ace he was billed as when signed by Boston in 2007. Sandy Alderson, acknowledging this possibility, re-signed the veteran pitcher to a minor league contract with an invitation to spring training, where he has a chance to make the Mets as the team's fifth starter.

Dice-K did not live up to expectations in Boston, but he was not a complete bust, either. In his six years with the Red Sox, the former ace of the Seibu Lions tossed 668.1 innings, compiling a 50-37 record with a cumulative 4.52 ERA and 101 ERA+, good for a total of 10.4 fWAR and 9.2 bWAR. When healthy and able to pitch the bulk of a season, Matsuzaka was an effective, above average option on the mound.

He was healthy enough to pitch that much in his 2007 rookie season and sophomore 2008 season, starting 32 and 29 games respectively. For various reasons, he was unable to stay healthy, leading to ineffectiveness and time on the disabled list. In 2009, he missed considerable time with weakness in his throwing arm and a hip injury. In 2010, he missed time at the beginning of the season because of a neck injury. In 2011, he was shut down in early June to undergo Tommy John surgery.

In addition to injury, Matsuzaka has been plagued with control problems which seem to stem from the differences between the baseballs used in MLB and NPB games, as well as the differences in strike zone size between the leagues (and how the stroke zones are interpreted by umpires and batters.) When he pitched for the Lions, Matsuzaka had no such control problems. He recorded a career walk rate of 3.2 walks per nine and averaged 2.2 in his final five seasons with the team. By contrast, he has averaged 4.3 walks per nine in the United States. 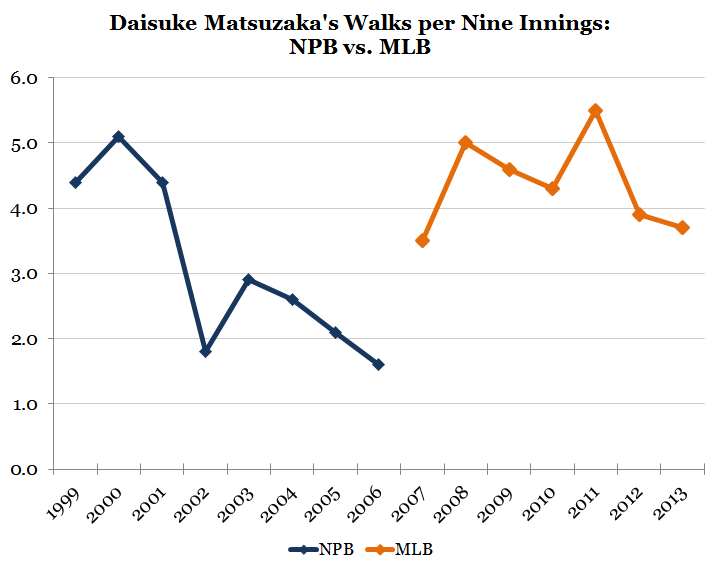 The veteran was signed to a minor league contract by the Cleveland Indians in early 2013, and the signing paid dividends for the Columbus Clippers, the team's Triple-A affiliate. He was among the team's best starters, outperformed only by Carlos Carrasco and Danny Salazar. He posted a respectable 3.92 ERA, striking out 95 batters and walking 39 in 103.1 innings. Most importantly, he was healthy, perhaps more so than he had been in years.

In late August, the Indians released Matsuzaka at his request, giving the Mets an opportunity to pick him up. His first three starts were miserable affairs. The Japanese hurler was rocked by the Detroit Tigers, Philadelphia Phillies, and Atlanta Braves. In those three games, he pitched a total of 12.2 innings and posted a 10.66 ERA. Batters hit an MVP-like .365/.459/.615 against him.

Despite those three terrible starts, there were signs that Matsuzaka was not pitching as poorly as his surface stats reflected. He struck out 12 batters, and his .432 batting average on balls in play and 28 percent line drive rate against were too high to sustain. Sure enough, in his final four starts, he broke out of that funk and pitched as well as he ever had against MLB hitters, throwing 26.2 innings with an average of nearly 7 innings per start. He posted a 1.35 ERA, striking out 21 batters and walking just 9, while holding batters to a less-impressive .146/.248/.213 slash line.

Matsuzaka is competing for a spot in the rotation against the likes of Jenrry Mejia, John Lannan, and others, which gives him a fair chance of making the Mets' roster out of spring training. If he does not, he will join a Las Vegas 51s starting rotation that is shaping up to look very solid all around. Because the veteran hurler has over six years of MLB experience, he can opt out of his contract on June 1 if he is not on the Mets' major league roster.