The expectations for Valverde should be very, very low.

When the Mets signed Jose Valverde to a minor league contract, the general consensus was that it was a decent low-risk move, high-reward move. Unfortunately, it's likely neither low. As pointed out by Twitter user @thebs19, financial cost is not the only consideration here. There is opportunity cost, in the sense that Valverde will be taking away the chance to evaluate and use another reliever. There is also a potential performance cost. This last point is important because, at this point in his career, Valverde is a terrible reliever.

Once a top shelf reliever with the Diamondbacks and Astros, from 2003 through 2009, Valverde posted a 3.17 ERA and 3.47 FIP in 386 innings with 470 strikeouts (29.1%) and 155 walks (9.6%). Since he joined the Tigers in 2010, Valverde has been on a gradual decline, and 2012, his last full season, was his worst as a pro. In 69 innings that year, Valverde posted by far the worst strikeout percentage of his career at 16.3, which also coincided with the worst swinging strike rate (7.1%) of his career. The strikeout percentage was the 15th lowest in the majors, and only seven relievers posted a worse swinging strike rate. Valverde was unable to cushion this with a decent walk percentage (9.2%) or groundball rate (34%). He posted a not-horrible 3.78 ERA, but was that almost entirely due to a fluky, low home run rate of 0.39 per nine innings.

Last year, Valverde only pitched 19.1 innings and posted an ugly 5.59 ERA. His strikeout percentage (22.6%) and walk percentage (7.1%) look solid, but they are misleading for a few reasons. First, nothing meaningful can be taken from 19.1 innings. Second, his swinging strike rate was once again poor (8.2%). He also allowed a contact rate of 90.8 percent, a big problem considering that his 40.4 percent groundball rate was once again pedestrian. On top of all that, he allowed six homers, four to left-handed batters and two to righties. 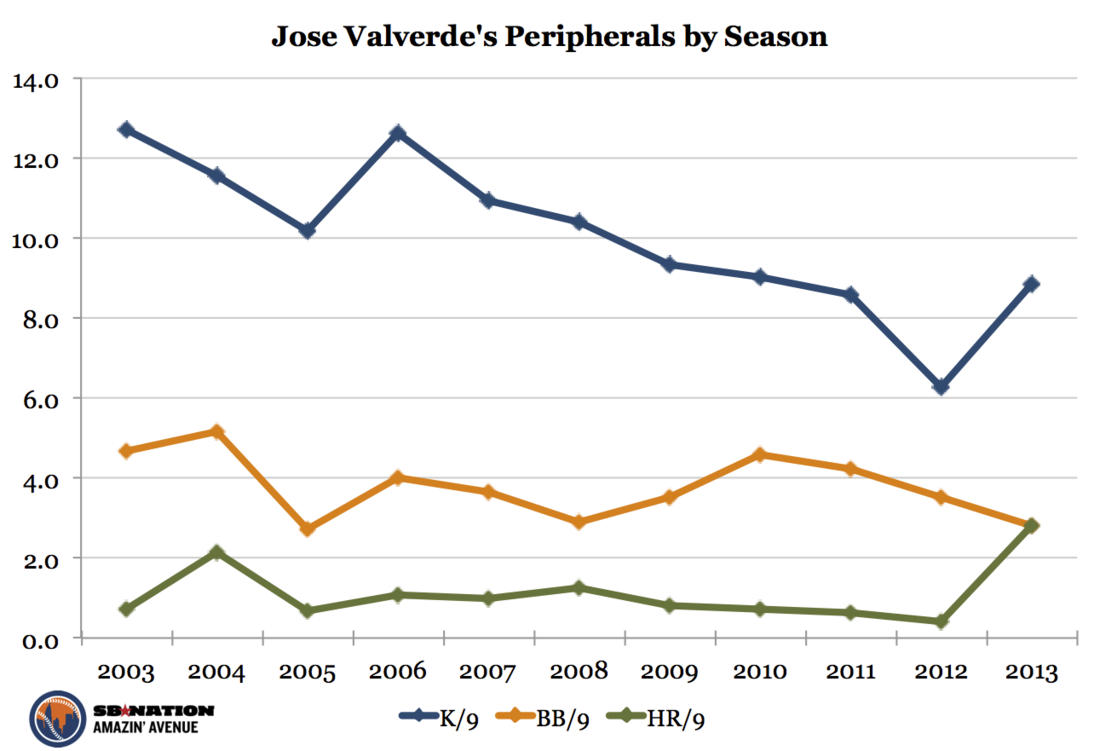 Reliever fluctuations are a constant in MLB. Some Mets fans will point to LaTroy Hawkins as a reason to believe Valverde can rebound. The problem with this is that they don't compare well at all. A general saying about MLB pitchers is that they control three things: their ability to strike batters out, limit walks, and induce weak contact. Since becoming a reliever in 2000, Hawkins has walked 6.9 percent of the batters he's faced and posted a 47.8 percent groundball rate, making up for a below-average strikeout rate. Despite an overall poor year in 2012, Hawkins still displayed great command (7.3% walk rate) and a high groundball rate (56.5%), making a bounceback season more likely.

Valverde has been the exact opposite. His control has always been terrible (10% walk rate), and outside of 2010, he's never been able to get ground balls, with a career rate of 39.4 percent. Valverde has always relied on a high strikeout rate, and that's disappeared. Turning 36 in March and with a fastball that has dipped below 93 miles per hour on average, it's highly unlikely it comes back.

It's also important to note that Valverde has become incapable of getting left-handed batters out. In the last two seasons, Valverde has allowed a .335 wOBA to lefties, with 31 strikeouts and 23 walks in 47 innings. He's allowed a .249 wOBA to righties in that time, with 36 strikeouts to 13 walks in 41.1 innings. That's not a point in Valverde's favor, though, because relievers who can only get right-handed batters out, or ROOGIEs, are not worth having on the roster.

This may be a middling year for the Mets, but that does not mean they should just hand away roster spots to aging, veteran relievers well past their prime. Barring some radical change in stuff or mechanics, Valverde's performance is likely to be sub-par once again. The Mets have internal options that could post results similar to Valverde's last two seasons, and unlike Valverde, they possess at least marginal upside. If he does make the Opening Day roster, he is a good bet to be a major detriment to the pitching staff.