The toolsy outfielder had a breakout campaign in 2013. However, it was what took place outside the lines that has some curbing their enthusiasm for his future chances.

Signed with the Mets as in international free agent on July 2nd, 2007 (La Romana, Dominican Republic).

The polarizing outfielder was nothing short of dominant in 2013, taking the Eastern League by storm in his first exposure to Double-A baseball. The 22-year-old posted an outstanding .326/.403/.547 line along with 16 home runs and 24 stolen bases in 91 games. If that wasn't enough, he also posted the best walk rate of his career (7.4%) while bringing his strikeout rate down to more manageable levels (21.8%). Needless to say a .391 BABIP isn't sustainable so don't expect a .330 average going forward -- but it does indicate a guy that was stinging everything he saw. In short, Puello was one of the best performers in minor league baseball regardless of what unnamed sources may or may not have to say. For reference, Pittsburgh's equally toolsy 22-year-old uber-outfield prospect Gregory Polanco batted .263/.354/.407 in his first go-around in the Eastern League in 2013. Puello was a stud for Binghamton -- and still somehow managed to make himself even more polarizing.

That's because he was suspended in August due to his complicity in the Biogenesis scandal. So the question now is how do we reconcile that information alongside what he did on the field in order to formulate a reasonable analysis of the player? Do we write off the performance? Do we turn a blind eye to the PEDs? It's a tough call -- and mitigating factors make judgment even tougher: For one, Puello has never had a season like this one, struggling to actualize his top shelf tools every season prior. Further, his hapless, 41-game performance in winter ball (.200/.252/.261, 5 walks vs. 30 strikeouts) introduces yet another conflicting data point -- despite that team's position that he was just rusty. 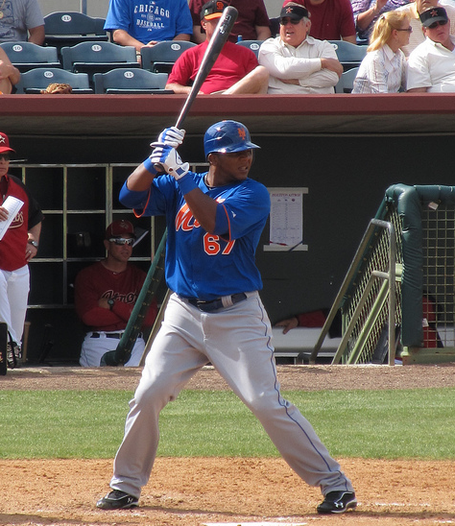 That said, there is no right or wrong answer with Puello. If someone legitimately feels he's a non-prospect -- presumably based on the fact that PEDs drove his only standout season -- that's defensible. Conversely, one can point to the longstanding major league toolbox and the subtle growth in years past to label his 2013 the genuine article. I tend to fall closer to the latter, as we've heard time and time again that PEDs are no substitute for the kind of tools that Puello possesses. I still do harbor serious concerns about his ability to play everyday at the major league level; but those relate more to his suspect plate discipline and the potential that it could very easily short circuit his burgeoning power bat against more advanced pitching. It's clear that Puello will help a major league team; but to what extent is entirely in the eye of the beholder at this point.

"Long before there was Biogenesis, Baseball America rated him the 12th-best prospect in the Gulf Coast League (2008), the 9th-best prospect in the Appalachian League (2009), and the 13th-best prospect in the South Atlantic League (2010). His 2011 and 2012 seasons were let-downs for different reasons, but they weren’t objectively horrible either. That some of that potential finally came together all at once and manifested itself in an exceptional season last year is nothing particularly eyebrow raising or untoward for a player like Puello -- even with the specter of some kind of PED involvement looming."