The slender, 23-year-old righty hopes to ride a stellar fastball and highly-advanced pitchability to a long-term spot in the Mets rotation.

Signed by the Mets as an international free agent on January 20th, 2011 (Banica, Dominican Republic).

It's rather amazing that the 6', 170 lbs righty who signed his first professional contract at age 20 almost exactly three years ago is making such immense waves in discussions about the immediate and long-term future of the Mets rotation. In fact, after a season where he dominated in his first look at Double-A hitters then posted a very strong 3.05 ERA (2.87 FIP) in his first 16 starts at Triple-A, the 23-year-old looks like he could represent a mainstay on the Mets pitching staff for years to come.

The name of the game for Montero is fastball command. That is not to say that velocity isn't a factor; despite his slender build, the Dominican righty generates tremendous arm speed and regularly works his heater in the 91-94 MPH range, reaching back for more when necessary. That combination immediately makes him a factor at the major league level and would sustain a role in late relief today. That said, his slider/change mix is promising. Neither is a true swing-and-miss offering; however, he can consistently throw both pitches for strikes and has enough feel for both to keep hitters off balance. His overall feel for pitching in general allows him to keep hitters guessing and often 'pitch backwards'. While the stuff points to the lower part of the rotation, such advanced pitchability is an interesting factor that gives Montero a chance to elevate his game if he can continue to adjust at the highest level. 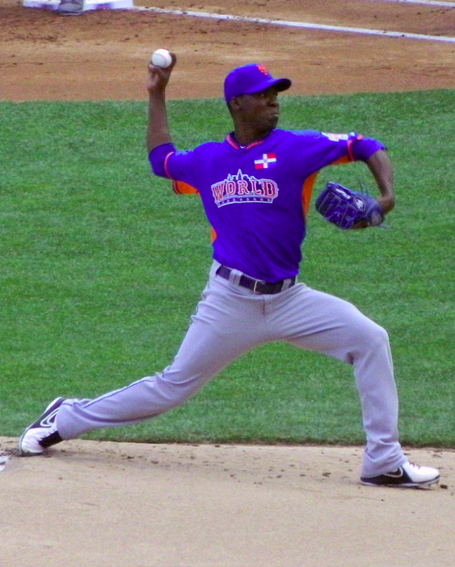 As an aside, the most interesting thing to me about Montero is his road to get here and the fact that as a teenager the scrawny righty was repeatedly passed over by major league organizations. In fact, Montero is just about the best example of the idea that players can become prospects later in life -- beyond those all-important teenage years. Teams so often dismiss players that have not distinguished themselves in that period that a guy like Montero -- who, to his credit, worked arduously on arm strength and pitching drills -- could fly below the radar as an eventual impact major league talent.

Granted, this model is the exception, as is Montero's general profile -- most players will either give up or just plain won't develop like Montero did and you're not going to win a lot by betting on undersized righties. But based on the inordinate amount of surplus value the Mets stand to gain from the relatively minimal resources they invested in Montero, it's fair to say that teams may want to double back on players deemed 'non-prospects' more often. It also makes one wonder how much major league talent is left on the table because said players aren't paid the proper attention during their teen years and subsequently quit.