The player-to-be-named-later in the Marlon Byrd trade could play an important role in the Mets' 2014 bullpen.

Vic Black did not spend much time with the Mets last season, but his presence in the organization itself can be considered a success. Drafted and developed by the Pittsburgh Pirates, the 6-foot-4-inch, 200 pound pitcher was one of two players—the other being middle infield prospect Dilson Herrera—the Mets received in the trade that sent Marlon Byrd to the Steel City last year.

The Amarillo native spent most of his 2013 with the Indianapolis Indians, the Pirates' Triple-A affiliate in the International League. Relying on the strength of a nearly triple-digit fastball with generous sink, Black compiled a 5-3 record with a 2.51 ERA and 2.47 FIP in 46.2 innings there last year, earning him International League All-Star honors.

You cannot teach fastball velocity, which Black has in spades. Former teammate LaTroy Hawkins deemed his arm "magic." "Some guys have late life on the ball," Hawkins said of Black. "Sometimes I play catch with him and he has, like, double life. The ball comes out of his hand and it picks up speed halfway and hits up another gear. It's weird. It's something I've never seen...I told him he has a magical arm."

In 2013, PITCHf/x recorded Black reaching as high as 98.2 miles per hour on his fastball, with an average of 95.5. In order to fully harness that magic in 2014, the flame-throwing righty needs to develop better control of his pitches. 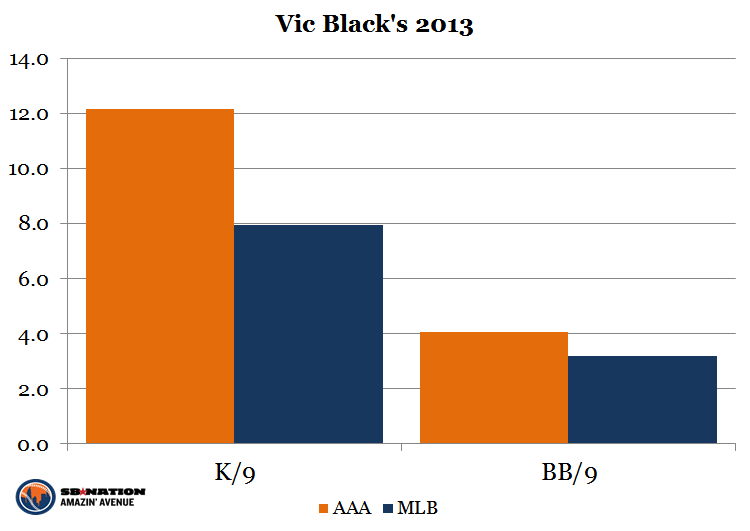 His physical mechanics appear to be fine, but he has trouble repeating his best pitches, and that is where he runs into trouble. He begins his motion with a unique flourish—pounding his pitching hand into his glove. As Alex Nelson explains, "he often needs to rush through the rest of his delivery to make sure that his arm catches up to his body's forward momentum. It's difficult to time, and sometimes the rest of the delivery will fall apart as a result, particularly his glove side, which will sometimes jerk down, which can impact command."

A lack of command has hampered Black for most of his MiLB career, but perhaps Mets coaches can help the big Texan where Pirates coaches failed. For what it's worth, in the 13 innings he pitched with the Mets in 2013, Black walked four batters, only two more than he did in his four-inning cup of coffee with Pittsburgh earlier in the year. One hopes this improvement is a reflection of how a young pitcher can improve under the tutelage of new teachers.

Although nothing is certain, given Black’s potential, his performance in his brief cameo last season, and with the present construction of the relief corps, it is safe to assume he will be in the bullpen on opening day. It is likely that Black will be used in middle relief. Depending on how successful he is at the MLB level, he has the potential to be used in high-leverage situations. Many see him as an understudy, or a potential replacement for Bobby Parnell.