Though injuries have been a constant and he's changed hands numerous times since being drafted, the 25-year-old backstop remains a potentially impact talent -- not to mention the top catching prospect in the game.

Acquired from the Blue Jays in the trade that sent R.A. Dickey to Toronto in December 2012. Originally drafted by the Phillies in the supplemental round of the 2007 draft (Lakewood HS - CA).

The 25-year-old well-rounded backstop gives Mets fans many reasons to be excited for 2014 and beyond. Offensively, he boasts the kind of power and hitting ability that you rarely see from a catcher. In 2013, for instance, he continued a streak where he has not posted an ISO lower than .230 in any of his stops at Double or Triple-A. The strikeouts remain slightly high, but with that kind of plus-power they're forgivable. Further, though he mostly looked overmatched at the plate in his first taste of major league pitching d'Arnaud still managed to keep that strikeout rate well below 20% (18.8) while posting a stellar 10.7% walk rate. As Mets hitting coach Dave Hudgens pointed out, it was pretty clear that approach was an issue for the rookie who seemed to swing from the heels at every turn. Look for that to change in 2014.

Defensively, d'Arnaud is highly mobile behind the plate -- taking full advantage of a stout, athletic frame. Additionally, he's always boasted very strong caught-stealing rates; he nabbed nearly 50% of runners in 26 minor league games in 2013, though he's typically closer to a very respectable 30% of runners caught. Beyond that, his exploits as an exemplary pitch-framer have been well documented and promise to deliver an additional source of material value that Mets fans have not been accustomed to in recent years. 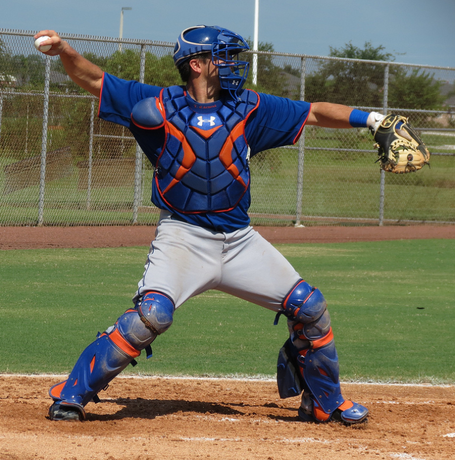 The primary issue for the otherwise promising prospect is the laundry list of injuries he's compiled as a professional. That list includes a number of semi-serious ailments including back issues, a balky knee ligament, and last season's broken foot.

Now the good news is that nearly all of these injuries have been relatively isolated -- suffered as a result of freak incidents like basepath collisions and errant foul balls. For that reason it's hard to truly affix the 'injury-prone' label -- despite the fact that he's often injured.

The bad news is two-fold: For one, any injuries to the knees or the back, especially so early in one's career, bear watching long-term -- doubly so for a catcher. Even worse, regardless of the origins or lingering nature of these injuries, lost development time is a fact. That critical gestation period is something that d'Arnaud cannot get back and in my view represents the largest hurdle to his reaching full potential.

In short, despite his somewhat colorful backstory d'Arnaud still projects as a future cornerstone behind the plate at the major league level. In many ways he's the perfect fit for this organization in that he immediately addresses a number of deficiencies within the system: a long-term dearth of catching talent, right-handed hitting prowess, and premium power. If he can put the injuries behind him and show that the large chunks of missed time has not adversely affected his development, look for d'Arnaud to make a positive impact on both sides of the ball from day one and in a perfect world vie for Rookie of the Year honors.