The big strong righty possesses a combination of stuff and polish that is rarely seen at any level.

There's not a ton left to say about the Mets latest blue chip pitching prospect and the sudden jewel of their farm system. In 11 starts for Binghamton the 21-year-old posted a 3.00 ERA along with 69 strikeouts in just 54 innings -- though it's worth noting that his ERA doubled in his final start of the season where he looked gas, allowing nine runs in three innings. The home run ball bit him a little more in Double-A than in the past (again, he allowed three in his final start) but it's hard to fret too much over a guy that held opponents to a .226 average and struck out nearly five batters for every walk in his first look at the level. In short, Syndergaard's statistical track record is outstanding, surpassing even the baselines set by the club's two other young studs before him. 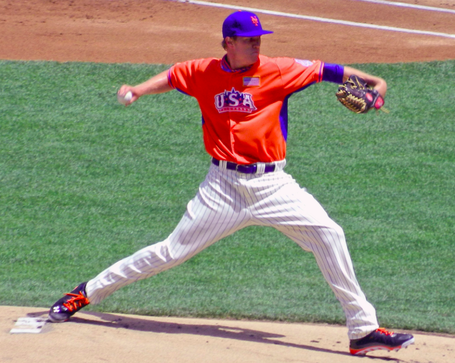 The big, strong, 6'6", 240 lbs righty dazzled scouts all season with a blend of stuff and command that doesn't come around often. With a heavy fastball that regularly works in the high-90s -- often flirting with triple-digits -- as well as a premier power curve, there were some nights that opposing lineups just didn't stand a chance. The club as well as Syndergaard himself have highlighted his change-up as an area for improvement; however, he already shows enough feel with the pitch to project plus potential. It's relatively easy -- and at this point, downright reasonable -- to imagine Syndergaard alongside Harvey and Wheeler to form a three-headed monster of right-handed size and stuff the likes of which could instantly transform the Mets into a very tough out in just about any short series they find themselves in for years to come. They'll start the top prospect in Triple-A this spring, though with a player like Syndergaard it's only a matter of time before he forces their hand with one extended run of dominance.