The speedy outfielder played his way into a role with the Mets in 2014. The question is: where, how often, and how does the roster get juggled to maximize everyone's potential?

In mid-June 2013, nearly a week after being designated for assignment by the Colorado Rockies, outfielder Eric Young Jr. was traded to the Mets in exchange for Collin McHugh. Many were dismayed by the move and considered it a net downgrade for the Mets. McHugh, with his personable nature and solid minor league stats, seemed to be the preferred option to the light-hitting, part-time outfielder. Since the trade, McHugh has posted a 9.95 ERA in four MLB starts, accruing -0.1 fWAR/-0.7 rWAR while Young hit .251/.318/.329 and stole 38 bases in 45 attempts, accruing 0.8 fWAR/0.9 rWAR. McHugh has since been claimed off of waivers by the Houston Astros, while Young, the National League stolen base king, has probably played his way into a starting role for 2014. 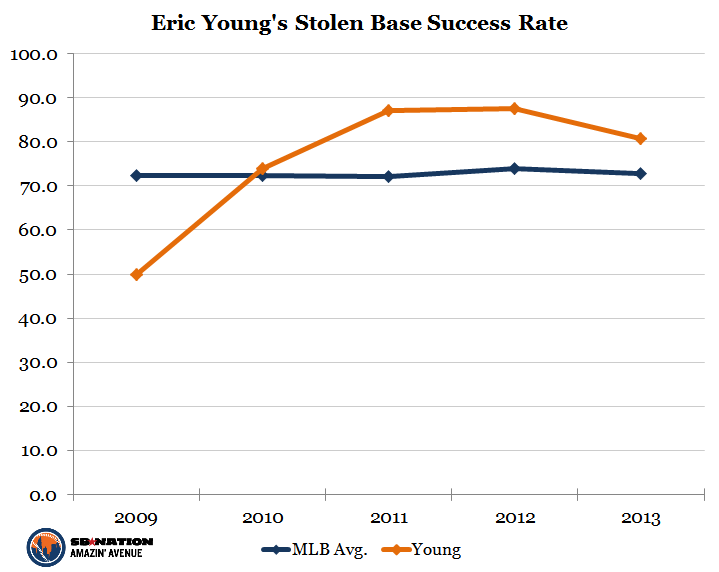 Going into 2014, Young is the most likely candidate to serve as leadoff hitter, according to manager Terry Collins. He certainly has enough speed for the role, but his career .325 OBP leaves much to be desired. In addition, his presence in the lineup likely means severely diminished playing time for defensive whiz Juan Lagares, with Curtis Granderson serving as the full-time right fielder and Chris Young playing center field—at least to start the season.

Alternatively, the team might fit Lagares into the outfield by playing Young at second base, an idea floated around this past winter, but this would come at the expense of knocking Daniel Murphy out of the lineup. This latter scenario is unlikely given that the team did not trade Murphy—and therefore presumably expects him to be a regular—and the team seems to be going with the former alignment to start spring training.