With the Mets lacking left-handed options out of the bullpen, Josh Edgin will need to perform in 2014.

A veteran lefty reliever who can throw in the mid-90s seems like a solid commodity for most major league clubs to carry, but in Josh Edgin's case, the results haven't quite fit the expected performance profile. The 27-year-old Edgin first appeared with the Mets two seasons ago, when he was able to strike out 10.27 hitters per nine but allowed a terrible 1.75 home runs per nine as well.

Last year, Edgin looked to improve on his 2012 campaign, but he instead found himself on the receiving end of an April demotion after giving up 10 earned runs in 9⅓ innings with the Mets. When he returned in June, his home-runs-allowed rate improved considerably from the previous season, but he also struck out considerably fewer batters and ended the year posting a 6.28 strikeouts per nine.

So where does Edgin fit in the Mets' 2014 bullpen? The team has a dearth of left-handed bullpen options, so that certainly works in his favor. Only Scott Rice is currently listed on the Mets' depth chart as a left-handed relief pitcher, and even if a player like Jack Leathersich or Darin Gorski starts the year in the majors, both are unproven commodities. 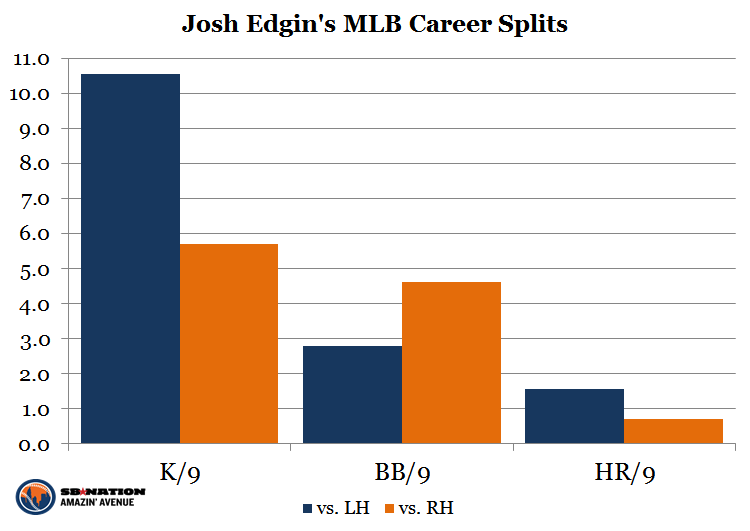 A few weeks ago, Ari Berkowitz suggested that Edgin's lack of control and movement on his secondary pitches were to blame for his lack of success. This seems to be validated by Edgin's 2013, when his changeup and two-seam fastball were above the league average in runs-against according to Fangraphs' PITCHf/x. Fangraphs' Steamer and Oliver projections don't exactly give a cause for confidence, as both predict that his strikeout rate will increase, but his walks and home runs will increase, which hopefully can be attenuated somewhat by better control of his breaking ball.

Still, there are some encouraging signs for Edgin going into 2014. First, Edgin was able to reduce the number of fly balls given up last season. This was imperative to his success, as his biggest problem in 2012 was home runs and his horrific home-run-to-fly-ball ratio of 17.2%, which he was able to bring down to 5.7% in 2013. Second, Edgin's slider improved in 2013, having gone from a below-average pitch in 2012 to an above-average pitch in terms of runs produced in 2013.