The 2009 draft pick pitched his way back into the prospect picture after years of surgery, rehab, discomfort, and disappointment. Is it possible he might pitch his way onto the Mets?

Back in 2009, the Mets did not have a draft pick in the first round of the MLB Amateur Draft because the team signed closer Francisco Rodriguez and surrendered the pick to the Los Angeles Angels as compensation. Their first pick came in the second round, 72nd overall, and with it, they selected who they felt was best player still available on the board: Steven Matz.

His selection wasn't as much controversial as it was eyebrow raising. Out of Ward Melville High School in Suffolk County—the alma mater of comedian Kevin James and professional wrestler Mick Foley, both Mets fans—Matz had considerably less baseball experience than prospects from the south and west. His choppy mechanics also led some to believe he would be injury prone. Still, the 18-year-old lefty had an electric fastball. With the crapshoot that amateur drafting is, Omar Minaya and his talent scouts decided to roll the dice and bet on upside over safety.

During extended spring training in mid May, Steven began feeling discomfort in his left elbow. Sent north to New York for medical tests, it was discovered that he had an 80 percent tear in his UCL and needed to undergo Tommy John surgery. With recovery roughly an entire year, all of the 2010 season was a wash. Over the course of the 2011 season, he attempted to get back on the mound, but scar tissue and lingering tightness foiled him at every opportunity. After a handful of doctor visits, the team decided to shut him down for the season, and another year was wasted.

Matz returned to the mound in 2012, but he was shut down after pitching only 29 innings with the Kingsport Mets because of flare-ups of discomfort in his shoulder, diagnosed as tendonitis. In the limited amount of time he spent pitching in 2012, he impressed many, including some very important executives in the Mets' front office. "We would walk away thinking 'this is electric,'" Paul DePodesta said of his stuff.

Four years after he was drafted, Matz was finally completely healthy in 2013. By the time the season ended, he reminded people why he was the first player the Mets selected in 2009. According to a scout who spoke with Newsday's Marc Carig, "there's nothing about him that would suggest that he missed a lot of time." His fastball sat in the mid-90s, flashing at times as high as 97 or 98 miles per hour.

In addition to its high velocity, his fastball also sported great running movement. His changeup generally sported a 10 miles per hour differential and generally came from the same arm speed and arm angle as the fastball. His curveball sat in the high 70s and exhibited sharp break.

None of this is to say he's a finished product, of course. As Jeff Paternostro noticed when scouting the southpaw, he threw almost exclusively fastballs. "[He] lacks confidence in his breaking ball", said the scout who spoke to Newsday. "He really needs a breaking ball he can rely on, otherwise he's a left-handed [bullpen] piece". 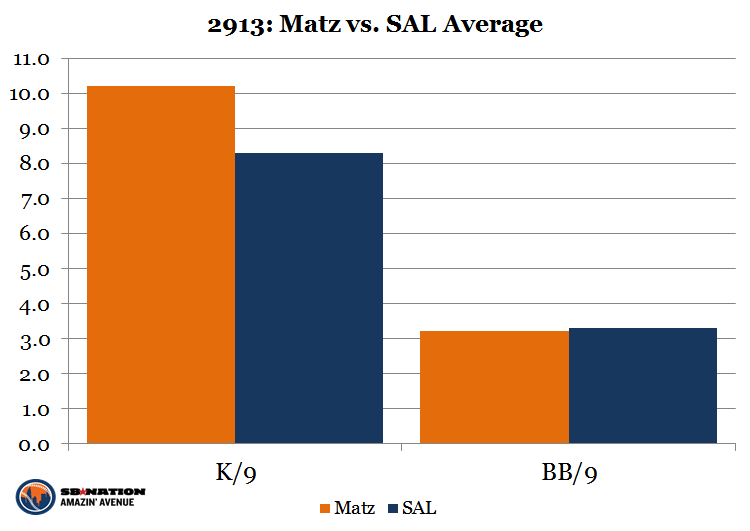 Added to the 40-man roster so the Mets wouldn't lose him in the Rule 5 draft, there is very little chance that Matz makes the team's Opening Day roster. The left-hander probably has the stuff and the skill to make it as a LOOGY, at the very least, right now, but having been down that road in the past with Jenrry Mejia, most if not all of us can agree that such a move would be a mistake.

Matz will likely be assigned to the St. Lucie Mets (High-A) to begin the year, and he could theoretically make the jump to the Binghamton Mets (AA) sometime during the season. His continued health and development would be a great boon to the organization, as he would represent yet another high-upside arm that the team seems to be producing in spades.