It's been a strange journey for one of the oldest pitchers in baseball.

By the standards of professional baseball, Bartolo Colon is old. Among major league starting pitchers last year, the 40-year-old was younger than just one of his peers, the now-retired Andy Pettitte. And the next two oldest pitchers in the league, R.A. Dickey and Hiroki Kuroda, were 38. In total, of the 226 pitchers who were primarily starters last year, just 11 were over the age of 35. But none of that stopped the Mets from signing Colon to a two-year, $20 million deal a few weeks ago.

To get such a deal at the age of 40, a pitcher must be good, and Colon has certainly been that over the past couple of seasons. Among pitchers who have thrown at least 200 innings in total over that span, his 2.99 ERA is the sixth-best mark in baseball. Only Clayton Kershaw, Matt Harvey, Johnny Cueto, Hisashi Iwakuma, and David Price have been better. Colon's 3.49 FIP over the past two seasons ranks twenty-fourth, which isn't elite but still puts him in the upper tier of major league starting pitchers.

Strictly in terms of production, maybe the Mets see Colon as the pitcher that Dickey would have been had they not traded him to the Blue Jays for Travis d'Arnaud and Noah Syndergaard.

The rise and fall of Bartolo

Signed by the Cleveland Indians as an amateur free agent in 1993, Colon debuted with the team in 1997, his age-24 season, but he was not effective as a rookie. Things picked up the following year for him, however, and he was an above-average and sometimes elite starting pitcher between 1998 and 2003, as he posted a 3.73 ERA and 125 ERA+ across those six seasons.

Colon was infamously traded by Cleveland to the Montreal Expos—a team run by Omar Minaya and potentially facing contraction at the time—for a haul of Cliff Lee, Brandon Phillips, and Grady Sizemore during the 2002 season. That winter, the Expos traded him to the White Sox for Orlando Hernandez, Rocky Biddle, and Jeff Liefer.

A free agent after the 2003 season, Colon signed a four-year, $51 million deal with the Angels. He had a 5.01 ERA in his first season there, which was poor even by the standards of the offensive environment of the American League in 2004. He bounced back in 2005 with a 3.48 ERA and the AL Cy Young award, though it's not hard to see that voters were drawn in by Colon's 21 wins and Johan Santana was robbed of that title.

Things went downhill from there. Colon made just 28 starts between 2006 and 2007 and had a 5.90 ERA and 77 ERA+ before the Angels let him walk in free agency. He signed one-year deals with the Red Sox and White Sox in 2008 and 2009, respectively, but only made 19 starts, though he was effective when he pitched. But he was out of baseball entirely in 2010.

Seemingly done as a big league pitcher, Colon had a stem cell procedure performed in an attempt to heal his ailing elbow and shoulder. The doctor who performed the operation took stem cells from Colon's bone marrow and injected them into Colon's arm. When it wound up working, the procedure—which was not available in the United States—came under scrutiny, though David Epstein of Sports Illustrated pointed out in 2011 that Colon's procedure was very similar to microfracture surgery, which was considered controversial when it was introduced but was later accepted as a common treatment for professional athletes. 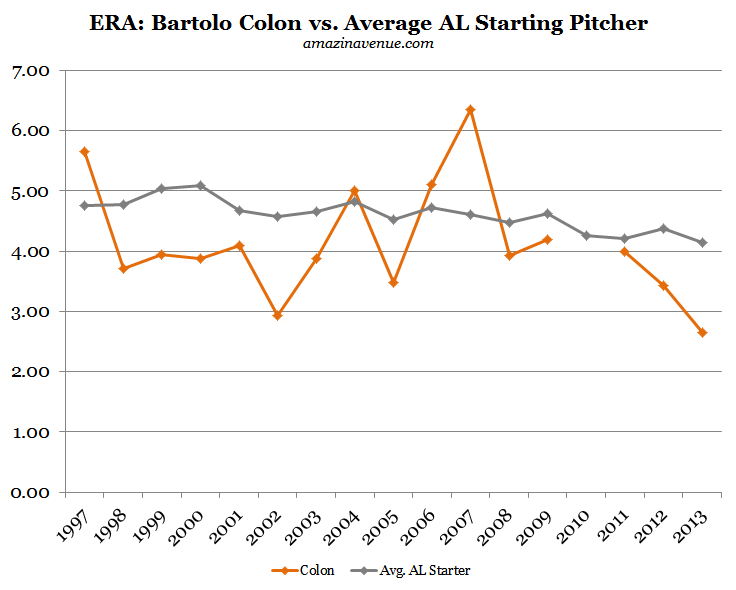 Colon's doctor did not expect the treatment to work, at least not nearly as well as it did. He signed a minor league deal with the Yankees before the 2011 season and made the team, earning a $900,000 salary. In 164.1 innings over 26 starts and three relief appearances, he had a respectable 4.00 ERA and 107 ERA+.

From there, he signed with the Oakland A's, though he got just a one-year, $2 million contract for 2012. He pitched well through 24 starts for Oakland, but he was suspended for 50 games late in the season for testing positive for testosterone, a banned substance in MLB.

Despite the suspension, Oakland re-signed him after the season on another one-year deal, this time with a $3 million base salary and a maximum of $2 million more in incentives. He made 30 starts, threw 190.1 innings, and had a 2.65 ERA last year.

Looking at the data on Colon's pitches over at Brooks Baseball, not much has changed in terms of Colon's style of pitching. Before and after his lost year in 2010, Colon relied almost exclusively on fastballs, throwing a sinker the majority of the time but also relying on a four-seam fastball. Over the last three seasons, a handful of his pitches have been identified as cutters, which can be lumped in with the other fastballs.

Across both periods, Colon threw a fastball about 85 percent of the time. Classifying all of those fastballs as one pitch might be misleading, though. Former teammate and catcher Derek Norris told MLB.com that Colon has "like nine different fastballs."

And there's no doubt that one of Colon's greatest strengths of late has been his walk rate. At 1.37 per nine innings, Colon was second only to Cliff Lee among qualified starting pitchers over the past two seasons.

Although it's not likely Colon would have been signed by the Mets if Matt Harvey were healthy, perhaps he will fill the void that was left when Dickey was traded away: an old pitcher who relies heavily on one pitch, doesn't walk many opponents, and is signed through the 2015 season. If Colon provides even close to the value that Dickey did in his time with the Mets, he'd be very much worth his contract.