The right-handed pitcher looks to improve after his best season in the big leagues.

Despite a 6.34 ERA through his first ten starts last season, Dillon Gee had the best year of his major league career. Beginning with a dominant start against the Yankees on May 30, he turned his season around and finished with a 3.62 ERA in 199 innings over 32 starts. His park- and league-adjusted 101 ERA- pegged him just below league average. Considering how poorly his year started, those numbers were pretty impressive.

What’s encouraging about Gee as he enters his fourth full season in Major League Baseball is that he’s improved every year, at least judging by his ERA. While his strikeout rate came down a bit, from 21.0 to 16.9 percent, between 2012 and 2013, he maintained good walk rates in both seasons. That was not the case as he posted a 4.43 ERA over 27 starts and three relief appearances in 2011. 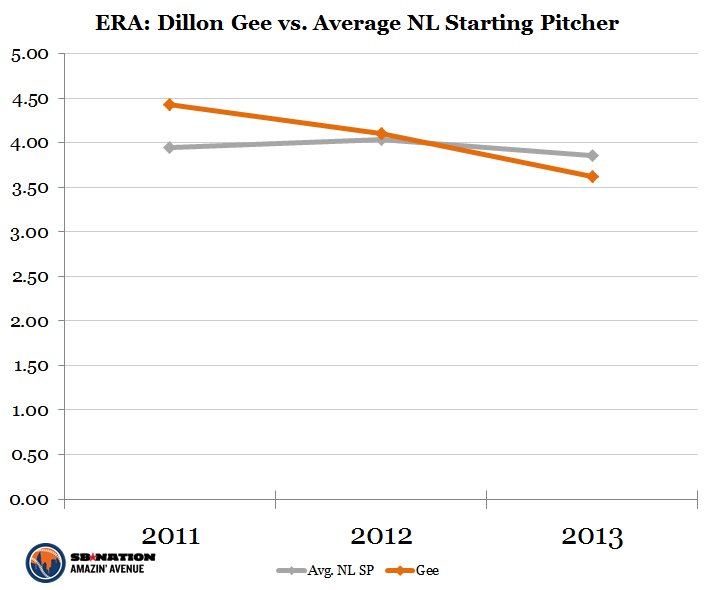 Heading into this season, the projection systems see Gee taking a small step backwards. The three projections currently listed at Fangraphs, one of which is generated by fans, range from a 3.88 to 4.17 ERA, and Baseball Prospectus’s PECOTA pegs him at 3.92. Of course, projections are generally conservative, and Gee could outperform his.

It would be foolish to isolate the latter two-thirds of Gee’s 2013 season—22 starts with a 2.71 ERA—and expect him to repeat it over the course of 2014. But his struggles last year came early in the season when his velocity was down after surgery to repair a damaged artery in his shoulder. As he gained velocity, the results got better. While a breakout year seems unlikely, it would not be surprising if Gee improves a bit more and is better than league average this season.