Jenrry Mejia made just five starts in 2013 but he managed to dazzle Mets fans in that short period of time. Can the former top prospect stay on the field enough this year to develop into a valuable starting pitcher?

In what's become a trend over the first few years of his career, Jenrry Mejia's 2013 season was very brief. The now 24-year-old right-hander got off to a late start due to elbow inflammation that cropped up in spring training and then ended his season early due to bone chips in his elbow that required surgery. For Mejia, the start and the end of his season were similar stories, a repeat of the what we'd seen before. It was what happened in the middle of Mejia's 2013 campaign, however, that was oh so different and has led Mets fans to once again dream of his future as a dominating starting pitcher.

After recovering from the inflammation, Mejia began a trek through the minors in mid-May but was again shelved after just two starts in the Advanced-A Florida State League. Mejia's rehab picked up again in late June, as he made 4 starts between the GCL and Binghamton Mets before making his season debut on July 26th against the Nationals. The former top prospect did something that day he'd never done on a big league mound: he dominated over seven innings, flashing an unbelievable slider that he didn't have before. 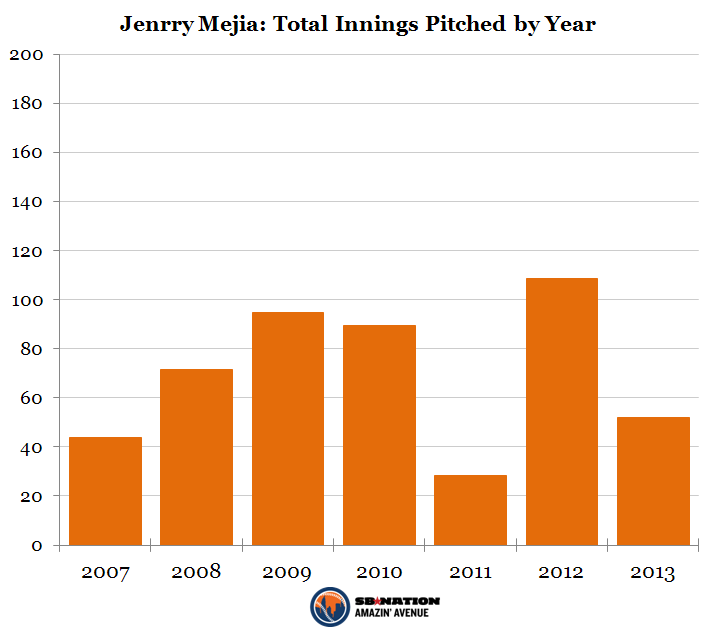 Unfortunately, Mejia's 2013 lasted just five big league starts and 27.1 innings before the bone chips in his elbow became too tough to pitch through. In those five starts, however, Mejia struck out 27 batters and walked just 4, a strikeout to walk ratio of 6.75. He threw to a lovely 2.30 ERA and 2.46 FIP and was worth at least half a win by both Fangraphs and Baseball Reference's measure. All of these numbers are incredibly small samples. What was most important was that he demonstrated that he still possesses the elite stuff that made him a top 50 prospect as a teenager.

Assuming Mejia fully recovers from his most recent surgery, the righty will head into spring training with an excellent shot at breaking camp as the Mets' 5th starter. While he will compete with the likes of John Lannan, Daisuke Matsuzaka, Rafael Montero, and Jacob deGrom, Mejia seems like the obvious choice to get the job thanks to his high upside. Even if fully healthy, it's unlikely he'll throw an entire season due to what should amount to a strict innings limit but the question with him will continue to revolve around his health. His ability to stay on the field certainly isn't a given but we do know he can thrive on the mound when healthy. For the Mets, a healthy Mejia in 2014 would be a fantastic bonus to add to the organization's already impressive stash of young pitching.