A little over a year ago, MLB Network created a bit of a stir when it included Daniel Murphy among the top ten second basemen in the game. Judging by his 3.0 fWAR, which was the seventh-best mark at the position, he lived up to that billing. His 1.8 bWAR, however, ranked him thirteenth among the seventeen qualified players at the position.

At the plate, Murphy only had a decent years. His 106 wRC+ ranked eleventh at second base, and his defense was poor in comparison to his peers. Fangraphs’ baserunning runs above average metric loved Murphy, though, which at least partially explains why he fared much better there than he did at Baseball-Reference. 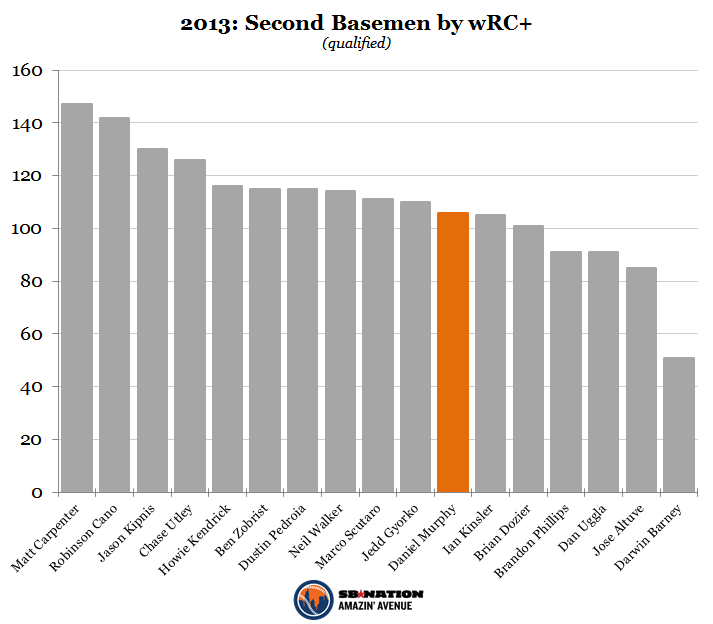 A couple weeks ago, Murphy and the Mets avoided arbitration and agreed to a $5.7 million contract for 2014. Given the market rate of free agents, he’s incredibly likely to provide at least that much value to the Mets, even if he doesn’t improve upon his numbers from last year.

For his career, Murphy has hit .290/.333/.424 with a 107 wRC+ and has neither struck out nor walked much. There’s a little bit of power in his bat, but not a ton, and he’s heavily dependent on hitting the ball where they ain’t. So it makes sense that all of his projections don’t deviate very much from those numbers.

When looking back at Murphy’s numbers, his 2011 season look like an outlier. While his numbers were most impressive in 2008—he had a .397 OBP that year—Murphy made just 151 plate appearances that season, and the larger single-season samples are in line with his career numbers.

None of that makes Murphy a bad player, of course. Entering his age-29 season, he’s still in his prime, and it’s not impossible that he’ll improve a bit compared to the last couple of seasons. There was plenty of doubt about Murphy’s ability to even play second base when he moved to the position, and although he won’t be winning awards for his defensive work, he’s been capable there.

Given the depressed hitting environment in Major League Baseball, a return to his higher on-base percentages of the past is unlikely, but depending on your preferred method of calculating WAR, he could very well finish among the top ten at the position in 2014, too.