Bobby Jones had his shining moment on Oct. 8, 2000 in Game 4 of the National League Division Series against the San Francisco Giants. The right-hander delighted the Shea crowd with a one-hitter that helped boost the Mets' postseason run.

A common name achieved an uncommon feat in franchise and baseball history.

More From The Top 10

Dwight Gooden came to Queens with a flourish—racking up hundreds of strikeouts at the ripe age of 19. His best game in his rookie campaign in 1984 was a September start against the eventual division champion Chicago Cubs.

A forgetful 1991 Mets season was capped off by a memorable outing by David Cone at Veterans Stadium.

More From The Top 10

In the annals of sports, the more recognizable and highly-regarded Bobby Jones is a golfer. However, in Game 4 of the 2000 National League Division Series against the San Francisco Giants, it was one of history’s the less-heralded Bobby Jones who got all the attention.

After nabbing the NL Wild Card for the second consecutive season, the Mets began their road to the World Series in San Francisco’s Pacific Bell Park. New York lost the opener, but managed a split in California with a thrilling extra-inning triumph in Game 2. Game 3 at Shea Stadium had a similar ending, with Benny Agbayani’s homer in the 13th-inning giving the Mets a 2–1 series edge.

For Game 4 at Shea, manager Bobby Valentine gave Bobby Jones (born Robert Joseph Jones) the ball and a chance to send the Mets to the NLCS. Jones had played for the Mets since 1993. He won 15 games in 1997, earning him his one and only All-Star Game appearance.

Although he had no playoff experience (he was left off the 1999 postseason roster), Jones was up to the task. Following two routine outs, Jones struck out Bonds swinging to end the top of the first, and the momentum built from there. 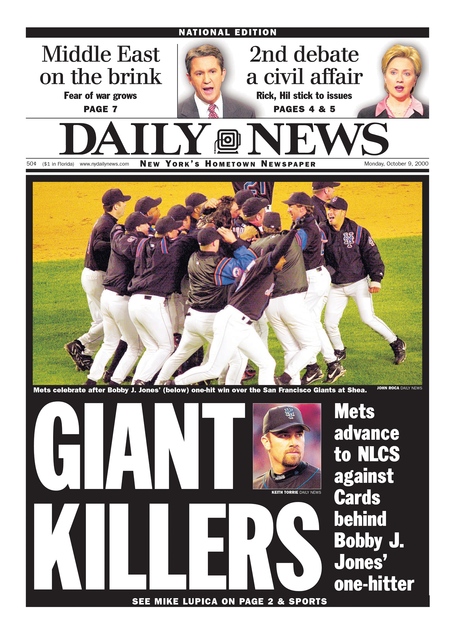 The Mets offense helped out in the bottom half of the inning—especially Robin Ventura. After Mike Piazza walked, Ventura hit the first pitch he saw against San Francisco starter Mark Gardner over the right center field fence to put the home team up 2–0.

Jones proceeded to retire the next nine Giant batters in order—which included another strikeout of Bonds. New York was unable to generate much more with the bats, and they maintained a two-run lead heading into the fifth.

That’s when Kent laced a ball off Ventura’s glove and into left field for San Fran’s first hit of the game. A pair of walks loaded the bases and created what would be the only nervous moment for Mets fans. Luckily for Jones and the Mets faithful, Gardner was up to bat. He promptly popped out to second baseman Edgardo Alfonzo and the Giants’ side of the scoreboard remained barren.

Gardner was not as fortunate when facing his counterpart. Jones did strike out swinging, but the third strike pitch bounced away from catcher Doug Mirabelli, allowing Jones to reach first base safely. The Mets took full advantage of the miscue. Late-season star Timo Perez hit a double. With runners at second and third, Alfonzo got a two-bagger of his own that scoring Jones and Perez to make it 4–0.

Gardner departed in favor of Doug Henry, but the damage had already been done.

Jones continued to frustrate the Giants, and did not allow anyone to reach base for the remainder of the game. Applying more precision than power, Jones recorded five strikeouts. However, his effectiveness resulted in the lack of solid contact off the bats of San Francisco’s hitters.

The final out was made by Bonds, who sent a fly ball in the director of Jay Payton in center field. Payton squeezed it, securing a NLDS victory for the Mets and for Bobby Jones. At the time, it was just the second one-hit shutout in postseason history.

The momentum generated in that playoff series would carry over into the NLCS against the St. Louis Cardinals. New York did not need much in the way of magic, as they cruised to a five-game victory, clinching again at home. Jones pitched two more times in this postseason, going 0–1 with the loss coming in Game 4 of the World Series. That would turn out to be his last game with the Mets, as he left via free agency.

But the best memory he left was that sterling performance on October 8, 2000—when the right-handed Bobby Jones became a renowned figure in New York Mets history.