A look at Torres's splits between the starting rotation and the bullpen.

Share All sharing options for: Carlos Torres: Starter or reliever?

In our season preview series, it became evident that over a small sample size, Carlos Torres performed much better as a reliever than a starter. With Terry Collins indicating earlier this week that it appears Torres will make the team as a reliever, with spot-start potential, let's examine why Torres has found better success out of the bullpen.

When trying to figure out why a pitcher has better success as a reliever rather than a starter, there are a few clear things to consider. First, does the pitcher have a preference pitching out of the stretch? Relievers are more likely to come into the game in situations with men on base, and therefore, are forced to pitch out of the stretch more regularly. And second, do opposing hitters quickly adjust to the pitcher's offering of pitches? How many quality pitches does Torres offer? How successful are hitters the more that they face him?

While it is evident that Torres pitches well with men on base, how does he perform based on the number of times opponents face him during the course of a game? This number is difficult because, as a reliever, he will often only face a hitter once. Between 2012 and 2013, he only faced 22 batters a second time within one game as a reliever. To broaden the sample size, let's look at his numbers as a starter in 2013.

Interesting. While Torres wasn't very good at any point as a starter, he seemed most effective the second time he faced a hitter. Of course, these numbers are a bit skewed by sample size—he only started nine games in 2013—but I was hoping they would help explain his struggles as a starter. If Torres was most effective the first time he faced an opposing hitter, it would give merit to the argument that he performs better as a reliever since he usually only has to face an opposing hitter once in a game. As data goes, the numbers don't always tell the story that you are expecting.

So we have a mixed bag. Torres seems to pitch better with men on base, which helps explain his favorable numbers as a reliever, but the number of times he faces an opponent doesn't offer any conclusive evidence in favor of him pitching out of the bullpen.

Let's look at one last factor important to a pitcher's success in any role: pitch offerings. When Carlos Torres signed a one-year deal to pitch in Japan after the 2010 season, he had completely abandoned his four-seam fastball in favor of almost exclusively using his cutter. In fact, according to Brooks Baseball, after throwing 238 four-seam fastballs in 2009, he didn't throw a single one in 2010. Upon his return to the big leagues in 2012, he learned to balance his pitch selection using both the four-seam and cutter, as well as an occasional changeup. He has only started nine games since 2012, but with this improved pitch portfolio and effectiveness with each of those pitches, it seems that he could handle a starting role. 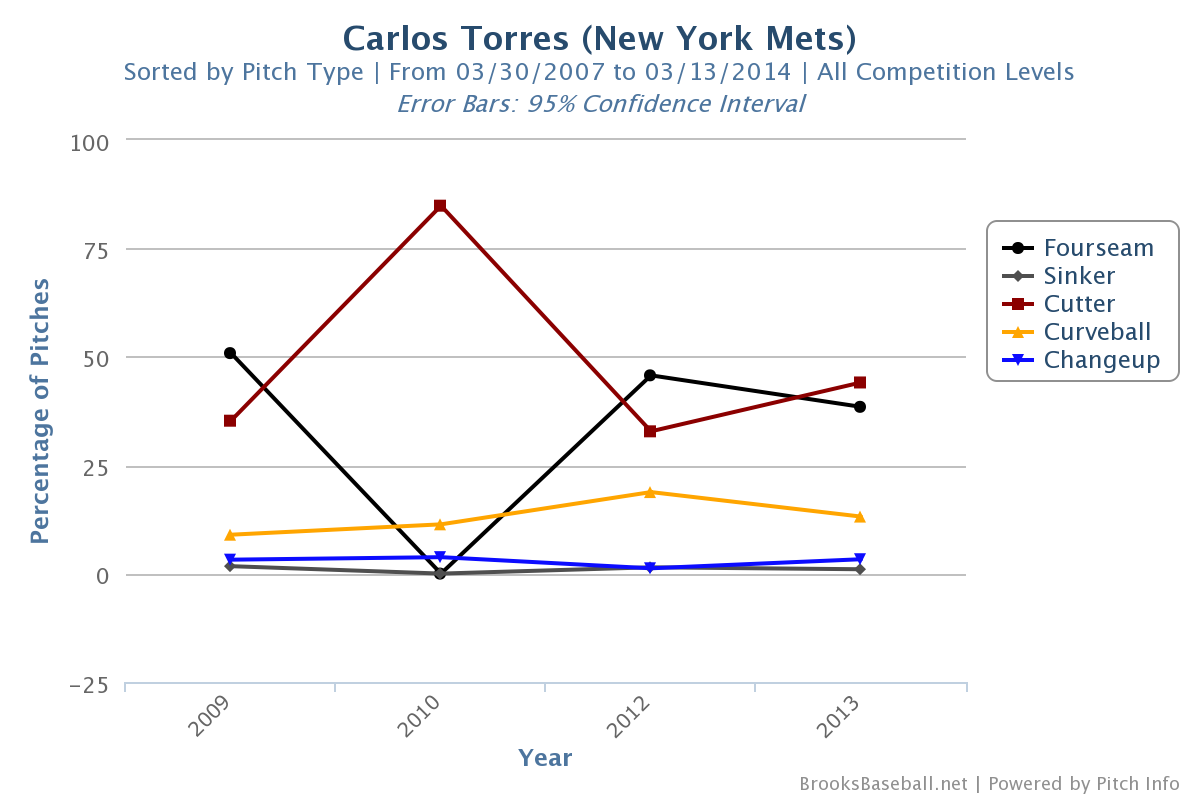 Carlos Torres offers Terry Collins versatility out of the pen. He can pitch in relief, as he did effectively in 2013, and seems to shine with men on base. His ability to take the ball as a starter adds value. Despite some rocky numbers in 2013, it appears that with more opportunity, Torres could be effective as a starter, too. It is difficult to pinpoint exactly why he has found better success out of the bullpen, but there is hope for the Mets that he can flourish in both roles.