After a dreadful start to his Mets career, something changed in Daisuke Matsuzaka to make him more effective. What was it?

When the Mets signed Daisuke Matsuzaka late last season, I thought it was a punishment. Disciplinary action for the fans dumb enough to still be watching on a nightly basis in August and September. If the Mets' play up to that point hadn't taught us a lesson, watching Dice-K, and his deliberate wind-up and awful performances would do the trick.

The veteran Japanese hurler will be one of many pitchers competing for a spot in the starting rotation.

Things I would rather do than watch Dice-K pitch

These are a few of the things I would rather do than watch Daisuke Matsuzaka pitch.

Season Preview: Daisuke Matsuzaka Things I would rather do than watch Dice-K pitch

At first, my fears found truth. It took him 268 pitches to record his first 37 outs as a Met. Three starts, 12⅓ innings, fifteen earned runs, and three losses later, things looked pretty bleak. The Mets were playing meaningless games in September and Dice-K was going to make each of his starts as painful as possible to watch.

Then something happened. Something changed. Miraculously, Dice-K would allow only four earned runs in his final four starts, all games in which the Mets won.

So what happened? How did Dice-K go from a pitcher who could barely record an out to one that proved to be quite reliable?

The first thing that sticks out when looking at the the sudden change in Matsuzaka's performance is the number of days of rest he received between each start. In his three worst starts, he only had the normal four days of rest. In his three best starts, he got an additional day to prepare. The difference in results is striking.

That's nice and all, but this may be a case where a convenient statistical pattern obscures a more meaningful change which caused a greater improvement in performance. It was after a golf outing with pitching coach Dan Warthen when Dice-K really turned his pitching around. He changed his mechanics, creating more balance by locking his right foot snug against the rubber and keeping his right leg straight, a suggestion made by Warthen.

He seemed to be throwing harder, too. And his breaking balls had a sharper bite. Warthen had Matsuzaka throw his slider more on the seams, to take some spin off it and make it tighter, and had him hold his curveball deeper in his hand, so that it would not float high in the zone.

Let's take a look to see if the data supports this story.

First, take Matsuzaka's velocity. Looking at the difference in release speed between his first three starts and his final four starts, we can see a significant change in only one of his pitches. And it was with his least frequently used pitch, the splitter, with an increase in release speed of 4.65%. He threw his splitter harder, but his other pitches remained the same speed.

How about his slider? Did his spin get tighter? Looking at the chart below, ignore the mislabeled dates (Brooks Baseball is almost perfect), and focus on the opponents to see the horizontal movement in Dice-K's slider last season. It is clear that in his final three starts, he found a lot more consistency in movement. 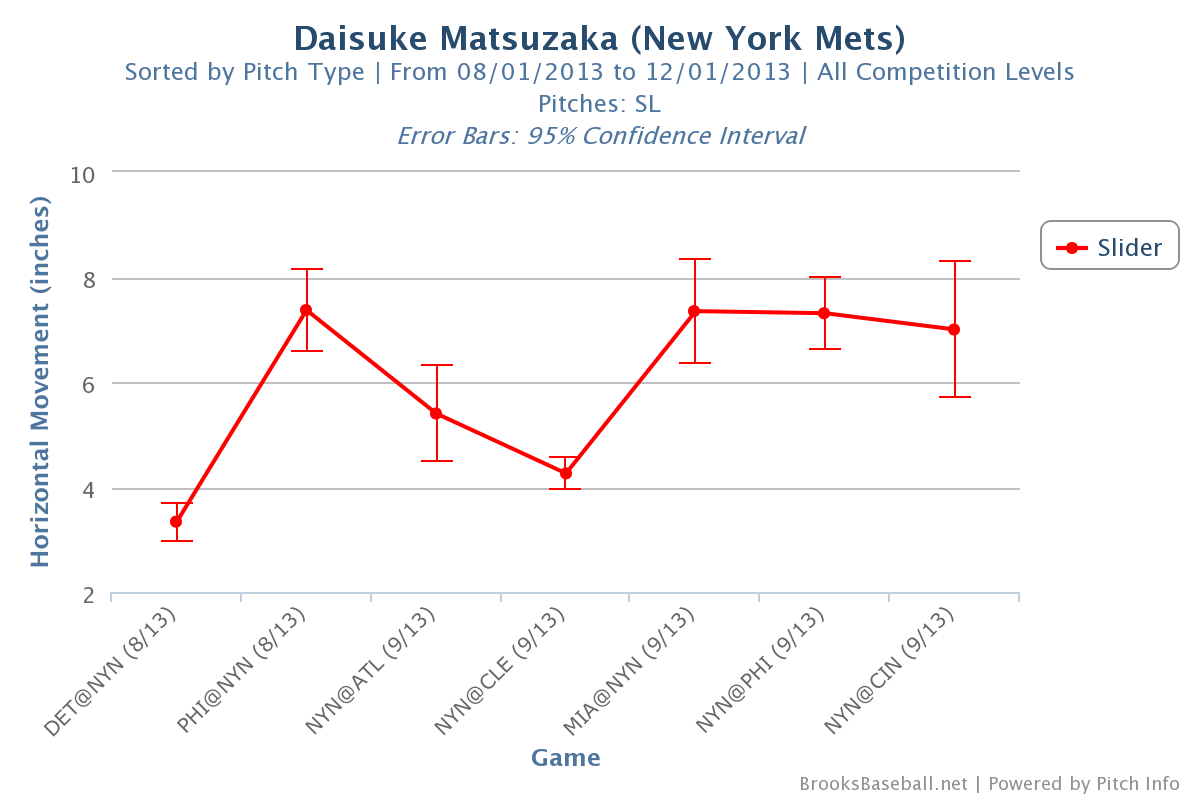 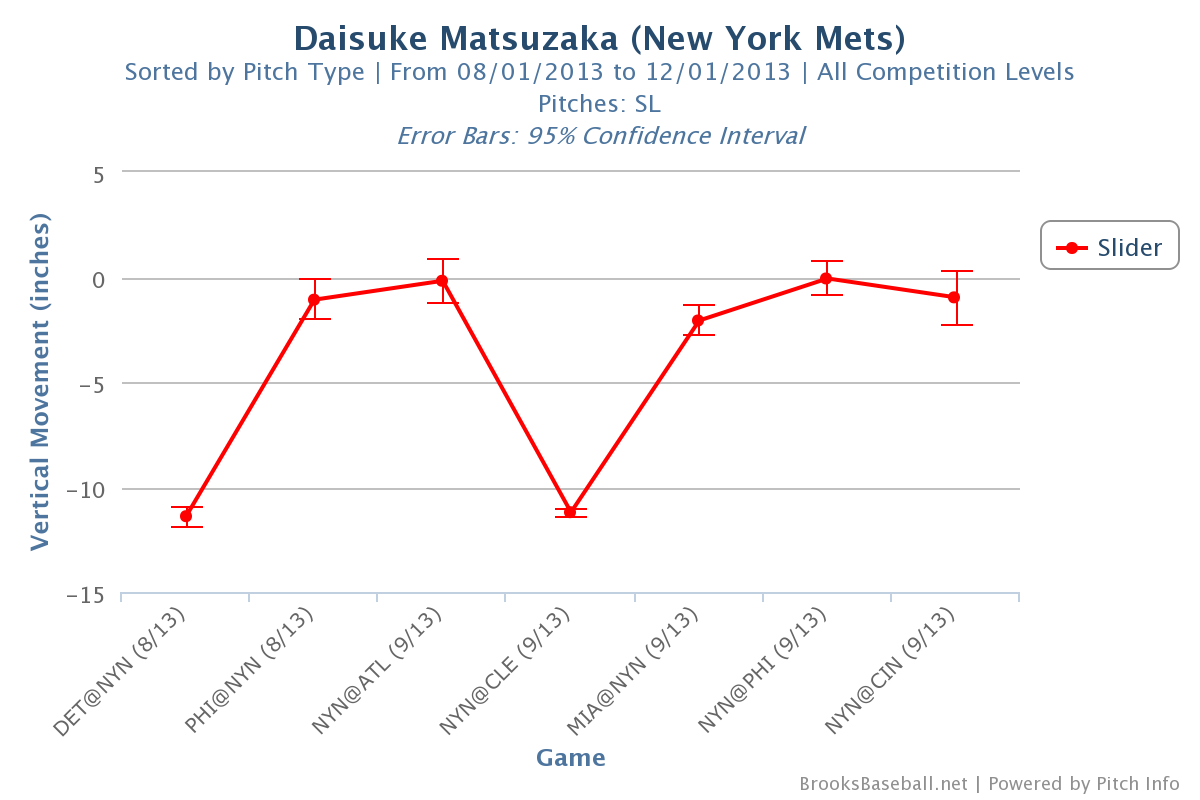 Finally, let's look at the difference in Matsuzaka's curveball after following Warthen's advice to hold the ball deeper in his hand. The chart below shows that on eight occurrences during his first three starts, his curveball found the strike zone and was hit pretty hard. 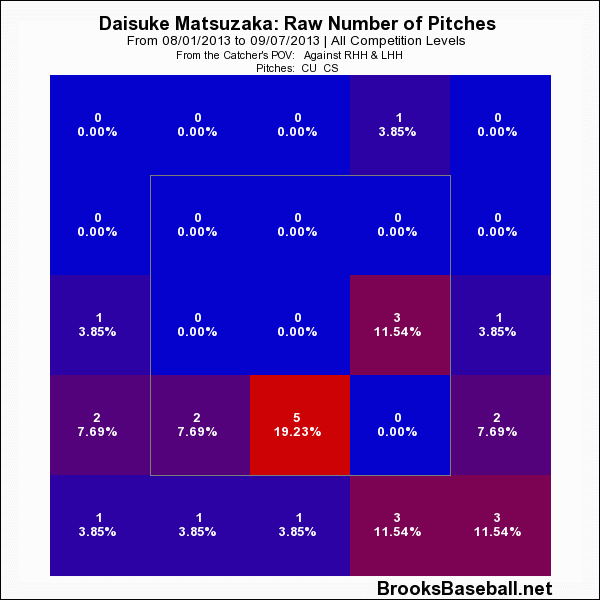 The next chart shows Dice-K's curveball placement in his final four starts. You can see that he had fewer pitches up in the zone, as Warthen suggested would happen. What is interesting, however, is that opposing hitters still hit his curveball pretty soundly, even down in the zone. 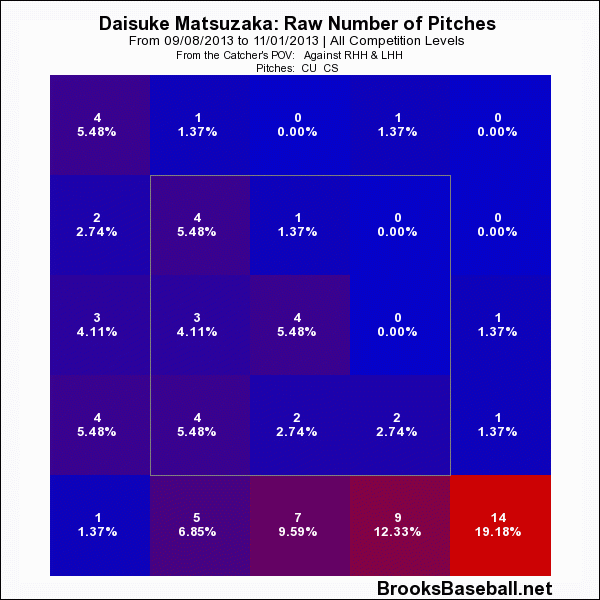 With injuries and young arms not quite yet ready to join the rotation, Dice-K will get a chance to play a key role in the back of the Mets' rotation to start the season. It will be interesting to see if his late-season turnaround in 2013 translates into continued success in 2014. And whether the ability to properly space his starts, hold his new mechanics, or a combination of both prove the recipe to get the most out of his arm.