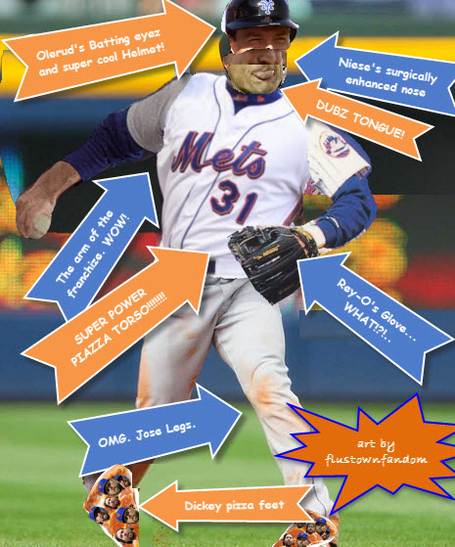 I beheld the Met — the miserable monster whom I had created. He waddled around the baseball diamond; and his eyes, if eyes they may be called, were fixed on me. His jaws opened, and he muttered some inarticulate sounds, while a tongue licked his cheeks. He might have spoken, but that could've been the wind passing through his massive nose; one hand was stretched out, seemingly to contain all grounders; and in his other hand, his fingers griped a ball so tight all seams appeared to vanish.

I took refuge in the bedroom belonging to the apartment which I inhabited, where I remained during the rest of the night, tossing and turning in the greatest agitation, listening attentively, catching and fearing each sound as if it were to announce the approach of the demoniacal corpse to which I had so miserably given life.

Oh! No mortal could support the horror of that countenance. A mummy again endued with animation could not be so hideous as that wretch. I had gazed on him while unfinished; he was ugly then, but when those muscles and joints were rendered capable of motion on top of dickey pizza feet, it became a thing such as even Dante could not have conceived. But, boy-oh-boy, could it play ball!

(Thank you to slightlyawkWard for the concept)