Juan Lagares and pitches outside of the strike zone

Juan Lagares struck out a lot last season, but he was one of the best hitters in making contact on pitches outside of the strike zone. What does this mean?

Share All sharing options for: Juan Lagares and pitches outside of the strike zone

We know that Juan Lagares likes to swing at pitches outside of the strike zone. What is surprising is how often he makes contact with those pitches. It's also surprising that he's aggressively chasing bad pitches, considering pitchers tend to like to pound him with pitches inside the strike zone.

The chart below from Brooks Baseball highlights the trend in Lagares's aggressiveness at the plate throughout last season. He clearly had a period of self-correction at the end of the year after being extremely aggressive against left-handed pitching. 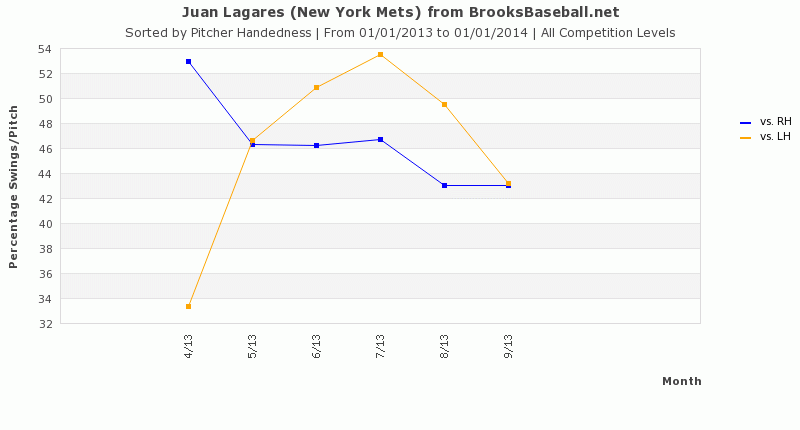 His strike zone discrimination followed the path of his aggressiveness. In July, when swinging at essentially every pitch he saw from a left-handed pitcher, his judgement on balls and strikes was completely lost. 18 percent of Lagares's plate appearances came during the month of July, which helps explain his high O-Swing% for the year. 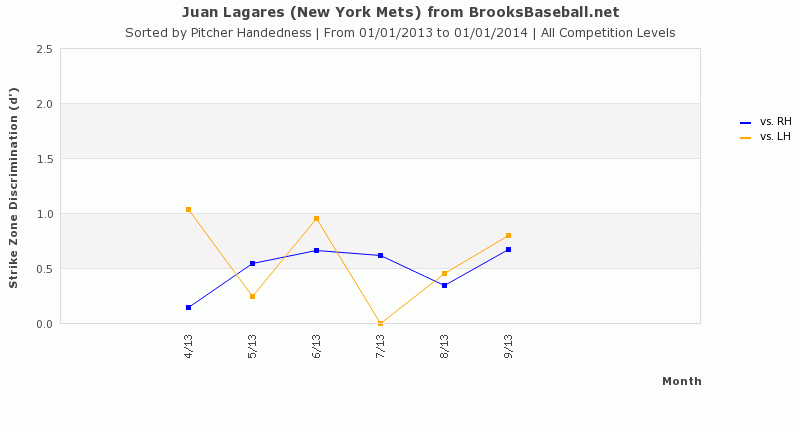 The first two charts make it seem like Lagares would have struck out frequently in July, but that's where his amazing O-Contact% came into play. Despite swinging at more pitches outside of the strike zone, Lagares had fewer whiffs per swing. 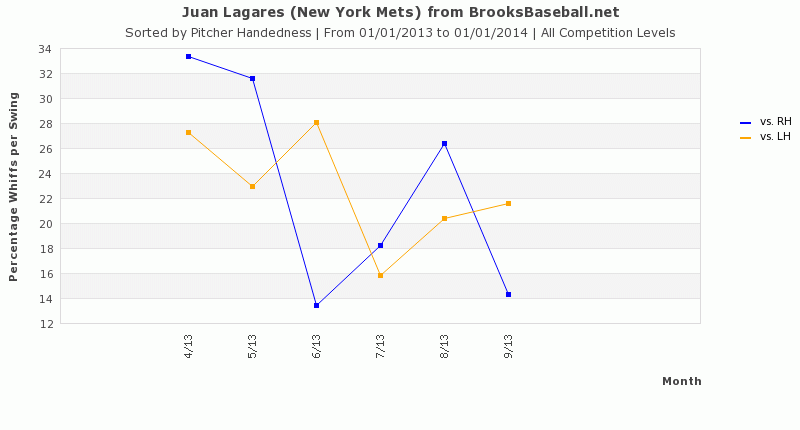 We now know that Juan Lagares swings at a lot of pitches outside of the strike zone, did so mostly in the month of July last season, and despite swinging at bad pitches, was able to make contact quite frequently. What we also know is that pitchers decided to ignore the fact that Lagares is prone to chasing pitches but chose to throw frequently inside the strike zone against him.

What does this all mean for a defensive wizard of a center fielder who the Mets hope can develop a more patient approach to raise his on-base-percentage?

First, the fact that Lagares puts a lot of balls in play by making contact means he is a prisoner to his batting average on balls in play. Last season, he had a .310 BABIP and did that with a below-average line drive rate and high ground ball percentage.

Second, as long as he remains more aggressive outside of the strike zone than on pitches inside the zone, pitchers will continue to get ahead in counts by throwing strikes without fear of retribution. Pitchers were able to throw a first strike 63.4 percent of the time on Lagares, a rate slightly above league average.

It is worrisome that Lagares's .242 batting average last season came with an above-average BABIP and an unusual ability to make contact on bad pitches. He only walked in 4.8 percent of his plate appearances, while striking out 22.8 percent of the time. If he does not improve on his pitch selection, it seems logical to believe that his already poor strikeout and walk rates will deteriorate.

All statistics courtesy of FanGraphs unless otherwise noted.