The Mets and Google

What can the series of powerful internet tools tell us about the Mets and, more specifically, their fanbase?

Share All sharing options for: The Mets and Google

As most people know, beyond its outstanding search engine, Google produces a number of interesting and informative web-related services and products. Some of those resources are dedicated to giving us insight into the plethora of underlying Google search statistics on any and all of the topics we may be curious about.

Today, I am curious about the Mets.

(NOTE: All Google search data in this piece relates to the 2004 to the present period.)

What Do People Search When They Search For The Mets?

First and foremost, using Google Trends, let's understand what people type into Google the most when they want to find the New York Mets:

So when people want the Mets, they type 'mets' far and away the most often. Makes sense, in a blatantly obvious sort of way. Also not all that surprising is that the most common non-Mets search topic by those who end up on the Mets is, indeed, the Yankees.

So let's review what we've learned: The Mets stink and they have an ugly face and a big butt and their butt smells and they like to kiss their own butt. Except people want to work for them. And they better sign Stephen Drew already!

Also, as we already know David Wright gets folks all hot and bothered. Matt Harvey can ruffle feathers. And boo Wilpons.

A Sad Story of Flagging Interest

Now that we know what people interested in the Mets search, here is the full picture of all Mets Google searches since 2004:

Basically it's just another reminder about how things were great in 2006—and how they have been less so every day since.

It is sort of interesting to observe the cyclical nature of interest in the Mets (and baseball, in general). Interest is usually at its highest in April when baseball is back and everyone is feeling good about their team's chances. That sentiment seems to wane throughout the summer, but it usually spikes around the trade deadline. It then either plateaus or nose-dives based on the fortunes of the club. Unfortunately for the Mets, recent years have seen a precipitous decline after July.

Note the spike in interest that Johan's no-hitter generated in early June 2012, which actually became the highest data point for the entire 2012 season.

This led me to wonder about the correlation between attendance at the ballpark and interest on the Internet. Specifically, how well does the much publicized decline in attendance at Citi Field correspond with the obvious decline in Google search frequency that we saw above? Fortunately, we have those numbers at our disposal.* 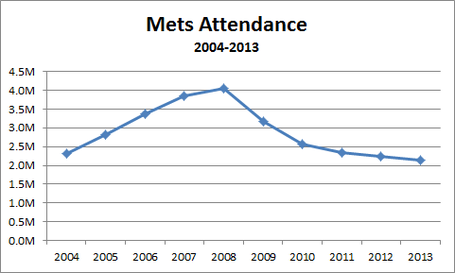 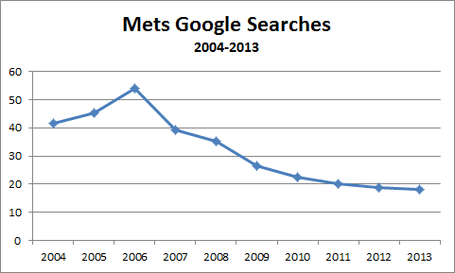 Though fans stopped showing up to the ballpark pretty abruptly following the 2008 season, it seems that Internet fans had an even shorter lead time, continually losing interest following the watershed 2006 season and then every year since. In any case, neither cares much today. 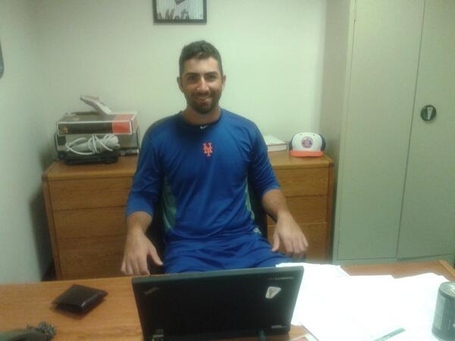 Where Do People Search Mets?

(NOTE: These data are normalized. As Google states, "Just because two regions show the same number for a particular search term doesn't mean that their absolute, or total, search volumes are the same. Data from two regions with significant differences in search volumes can be compared equally because the data has been normalized by the total searches from each region.")

So now that we know what and how people are searching Mets, let's figure out where they're doing so. First, let's look at this globally. Here's an international breakdown of where people are actively searching the Mets:

Yeah, you're seeing that right -- the highest percentage of Mets searches relative to the total number of searches in that region took place in Estonia. Estonia.

Obviously if we're talking in sheer volume terms it wouldn't really be close but still, very odd. Some light research brings me to the likely explanation: Mets is a common surname in Estonia.** So we're probably looking at some unrelated overlap here.

Or perhaps the Wilpons operate a shell company in an Internet cafe somewhere in central Estonia whose sole purpose was to make David Wright the #FaceofMLB. I choose to believe the second hypothesis—you know, Occam's Razor.

Probably more instructive—and definitely more interesting—is a regional perspective on the matter. In other words, what are the hot spots in the United States—and more specifically, the tri-state area—where high concentrations of people care enough to search for the Mets?

If we toggle to metro markets, though, the results are a little more telling:

Everything pretty much makes sense. Lots of interest in the tri-state area. Hotbeds of interest around cities with divisional rivals as well as other Major League Baseball teams. Massive interest in Florida thanks presumably to transplanted New Yorkers, not to mention spring training and minor league operations in the state.

And then there's Minnesota. At times the Minneapolis-St. Paul metro market generated nearly as much interest in the Mets as Atlanta and Philadelphia. Seems odd until we stop to think about one thing: Johan Santana. And the numbers seem to agree as most Mets searches in that market during the period took place after the Santana trade.

Can't blame them; had we lost our homegrown, multi-Cy Young winner I'd probably follow him in another city as well. Hell, I'm still following R.A. Dickey pretty closely. (In fact, Toronto Blue Jays Google searches within the New York metro market spiked in 2013 after relatively regular activity prior, so it looks like I wasn't alone.) A more comparable situation is Tom Seaver; perhaps older Mets fans can confirm this experience since Google wasn't quite off the ground at that point.

Finally, there's the option to view results by city. Let's group cities by state before looking at the final results:

Your top ten 'Mets towns' in the Garden State:

Despite leaning more towards the Yankees and Red Sox historically, there exists a good amount of interest for the Mets in the Nutmeg State (/bows chest out):

Not surprisingly, Mets interest in Connecticut seems to be concentrated in the southwestern corner of the state -- with a rather large outlier up in Bristol for some strange reason. And graphically:

They call it Strong Island for a reason; the island is home to almost all of the most devoted Mets town in the state. All except for little old Binghamton, who just so happens to host the club's Double-A squad dating back to 1992. In any case, Long Island—specifically, Levittown—is undoubtedly the heart of Mets nation. Take a look at the uber-concentration graphically: 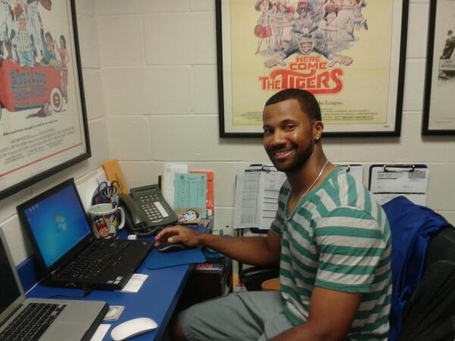 Fun With Correlation (But Not Necessarily Causation)

Google Correlate is another nifty little tool, similar but sort of the inverse of Google Trends in that one can find out what other terms correlate to their desired search term.

The following is a list of search terms whose Google search patterns correlate most closely with 'New York Mets' as of March 19, 2014 at about 4:30 EDT:

Once again, these terms aren't necessarily linked -- but in many cases they pretty clearly are (e.g., mets tickets, mets history, decorative concrete, etc.).

There seems to be a strange resemblance between the search patterns of the Mets and golf. Perhaps it's just the shared seasonality component? Or maybe something about the most recent vintage of Mets baseball drives Mets fans to the maddening, often demoralizing pastime.

Also, I'm having some fun imagining soon-to-be brides searching for the newest craze in wedding hair: The Jenrry.

In summation, Google knows everything. So be careful what, where, and how you search when you search Mets. 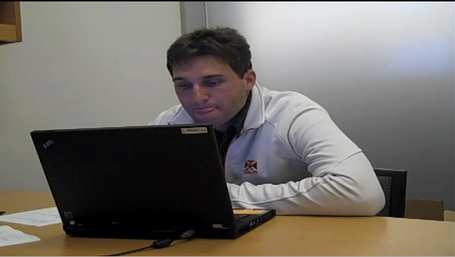 **Mets is actually the 42nd-most common surname in Estonia as of 2008, on par with Ramirez in the United States.