MLB and MLBPA announce changes to the Joint Drug Agreement

Share All sharing options for: MLB and MLBPA announce changes to the Joint Drug Agreement

Major League Baseball and the MLB Players Association have reached an agreement on a stricter performance-enhancing drug policy. The agreement increases the number of random urine tests during the season from 1,400 to 3,200, representing more than a two-fold increase in the number of tests per year. An additional 400 random blood tests to screen for the use of human growth hormone (HGH) will also be performed during the regular season in addition to the 1,200 mandatory tests already carried out during spring training under the current agreement. 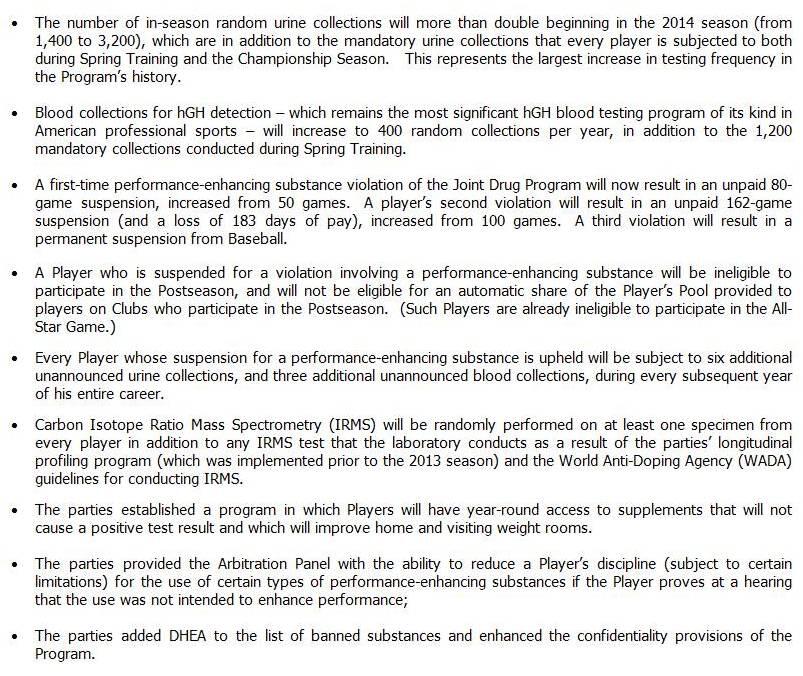 Further, one random sample per player will be tested each season using Carbon Isotope Ratio Mass Spectroscopy (IRMS), a technique which can be used to determine the presence of synthetic hormones such as testosterone or human growth hormone. Previously, this sensitive test was only carried out in the event that a randomly tested sample had a greater than four-to-one testosterone-to-estrogen level. The league has also added dehydroepiandrosterone (DPEA), a testosterone precursor, to its banned substance list.

In addition to increased testing frequency and stringency, players who test positive for performance-enhancing substances will also be subjected to stricter penalties. A first offense will now result in an 80-game unpaid suspension, while a second offense will be penalized with a 162-game suspension, along with a 183-game loss of pay. A third violation will result in a lifetime ban from baseball.

To eliminate the possibility that players may inadvertently ingest banned substances through tainted dietary supplements as has been previously claimed in the past, MLB will provide players access to approved supplements which are free of banned substances. The league will also improve exercise facilities for both home and away teams to provide a more effective workout environment. An arbitration panel will also be formed, which will have the ability to reduce the penalty for a positive test on a case by case basis if a player can demonstrate that the substance was not taken for the purpose of enhancing performance. After a number of embarrassing public leaks of medical information, the league has also vowed to improve the confidentiality of information acquired during drug testing.

While it is likely that some players will always look for ways to circumvent drug-testing policies, these changes represent a significant improvement to the existing drug agreement.