The crafty veteran switches coasts and leagues once again to lead a much younger Mets rotation.

In this market, a two-year, $20 million dollar deal for a starting pitcher coming off of a 3.9 fWAR season with a sparkling 2.65 ERA would appear to be quite the steal. The contract looks a little bit worse when it’s given out to a 40-year-old with a history of performance enhancing drug use, a controversial career-reviving surgery, and a 265-pound bull’s eye for writers throw at with bad fat jokes.

Still, the Mets appear to have done well for themselves in signing Bartolo Colon to be their short-term Matt Harvey replacement. The right-hander enjoyed a magnificent season with the A’s last year, posting a stellar rate of 1.37 walks per nine, .66 HR/9, and 3.23 FIP, to go along with the numbers mentioned above. He also went 18-6, which can be fun to look at.

The exceptional year was preceded by two nearly-as-impressive campaigns. A testosterone suspension in 2012 limited Colon to only 152.1 innings, but also a 2.4 fWAR. In 2011, perhaps more importantly to Mets fans, Colon enjoyed success outside of the pitcher’s haven in Oakland, and had a successful comeback season (164.1 IP, 2.8 fWAR) pitching for the Yankees in a much more hitter friendly park. 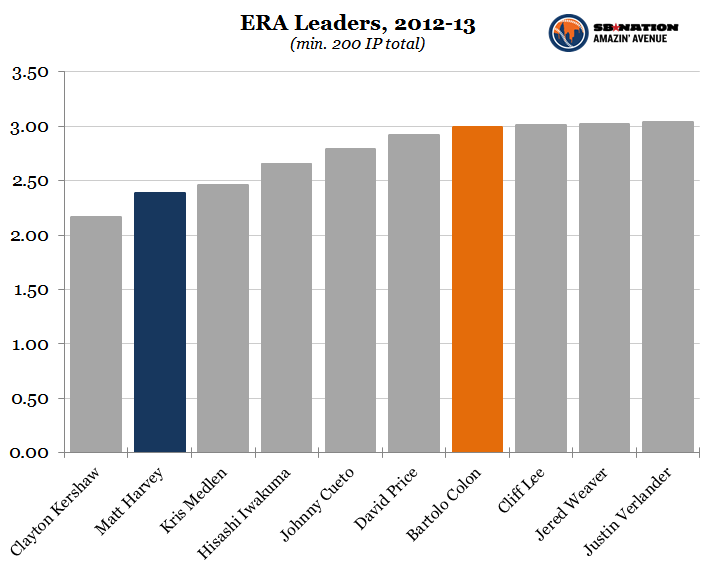 Colon’s home and away splits are actually closer than many might suspect. In 2013, while his home run and walk numbers regressed on the road, his strikeout numbers actually improved. The same strikeout and walk patterns occurred in 2012, except his home run numbers were actually better on the road.

The change in home ballparks might appear to signal heavy regression, but the difference between O.co Coliseum and Citi Field isn’t that large. While Oakland gave up far fewer home runs in 2013, Citi Field actually gave up slightly fewer runs, according to FanGraphs park factors. Home runs could play a large role in any potential problems for an older, control pitcher —who relies on a 90 MPH fastball 85 percent of the time— but switching leagues will also temper some of that regression.

The projections on Colon are fairly promising for a pitcher who will be 41 on Opening Day. ZiPS projects Colon for 1.9 WAR over only 147.7 innings, Steamer projects him for 2.3 WAR over 192 innings, and Oliver projects him for 1.7 WAR over 175 innings. Those numbers won’t exactly blow anyone away, but it’s a good sign that if he stays healthy, and continues to play his game, Bartolo can produce another 2+ win season while giving the Mets a nice return on their investment. Remember, we’re not selling jeans here, and Colon has shown that he can still get big league hitters out.