The Mets' bullpen took the game into extras only to watch it slip away when Jeurys Familia hit Hank Conger.

Share All sharing options for: Mets vs. Angels Recap: Gee with another middle-inning meltdown, Familia allows winning run on HBP

The Mets' bullpen had something to be proud of recently after a much-maligned beginning to the season. Coming into the final inning of tonight's game, Mets relievers had strung together 20 innings of shutout baseball. Jeurys Familia would add one more out to that streak in the bottom of the eleventh before hitting Hank Conger with the bases loaded to force in the winning run for the Angels and leave the Mets the losers in a 5-4 defeat.

In some ways it was an appropriate ending for a game that saw the Mets' relief corps bend often but never break. The team's relievers racked up six free passes—four unintentional—in its four and two-third innings of work, and that was on top of Gee's four. But the bullpen should be credited for holding the line into the eleventh despite its occasional shakiness, particularly Carlos Torres, who sparkled in one-and-one-third innings of work. Torres issued a free pass and allowed a hit, but he struck out three in relief of Mets starter Dillon Gee, who worked into the sixth before fading.

It's that sixth inning—Gee's third middle-inning meltdown in as many starts on the season—that will haunt the right-hander as he awaits his next start.

The Mets got the scoring underway early, as they put a quick run on the board in the top of the first inning when back-to-back singles by Eric Young and Daniel Murphy led to a run on David Wright's groundout into a double play. In the bottom of the frame, Gee gave the run back when he made his pitch down and in but watched Mike Trout muscle a home run to left-center anyway. The Angels took a 2-1 lead in the bottom of the second on a Chris Iannetta single that plated Howie Kendrick, who had hit a double off the top of the wall earlier in the inning.

The Mets stormed back, however, with Travis d'Arnaud clubbing a solo shot in the third (his first home run in 109 at-bats) and Josh Satin doubling in the fourth to score Andrew Brown and Curtis Granderson and extend the Mets' lead to 4–2. With left-hander Tyler Skaggs on the bump for the Angels, the two lefties at the center of the Mets' first base conundrum sat in favor of the right-handed Satin, who also commended himself in the field with a fine play on a rambunctious roller that hit the first base bag before popping high into the air with two outs and the bases loaded in the bottom of the fifth.

Gee came out for the bottom of the sixth determined to avoid the problems he's had so far as his pitch counts approach 90, and he must have thought he might actually do so when he struck out David Freese for the first out of the frame. But then he walked Howie Kendrick, participated in a quick conference with pitching coach Dan Warthen, and then toed the rubber to attack the recently-recalled J.B. Shuck. It was only yesterday that Gee had mentioned his intention to avoid the middle-inning problems that had plagued him in his first two starts of the season. Unfortunately, his third start would see the trend continue. On a 1–0 count, the light-hitting Shuck deposited Gee's 89 mph fastball into the right field stands to make it a 4–4 game. The two-run homer was only the third in 521 career at-bats for Shuck.

Gee remained in the game to retire Iannetta, but when Erick Aybar reached on a single to center, his night was over. Torres stepped in as the first of five relievers to hold the Angels in check, giving way to Gonzalez Germen in the bottom of the eighth. Scott Rice followed Germen, and Kyle Farnsworth followed Rice. When Jeurys Familia took over in the bottom of the ninth, the Mets bullpen had put together a string of 18 straight innings of scoreless relief. Familia would add another two and one-third innings of scoreless work before giving up the game.

Having never pitched more than two innings in a big league game before tonight, Familia came out in the bottom of the eleventh with the game still tied 4–4. Raul Ibanez, leading off the inning, lined a shot over the shift and a leaping Daniel Murphy. Freese stepped into the batter's box with Ibanez on first, only to watch a slider from Familia bounce to the backstop. Wild pitch, Familia. Ibanez to second. When Freese hit a ground ball to Ruben Tejada for the first out of the inning, Ibanez reacted immediately with a great read and made it to third. Intentional walks to Kendrick and Shuck loaded the bases to set up the double play, and brought Conger to the plate. On a 2–2 count, Familia lost control of a 98 mph fastball and hit Conger in the back. Ibanez scored and the Mets lost 5–4. 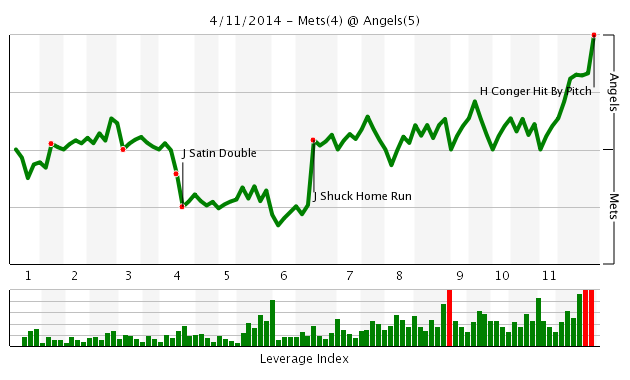