Mets vs. Angels Recap: Anthony Recker does it all, except for pitch the ninth so we could have maybe gone to bed by midnight

The Mets got big hits from Omar Quintanilla and Anthony Recker, and fine pitching performances from Gonzalez Germen and John Lannan.

Share All sharing options for: Mets vs. Angels Recap: Anthony Recker does it all, except for pitch the ninth so we could have maybe gone to bed by midnight

The Mets bounced back from a horrible lost on Friday night (granted, narrowly avoiding another horrible loss on Saturday night) to even their series with the Los Angeles Angels of Anaheim.

The Angels drew first blood on an RBI single in the first off the bat of Albert Pujols, but the Mets quickly struck back in the second with a solo home run from designated first baseman(?) Lucas Duda, his third of the season. Despite some control issues from Los Angeles starter Jered Weaver, the Mets couldn't manage much more, garnering just that one hit until the seventh inning. Meanwhile, the Angels crept back into the lead via solo home runs from Chris Iannetta in the fifth and ex-Met Collin Cowgill in the sixth. 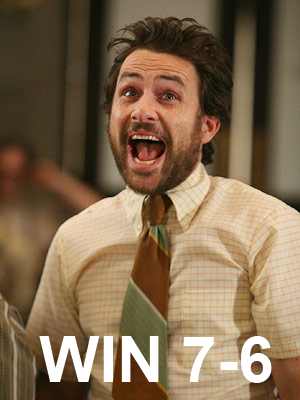 The Mets would strike back in the top of the seventh. Curtis Granderson drew a one-out walk, and two batters later Duda dunked a single into left to send him to third. Lagares continued the two-out rally with an RBI single, chasing Weaver from the game. Fernando Salas came on to face Anthony Recker, and the backup catcher shot a single just out of the reach of Mike Trout in center. Recker was held to a single, but Lagares scored all the way from first as the go-ahead run.

Jon Niese pitched a scoreless seventh and got Kole Calhoun in the eighth before giving way to Carlos Torres (again). Torres walked JB Shuck, but somehow got Trout to ground into a double play to snuff the rally before it could start.

The Mets would add to their lead in the top of the ninth. A pair of walks to Ike Davis and Anthony Recker, sandwiched around a Juan Lagares single brought Omar Quintanilla up with the bases loaded and one out. The Mets had yet to use any of their bench, so some yahoo on #MetsTwitter had a bright idea.

This would be a good spot to pinch hit with...anyone.

Of course, Quintanilla fired the first pitch into the outfield for a two-run single, his first hit of the year, extending the Mets lead to 6-3. The Mets reloaded the bases after Eric Young, jr was hit by a pitch, but Daniel Murphy struck out and David Wright flew out to right.

That brought us to the ninth with a comfortable three-run lead and proven closer Jose Valverde on the mound. He got two quick outs. Then, David Freese squirted one through the middle and Erick Aybar worked a walk. That brought 41-year-old Raul Ibanez to the plate. Raul Ibanez is still in the league because he can still do, well, things like this to fastballs from right-handed pitchers.

Hey now that you mention it, that pitcher looks familiar...

Ibanez's 2000th career hit was a no doubt, three-run, game-tying bomb. That's a lot of bad adjectives right there.

So to extras we went again. Both teams went quietly in the tenth...and the eleventh...

Murphy and Wright made two quick outs in the twelfth, but Freese couldn't make the play on a slow roller off the bat of Granderson, and both Davis and Duda worked walks, bringing up Juan Lagares, hero from much, much earlier in the evening. Lagares fell behind 0-2, battled back to even the count, but flailed at a pitch in the dirt to send us to the bottom of the twelfth.

In the bottom half, John Lannan emerged from the back of a milk carton and into a baseball game. Lannan would have an easy time of it, sending the game to inning number 13. It would be a lucky number for the Mets, who finally regained the lead with a solo blast off the bat of Anthony Recker. That is all Lannan, back out to preserve his win, would need. He retired the Angels 1-2-3 in the bottom of the thirteenth to force a rubber game tomorrow afternoon. Well, I suppose this afternoon technically speaking. 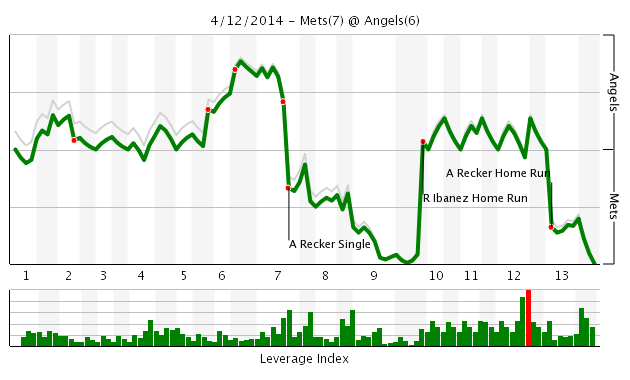 No game notes, I am going to bed.