Mets vs. Angels Recap: A thorough shellacking in Anaheim

Bartolo Colon gave up four home runs and nine runs as the Mets were defeated 14-2.

Share All sharing options for: Mets vs. Angels Recap: A thorough shellacking in Anaheim

Coming into their series finale with the Angels this afternoon, the Mets had the opportunity to win their third straight series. Unfortunately, that accomplishment was mostly out the window by the time the first inning came to an end. 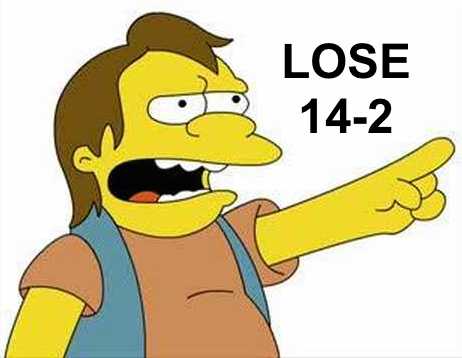 For a couple of minutes, at least, the Mets were ahead of the Angels. Eric Young Jr. singled to begin the game, moved to second on a Daniel Murphy ground out, and scored on a David Wright single. That was it for the Mets in the first, though, as Josh Satin struck out and Wright was caught stealing on the same pitch.

Bartolo Colon took the mound in the bottom of the first for his worst start since coming back to the big leagues in 2011. After a harmless ground out off the bat of J.B. Shuck to start the frame, Colon surrendered back-to-back-to-back home runs to Mike Trout, Albert Pujols, and Raul Ibanez. Kole Calhoun followed up that barrage with a double, Colon struck out Howie Kendrick, and Ian Stewart doubled to plate Calhoun. Colon struck out Hank Conger to get out of the inning, but the Mets were down 4-1.

It didn’t get any better from there. C.J. Wilson kept the Mets off the board through the fourth inning, and though Colon put up a couple of goose eggs in the second and third, he struggled again in the bottom of the fourth.

The Mets eked out a run in the top of the fifth, but Colon went back out and gave up two more runs in the bottom of the inning on a Hank Conger home run. He finished the inning, but Colon finished the day with four home runs allowed, three strikeouts, and two walks—his first and second of the season—to go with the nine runs he allowed.

The Mets wouldn’t score again in the game, but the Angels piled on a bit. Scott Rice gave up two runs in the bottom of the sixth and has generally struggled in the early going this year.

In the top of the seventh, David Wright and Daniel Murphy were ejected for arguing balls and strikes with a home plate umpire who had irritated the Mets all afternoon. Given the score at the time, it’s understandable that both players were heated.

Jeurys Familia threw a scoreless seventh inning, the relative highlight of the game since so few of his teammates did anything good in the game, but John Lannan gave up three runs in the eighth inning. The first scored in a wild pitch, while the second and third scored on a home run, the Angels’ fifth of the game.

It was one of those games that you try to forget as soon as it’s over—and maybe even a bit earlier than that. The great thing about baseball is that there’s almost always another game tomorrow, as there is in this case. A 14-2 loss will make for an ugly run differential for the Mets for a while, but it’s still just one loss in the standings. And the Mets open a three-game series against the Arizona Grissionbacks at 9:40 pm EDT on Monday night. 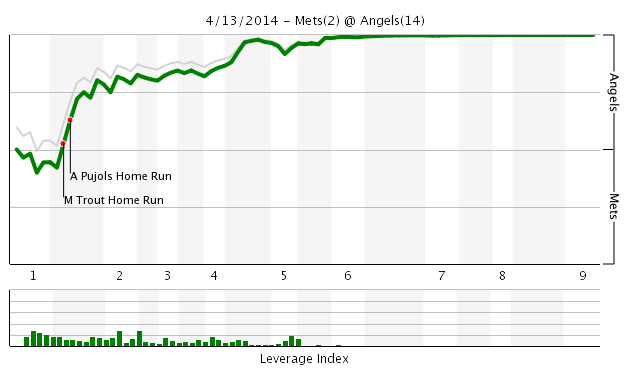