It was a bit of a bittersweet win for the Metsies.

The Mets rebounded nicely from a blowout loss in Anaheim on Sunday with a 7-3 win over the hapless Arizona Diamondbacks on Monday night. The win didn’t come without cost, however, as Juan Lagares left the game early with a hamstring injury, and Curtis Granderson left early after contusing his arm, ribs, and knee while attempting to make a catch in the first inning.

Arizona scored the first run of the game as Granderson slammed into the wall. Paul Goldschmidt had singled against Zack Wheeler with two outs in the inning, and he came into score as Miguel Montero doubled to Granderson, who very nearly completed the catch on the hard line drive before slamming into a pole in the right field fence and dropping it.

But the Mets answered in the second inning with a run. Lucas Duda led off with a single, the first of his four hits on the evening. Juan Lagares doubled, giving the Mets runners on second and third with nobody out. They scored just once, on Ruben Tejada’s one-out ground out, but the game was tied.

The Mets took the lead in the third inning. Eric Young Jr. hit an infield single to start the inning and advanced to second base when Arizona shortstop Chris Owings threw the ball into the dugout. Daniel Murphy followed with a double to deep center field, though Young inexplicably did not score on the play as he went back to second base to tag up rather than wait halfway between second and third. Young scored anyways on a ground out by David Wright, and one Granderson strikeout later, Murphy scored on a Lucas Duda single.

Wheeler almost lost control of the game in bottom of the third. After recording an out, he issued a walk, gave up a single, and issued another walk to load the bases. Martin Prado then flew out to left field, scoring Gerardo Parra from third base, but David Wright made a wise move and cut off Eric Young’s throw from left field to peg Aaron Hill as he tried to get to third base on the play. That ended the inning and could very well have been the turning point of the game.

Neither team scored in the fourth, but the Mets added a couple of runs in the fifth, one scoring on a Curtis Granderson single to the left side as Arizona had its infield in a shift to the right side, and the other on Lucas Duda’s subsequent single.

With Lagares and Granderson out, Lucas Duda was forced into the outfield in the bottom of the seventh inning, with Young in center, and Andrew brown in right. Wheeler pitched into the inning but was pulled with one out and runners on first and second. He struck out three, walked three, and gave up six hits in the outing. Of his 97 pitches, 57 were strikes.

Carlos Torres came in to take Wheeler’s place and got out of the inning unscathed. He finished the game, too, allowing a run in the eighth but nothing in the ninth. He’s been a very big part of this road trip for the Mets.

Although it turned out not to be necessary, the Mets notched a couple of insurance runs in the eighth, one apiece on a Daniel Murphy sacrifice fly and a David Wright single to the opposite field. 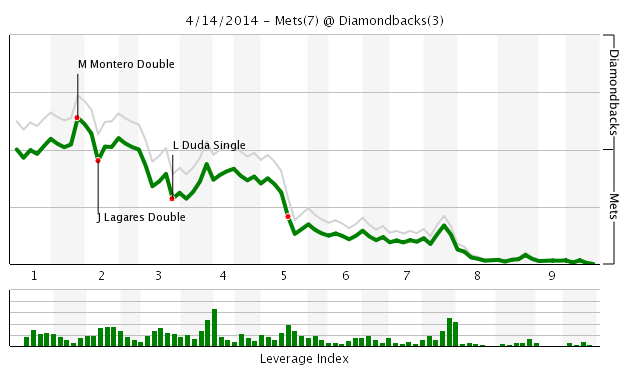