Mets vs Cardinals Recap: Mejia and bullpen combine to shut out Redbirds 2-0

Pitching and defense propelled the Mets to victory tonight. Jenrry Mejia and three relievers combined to shut out the Cardinals, and Ruben Tejada made two great plays in the field.

Share All sharing options for: Mets vs Cardinals Recap: Mejia and bullpen combine to shut out Redbirds 2-0

The Mets didn't hit much tonight but they made up for it with strong pitching and defense. Pitching, courtesy of a dominant Jenrry Mejia and three relievers. Defense, courtesy of an error-free performance by the Mets and two fantastic diving plays by Ruben Tejada. The result was a 2-0 victory, bumping the Mets' record to 10-9. Pretty darn good, considering some of the frightful individual Met performances over the first eighth of the season.

Mejia was the star of the night. He enjoyed his best start of the young season, tossing 6.2 scoreless innings while striking out seven, walking three, and allowing four hits (all singles). Among the strikeout victims were good major league hitters Matt Carpenter, Matt Holliday, Matt Adams, and Allen Craig. That makes 24 strikeouts this season in 22.2 innings, a fantastic rate that would look even better if he could cut down on the walks. 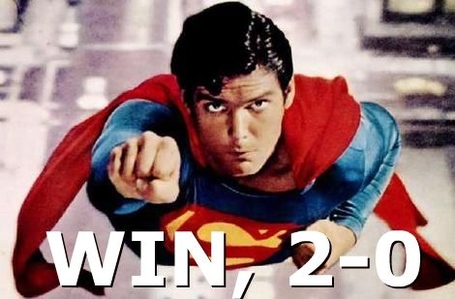 Mejia was terrific but things might have gone differently if not for a slick double play started by Tejada. In the fifth inning, with the Mets up 1-0 after a David Wright RBI single in the third inning, Jon Jay came up with no outs and runner on first. Jay grounded one up the middle that looked headed for center field until Tejada dove and snagged it. The struggling shortstop flipped to Daniel Murphy at second base for the lead out, and Murph threw to first to complete the double play. Tejada had previously robbed Yadier Molina in the fourth inning on a similar play. Perhaps Tejada can go all Rey Ordonez on us this season? No bat, Gold Glove? Doubtful, but he was great tonight.

It looked like Mejia had a shot at going the distance when he retired the first two batters in the seventh inning and his pitch count sat at just 81. However, he walked Jay and Mark Ellis, and Terry Collins called for Scott Rice. The lone lefty in the Mets' pen did his job, getting Shane Robinson to ground out and striking out Carpenter to start the eighth inning. Carlos Torres followed and allowed a double to Craig before striking out Holliday and Adams. That set the ninth-inning stage for the new Mets closer, 38-year-old Kyle Farnsworth. He allowed a leadoff single to Molina, but Mets fan agita was relieved when Jhonny Peralta grounded into a double play, nicely turned by Wright and Murphy. Jay then grounded out to end it and give the Mets a win that pushed their record over .500 to 10-9.

Some bullet notes about the game:

Unintentionally sexual quote of the game: "Warthen hoping Mejia could get some length." -- Gary Cohen (via Rob Castellano) 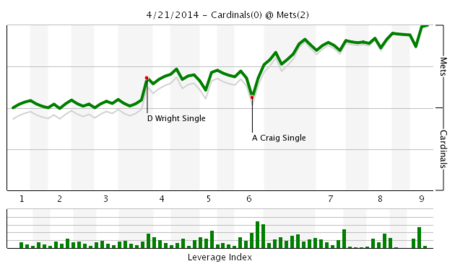