Seven dominant innings from Adam Wainwright? That I can see. A game-saving catch by Matt Holliday? Not so much.

Adam Wainwright's pretty good at pitching. Mets fans were taught this back in 2006 and have been reminded of it many times since. There is no shame in losing to one of the best pitchers in baseball.

When you lose a game in which a potential game-tying hit is is snared by a comically bad fielder, well...there's not quite shame in that, either. But there's something in it that rubs you the wrong way, dagnabbit. Call it Shame Lite. Less filling than regular shame but with the same awful taste. 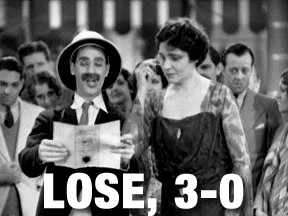 Wainwright and Dillon Gee matched zeroes over the first three frames, although Gee had to work harder for his goose eggs. Whereas the Cards' ace cruised, the Mets' starter flirted with danger all night. Gee only cracked once, but it was one crack too many.

About that danger: A two-out hit down the third base line to Matt Holliday in the top of the first was quickly negated when a timely throw from Eric Young (combined with some slow wheels on Holliday) helped gun down the runner before he could leg out a double. Gee saw Matt Adams beat out an infield single to start the second, but fanned the next batter, Yadier Molina, while Adams was nailed trying to steal second. Jon Jay then reached base on an Omar Quintanilla error, but a flyout from Jhonny Peralta ended the inning. In the third, Gee watched Matt Carpenter almost take his head off with a two-out single up the middle, but recovered nicely to strike out Allen Craig looking.

While Gee danced with the devil in the pale moonlight, Wainwright barely broke a sweat, facing the minimum through the first three innings. The only Met to reach base against him over that stretch was Chris Young in the bottom of the second (who wisely decided to send his hit near Matt Holliday), and he was erased when the Cards returned the strike-em-out-throw-em-out favor with Lucas Duda at the plate.

The drizzle that had persisted all game briefly hardened into a rain in the top of the fourth, which is also when a cloud descended on Dillon Gee. He walked Holliday to start the inning, then allowed consecutive singles to Adams and Molina. Another single up the middle by Jay drove in the first two Cardinals runs, and a tardy relay throw failed to cut down Molina as he strayed too far off of second.

Gee then walked Peralta to reload the bases, and it appeared that a huge inning was just one swing away, but a fielder's choice from Kolten Wong resulted in a force out at the plate, as did another grounder from Wainwright. The pitcher's hit might have resulted in a double play, but for a takeout slide at home from Jay that prevented Travis d'Arnaud from throwing to first. Tasked with getting the third out some other way, Gee struck out Matt Carpenter to strand three runners.

Gee did well to limit the damage to two runs in the fourth, but Adam Wainwright can do a lot with two runs. After Gee retired the Cards in order for the first time in top of the fifth, Daniel Murphy bunted his way on to start the bottom half, making him the first Mets baserunner since the second. Chris Young made a bid to tie the game with a long fly to deep left field, but in a clear act of revenge for my gratuitous crack about his defense, Holliday made a great leaping catch at the left field fence to rob him of a home run. If you put a couple bucks on a prop bet for "Holliday play saves game," congratulations, you are now a millionaire.

Chris Young's not-quite homer is the closest the Mets would come to making an offensive dent in this game. Right after his near miss, Duda singled to put two whole Mets on base at once, if you can believe it, but Wainwright induced an inning-ending double play from d'Arnaud to extinguish this brief flicker of a threat.

Gee's night concluded with a 1-2-3 top of the sixth. His outing certainly could have gone worse, considering how the fourth inning unfolded, but it had gone bad enough to doom the Mets. In the bottom of the sixth, Eric Young hit a two-out single, but Curtis Granderson swung at the first pitch he saw and grounded out to first, ending the inning with a chorus of loud boos. Grandy is now 0 for his last 22, the longest hitless stretch of his career. I'm pretty sure it's also the longest hitless streak of any career ever in the history of spacetime.

The first man out of the Mets' bullpen, Gonzalez Germen, contributed a scoreless top of the seventh, while Wainwright retired the Mets in order yet again in the bottom half. That inning concluded with an awkward play, during which Wainwright lunged for a broken bat looper by Christ Young. Matt Carpenter fielded the ball and tagged out Young for the third out, but the Cardinals' ace lurched off the field looking a bit worse for wear. After retreating to the dugout, he received The Dreaded Handshake, indicating his evening was over. Later, the official word was that Wainwright suffered a hyperextended knee. The fact that he remained on the bench, rather than head for the trainer's table, indicated his removal was probably more cautionary than necessary.

That might be cold comfort for Cardinals fans, but Wainwright's exit from the game (by whatever means) was probably the Mets' only hope to prevail in this game. They could not capitalize in their first shot at the Cards' bullpen, however, as righty Brad Ziegler retired the Mets on three fly balls in the bottom of the eighth.

Germen returned for the eighth and landed himself into bases loaded trouble with a leadoff single by Holliday, a two-out single from Jay, and a walk to Peralta, but bailed himself out with a grounder from Wong. Recently deposed closer Jose Valverde was not nearly as skilled at risk management, as he walked pinch hitter Daniel Descalco on four pitches, then allowed him to steal second. Valverde struck out the next two batters, but permitted Holliday to knock in Descalco with a single. One might term this an insurance run, though considering the Mets' offense, scoring insurance runs against them is as pointless as purchasing flood coverage when you live in Death Valley.

Trevor Rosenthal took the mound to earn the save for St. Louis in the bottom of the ninth, and though he retired Bobby Abreu (pinch hitting in his Mets debut) on a flyout, he walked Eric Young and Granderson in succession, with many of his pitches nowhere near the zone. That brought David Wright to the plate as the tying run, and brought a conference to the mound to straighten out a seemingly spooked Rosenthal.

It appeared that a meltdown might be in the offing, but whatever was said to Rosenthal did the trick. The Cards' closer caught Wright looking at a called strike three (Wright disputed the call, though it did seem to catch the plate) and got Murphy to bounce out to short to end the ballgame.

Not much to do after a game like this but tip your cap to Mr. Wainwright, and shake your fist at Mr. Holliday. Or perhaps, in the spirit of the Mets' own injured ace, you can greet Holliday not with a fist, but with just one digit. 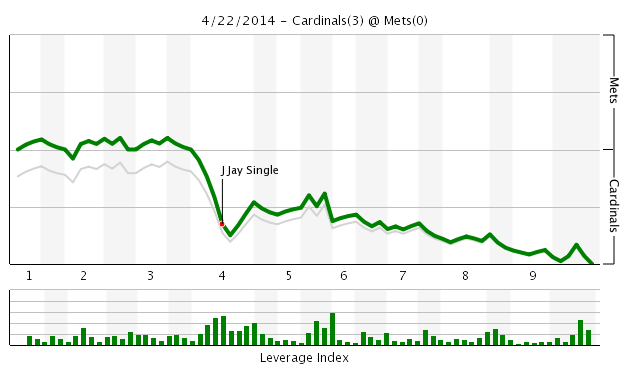