Ryan Zimmerman gets four hits, Zack Wheeler gets a quality start, and the Mets only strike out eight times!

The first two Mets games of the season followed the same sad formula. First the Mets gave their fans hope by jumping out to an early lead. Then, New York's starting pitcher flirted with a quality start, making it seem like the team could win if they scored just one or two runs against the opposing bullpen. Finally, the bullpen collapsed, wiping out all hope of a victory. Unfortunately, the formula repeated itself once more on Thursday afternoon, dooming the Mets to an 8-2 loss to the Nationals. 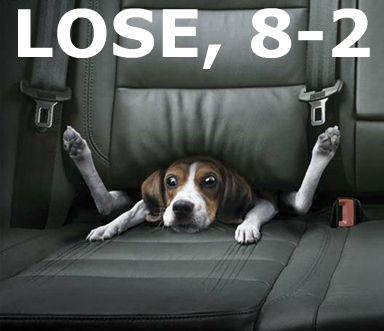 The game got off to a good start for the Mets, as all three have this season. Zack Wheeler walked Denard Span to start the game, but he got out of the inning by hurling two of his six strikeouts. In the bottom of the frame, the Mets rallied for a pair of runs. Daniel Murphy got it started with a one-out single (his first hit of the season), and David Wright got lucky when Span lost a routine fly ball in the sun.

That set the table for Curtis Granderson, who notched his first hit of the season on a line drive down the right field line off of Nationals starter Tanner Roark. The double allowed Murphy to score, and Juan Lagares got Wright home two batters later with a sacrifice fly. Once again, the Mets were off to a hot start in Flushing.

Wheeler allowed Ryan Zimmerman to hit a home run to lead off the second inning, but would settle down over the next two frames. He pitched around a Murphy error in the third by striking out two more batters to give himself six for the day. In the fourth, a Zimmerman single was erased when Ian Desmond grounded into a double play. However, as Wheeler continued a disturbing trend of allowing the leadoff hitter to reach base in every inning he pitched, he was eventually going to get bitten.

That happened in the fifth, when he walked backup catcher Sandy Leon to start the inning. Roark bunted the man over, allowing Span to tie the game at 2-2 with a single to right field. Washington's center fielder advanced to second base on the throw to the plate, and that paid dividends when Jayson Werth laced a single to right field two batters later. Span scored on the play to give the Nationals a 3-2 lead.

That wouldn't be too much of a problem if the Mets' offense had not gone into hibernation, or if their bullpen was capable of doing anything correctly. Of course, both the bullpen and the lineup turned a 3-2 deficit into a very big problem.

After the first inning, Roark settled down, lasting six innings with five strikeouts and three walks. Ruben Tejada reached on a single to start the second inning, but he was stranded after a successful Wheeler bunt. The Mets went down in order in the third, but in the fourth, Lagares continued his hot start with a bloop double down the right field line. New York once again failed to get the leadoff hitter home, and that would be the last time the team would bat with the lead.

With two outs in the fifth, Granderson put himself into scoring position with his second double of the game, but Lucas Duda struck out to end the threat quickly. The sixth saw Roark end his outing with authority by striking out the side.

The game got ugly starting in the seventh when the Mets' bullpen took over. Scott Rice started the party by allowing base hits to pinch hitter Scott Hairston as well as Bryce Harper. With one out, Jeurys Familia came into the game and promptly walked Jayson Werth on four pitches to load the bases. Adam LaRoche followed with a hard ground ball to first that bounced off of Duda's glove and into right field. Two runs came home, and the Mets were in trouble.

The inning wasn't over, though. Zimmerman ripped his fourth hit of the game into right field for an RBI single and the sixth Washington run. Next, Desmond grounded to third for a force out at second base, but when Murphy threw to first to try and get a second out on the play, the ball skipped past Duda and into the dugout. That plated LaRoche to make it a 7-2 game.

That was pretty much it for the Mets. Ross Detwiler and Rafael Soriano had little trouble pitching the final three innings for Washington. Meanwhile, Carlos Torres walked in a run in the eighth before Gonzalez Germen pitched a mercifully perfect ninth.

The Mets only struck out eight times today. Hooray. Next up are the Cincinnati Reds. The three-game series begins on Friday night with Mike Leake scheduled to take the mound against Jenrry Mejia. 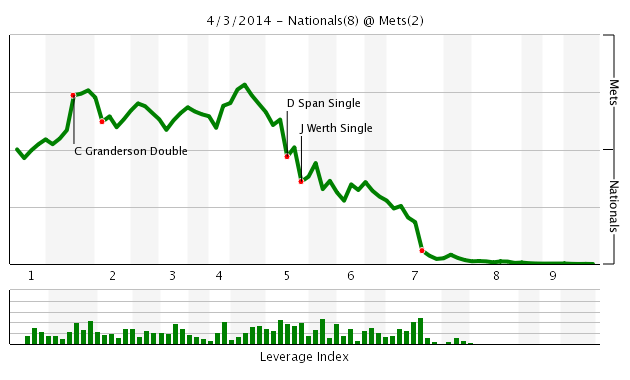