What kind of season will Zack Wheeler have? Read a season preview and provide your own projection.

After Zack Wheeler enjoyed a strong, but not dominant, season in 2013, perhaps media outlets will show some respect to the young man and spell his first name correctly (some incorrect Zack-with-an-"h" instances from last year): 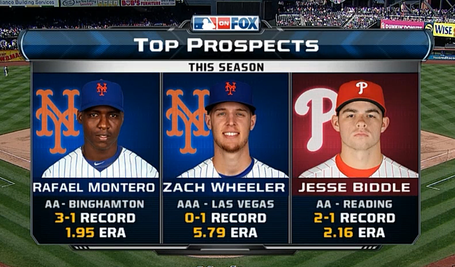 Wheeler almost seems like the forgotten top young Mets pitcher, what with Matt Harvey and Noah Syndergaard around. Wheeler is the Bill Pulsipher to Harvey and Syndergaard's Jason Isringhausen and Paul Wilson (although Wheeler has more promise than Pulsipher did). With Harvey on the shelf and Syndergaard at Triple-A Vegas, Wheeler should get plenty of attention. How will he progress in his sophomore season? Can he improve his control, and lower the 10.7% walk rate he posted in 2013?

I'm mildly bullish on Wheeler for 2014, but I don't see him making the leap to ace just yet. It seems like he'll need a few years to get there, if he does (I think he will). Post your Wheeler projection in the comments in the same format as below. I'll compare our projections to actual results at season's end.