When I was a kid, my mom—a huge Mets fan—couldn't deal well with losing streaks. One or two games didn't bug her, but once a slide hit three games, she developed a curious myopia that caused her see any losing streak as infinite. They're never gonna win again, Matt! she'd say, only half kidding, and I would have to tell her that from a pure probability standpoint, the Mets were all but guaranteed to win another game at some point.

If you watched the Mets' first three games of 2014, all ugly losses, you too may have suffered from the same affliction as my mom. But I can now assure you that the Mets will not go winless this season, thanks in large part to Jenrry Mejia, Lucas Duda, and, believe it or not, at least some members of the Mets bullpen 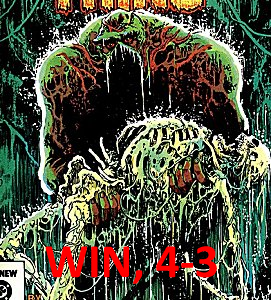 Playing the role of stopper in his first start of the young season, Mejia threw a scoreless first inning, thanks to two strikeouts of his own and a homer-saving catch at the left field fence from Eric Young. Despite allowing a single and a walk with two out in the second, Mejia added three more Ks in the frame.

The strikeout was Mejia's best friend and worst enemy all night. It helped him escape danger more than once, but his pursuit of the K led to long at bats and elevated pitch counts that meant he would not go deep into the game. (The Arctic temperatures and continual mist didn't help much, either.)

The only real mark against Mejia came in the top of the third, when Mejia allowed a one-out walk to Roger Bernadina, then was victimized on a ball off the bat of Brandon Phillips that ricocheted off his angle. (He recovered in time to grab the ball and get the force at first.) Mejia insisted on staying in the game but looked a bit worse for wear as he issued a free pass to Joey Votto, then saw Jay Bruce single up the middle to plate the game's first run.

The Reds were patient with Mejia, but the Mets showed little inclination to respond in kind. To be fair, the home team took a fair amount of pitches against Cincinnati starter Mike Leake in the bottom of the first, loading the bases on a one-out single by family leave activist Daniel Murphy and a pair of two-out walks. Unfortunately, Juan Lagares flew out to deep right field to end the threat. After this wait-and-see approach bore no fruit, the Mets' batters reverted to form and swung early and often, surrendering quietly in the second and third.

After Murphy's first inning single, the Mets wouldn't collect another hit until the bottom of the fourth, Curtis Granderson beat the shift with a double down the third base line. The next batter was the newly christened everyday first baseman Lucas Duda, and he drove Leake's very next pitch deep into the bullpen, giving the Mets a 2-1 lead.

Given this advantage, Mejia spent the rest of his evening dancing in and out of trouble, not always of his own doing. He issued another walk in the top of the fourth but nothing else, finishing off the inning with another strikeout. A leadoff walk of Bernadina in the fifth was erased when Phillips grounded into a double play. A single by Votto in the same frame proved harmless when Mejia caught Bruce looking on a nasty cutter.

With his pitch count nearing 100 in the sixth, Mejia landed in hot water yet again when a leadoff single by Ryan Ludwick snuck past David Wright. The pitcher induced a grounder from Todd Frazier that looked like a sure GIDP, but Murphy bobbled the ball, turning two outs into none. After a flyout, another grounder to first was nearly converted into another double play, but Ramon Santiago narrowly beat the relay throw. Despite being called on to get six or so outs in the inning, Mejia capped his evening in style and stranded both runners by fanning Leake, his eighth and final K of the night.

After a quiet fifth for the Mets, David Wright started the sixth with by legging out an infield single. Curtis Granderson narrowly missed a homer when Bruce ran down his long fly ball. Duda did not miss, belting his second two-run shot of the day into the Modell's Something-or-other in right field, extending the Mets' lead to 4-1.

By this point, however, Mejia had already hit the showers, leaving nine important outs in the shaky hands of the Mets bullpen. I realize we're only four games into the 2014 season, but watching them work already feels like viewing the baseball equivalent of The Wages of Fear. The first damned soul summoned in the top of the seventh was John Lannan, who gave up a one-out single to Phillips and a long two-out home run to Bruce that shaved the Mets' lead to one slim run. And a chorus of Here we go agains could be heard echoing throughout the borough of Queens.

Considering the bullpen's deficiencies, it would have behooved the Mets to tack on to their lead, but they were not up to that task. Leake stuck it out until two outs in the bottom of the seventh, when he issued a walk to Eric Young. Lefty Manny Parra took his place and ceded a single to Murphy. For some reason, the Reds stuck with the southpaw against lefty-killer David Wright, and Wright made them look like geniuses by popping out to snuff out the rally. Parra and J.J. Hoover combined to keep the Mets off the basepaths in the bottom of the eighth.

Fortunately, upon Lannan's exit from the game, the Mets' bullpen proved itself not horrible for an entire 2 1/3 innings. That's not to call it good, even for such a limited amount of time; merely to say that it ceased being a complete dumpster fire for one brief, shining moment.

Rowdy Kyle Farnsworth secured the last out in the top of the seventh and the first in the eighth, then allowed Brayan Pena to single his way on. (The suddenly pesky catcher had already walked twice in the game.) With the tying run on base, the Reds decided to burn their Secret Weapon, inserting Billy Hamilton as a pinch runner. And indeed the Reds were burned, as Hamilton was thrown out trying to steal second by Anthony Recker by a healthy margin. With Hamilton extinguished, Farnsworth induced a foul out from Santiago to end the inning.

As the Mets hung onto a one-run lead going into the top of the ninth, Jose Valverde was given his first save opportunity since Bobby Parnell's elbow injury implicitly made him the Mets' closer. He retired the first batter on a grounder, but in a sight that would seem chillingly familiar to Tigers fans, he followed this with a one-out walk of Roger Bernadina and a single from Met-killer Phillips. That not only put the tying run in scoring position and the go-ahead run on first, but also brought up the dangerous heart of the Reds' order.

And yet, Joey Votto did the Mets a favor by swinging at Valverde's first pitch, a low sinker lofted harmlessly into left for out number two. Valverde came right after Jay Bruce and struck him out on a Valverdian high hard one to end the game, thus securing the Mets' first actual win in the year 2014.

Now if you'll excuse me, I gotta go call my mom. 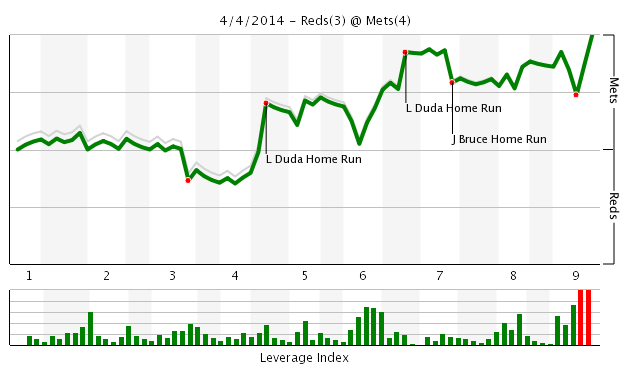