Is it time to worry about Travis d'Arnaud?

People seem to be getting anxious about the Mets' rookie backstop—but should they be?

Share All sharing options for: Is it time to worry about Travis d'Arnaud?

Not surprisingly, there's been more than a little ink spilled on behalf of the Mets' rookie backstop, Travis d’Arnaud. Specifically, the natives are getting a bit restless over the poor start to his 2014 campaign.

This is only natural. For one, the guy doesn’t even have a hit yet this year. Few people get a warm, fuzzy feeling when looking up and seeing ‘.000’ on the Diamond Vision.

Additionally, whereas a slow start from someone like Curtis Granderson—who is batting a lowly .167 at the moment—doesn’t generate much panic based on the success he’s had in the past, d’Arnaud doesn’t have that built-in equity just yet. That means he has to fight against the current of a fan base that instinctively envisions the next big prospect flop in the offing.

Further complicating matters is the poor debut d’Arnaud had in 2013, when he batted .202/.286/.263. While this was a relatively small, 99 at-bat sample, it certainly seems to resonate more now that he’s again struggling.

For all of these reasons it’s natural to be concerned about this early-season hiccup. But it’s also important not to go overboard.

There’s an increasingly popular idea that the young catcher is ‘lost’ or ‘clueless’ at the plate. To quote the de facto mouthpiece of the online component of the Mets fan base, Matt Cerrone (emphasis mine):

"(d’Arnaud)’s showing no signs of a young hitter with an idea of what he’s trying to do at the plate. His approach is very defensive. He’s reacting, he’s not in command, and that’s never good, especially for a 25-year-old making in his rookie season."

Now obviously it’s hard to quantify whether someone ‘has an idea’ during a plate appearance. To me, however, a player is doing a decent job if he’s able to get ahead in the count—and d’Arnaud has done that. In fact, so far he has been ahead at some point in 14 of his 17 total plate appearances in 2014: 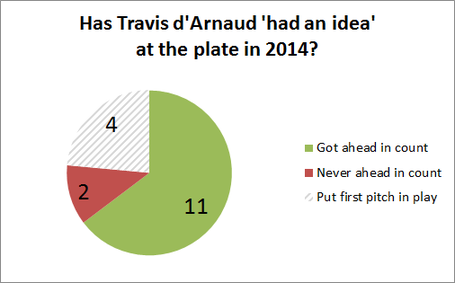 This is no guarantee of future success—especially not at this sample size—but it seems unfair to say that the kid is totally lost out there if he's been able to get ahead in over 80% of his plate appearances.

In fact, d'Arnaud is currently sporting an 11.1% line-drive rate. While that number is certainly not anywhere near the league leaders (Derek Dietrich leads the majors at 75%) he's pacing a number of players who have had much better results:

Line drive rate is not the end-all, be-all statistic when it comes to offensive potency. However, it does correlate pretty well with strong offensive performance. A good estimate is that a line drive becomes an out about one-quarter of the time while ground balls and fly balls become outs much closer to three-quarters of the time. By that measure alone one would expect d'Arnaud to have a better fate at this point.

Now is all of this highly predictive of future success? Not especially. The line drive rate is suggestive of better underlying performance than what he's doing now, but don't misunderstand my point here: Who knows how productive Travis d'Arnaud will end up being in 2014 or beyond? There's definitely a non-zero shot that he busts.

But now is not the time to begin touting that bust. Granted, he’s not getting hits; but as we can see the process is not broken – at least not completely. He’s still doing good things at the plate, despite the less-than-ideal results. When it comes to how much he'll hit in the future we may not have a great idea, but we can pretty clearly see that d'Arnaud himself certainly has an idea when he steps to the dish.