Mets vs. Braves Recap: Colon is the quicker picker upper

Atlanta's home opener ends poorly for the home team as Bartolo Colon and Ruben Tejada power the Mets to a 4-0 win at Turner Field.

Share All sharing options for: Mets vs. Braves Recap: Colon is the quicker picker upper

Atlanta's home opener coincided with the 40th anniversary of Hank Aaron's record-breaking 715th career home run. The occasion was marked with pregame ceremonies honoring Aaron and the almost unfathomable pressure and abuse he had to endure while chasing Babe Ruth's home run mark. During the game, the Mets and Braves honored Aaron by demonstrating that hitting a baseball remains an extremely difficult thing to do. There wasn't much offense to speak of tonight, but all of what passed for it went New York's way. 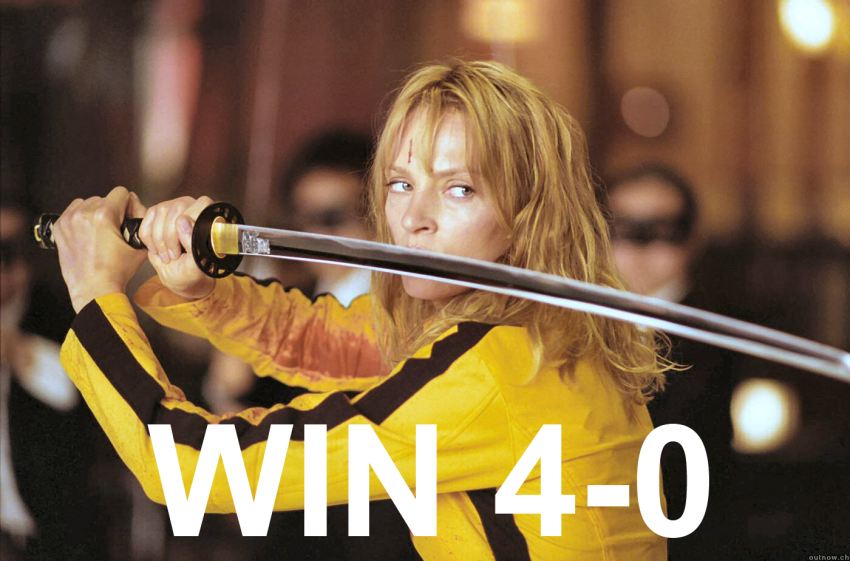 Eric Young singled and stole second to start tonight's proceedings, but the Mets were otherwise silent in the first two frames against Aaron Harang. New York wouldn't get another baserunner until Ruben Tejada and Young walked in the third (sandwiched around a Bartolo Colon bunt attempt that should have been set to ragtime music). A long fly by Daniel Murphy allowed Tejada to tag and move to third, while Young stole his second bag to advance to second. That put David Wright in prime position to give the Mets the early lead, but Harang beat him to the punch by bouncing a pitch that got far away enough from catcher Evan Gattis for Tejada to scamper home.

In 2014, this is called a "Mets rally." In this case, you should think of the modifier "Mets" as you would the modifier in a phrase like "Dutch treat."

Having taken a lead without a hit, the Mets decided they'd rather not risk reaching base again if they could help it. They did actually put another two men on base in the top of the fourth with a Curtis Granderson walk and a single by Travis d'Arnaud (finally ending the catcher's 0-for-2014), but could push neither across. The fifth was over in a flash, with both Colon, Young, and Murphy going down on strikes, and the sixth brought two more Ks of Wright and Juan Lagares.

Harang departed the game at this point, with nine strikeouts in just six innings against Mets batters, which should probably be judged as a percentage of striking out a "full" batter. Then again, striking out against Harang should probably count more for a batter, him being Aaron Harang and all. I think we'd need Stephen Hawking to figure out the math on this one.

I was going to say that Bartolo Colon was sharp in this game, but nothing about his shape suggests the word "sharp." It'd be more appropriate to say he was absorbent, allowing a few leaks here and there but quickly sopping up all of them. Basically, I'm calling Bartolo Colon a roll of Bounty paper towels. I'm sure he's been called worse.

Colon managed the feat of pitching his first three innings in almost identical fashion. He started off his evening with flourish by striking out Jason Heyward and B.J. Upton, who both went down to a chorus of boos. A two-out double to Freddie Freeman was followed by a harmless flyout from Chris Johnson to end the first. The second inning saw Colon retire the first two batters easily, give up a single to Evan Gattis, then get Andrelton Simmons to fly out. And in the third, he permitted a two-out single to B.J. Upton and nothing else.

Colon finally switched things up a bit in the fourth by allowing a harmless one-out single instead of a harmless two-out single, before striking out Dan Uggla and retiring Gattis. He then pulled off a 1-2-3 bottom of the fifth before returning to form in the sixth, permitting a two-out single to Johnson before retiring Justin Upton on a flyout to center. This also marked the fourth time in six innings that a mere single was greeted by a playing of the Tomahawk Chop. Putting aside for a moment the question of whether the Braves should do the Chop at all (*cough*no*cough*), it seems excessive for them to do it each time a Brave reaches first.

Gus Schlosser took over pitching duties in the top of the first, but Harang did not share his Mets kryptonite with the Braves submariner. d'Arnaud started off the inning by dunking a hit that fell untouched between B.J. and Justin Upton, allowing the catcher to leg out a hustle double. (That reminds me that Between The Uptons is my favorite early Stones albums.) Tejada followed by a dunking a bloop hit just beyond the infield to drive in d'Arnaud. Colon bunted Tejada over to second, and Young drove him in with a hit lofted to into right center against lefty Luis Avilan (though he was also thrown out trying to stretch his hit into a double). The scoring ceased there, though the Mets managed to knock Avilan out of the game when Avilan dodged a Daniel Murphy broken bat, hit the deck, and had to leave the game due to injury,

Colon had a wider lead to work with now, but saw no need to change his formula. Once again, he retired the first two men in the bottom of the seventh before allowing a single to Simmons. A new wrinkle was thrown into the mix when Tejada muffed a grounder from pinch hitter Ryan Doumit, thus making this the first time all night that the Braves had two runners on the bases at the same time. Colon paid the error no mind and induced a grounder from Heyward to end the frame.

In the top of the eighth, Lucas Duda hit a one-out single against new Braves pitcher Ian Thomas, followed by an infield hit by Lagares, whose single was awarded on review (making the Mets 2-for-2 in challenges this season). After Thomas was relieved by ex-Met Pedro Beato, the Baseball Robots rewarded the Mets for their faith in technology. With two outs, Tejada dunked another single into shallow right to drive in Duda, extending the Mets lead to 4-0. Beato got the last out of the inning, then returned to set the Mets down in order in the top of the ninth.

A four run lead in the eighth inning is a great thing, provided you have a bullpen that isn't the Mets'. Rowdy Kyle Farnsworth was given the eighth inning and—good news, everyone!—set down the Braves in order. Jose Valverde, on the other hand, preferred drama, and allowed singles to Justin Upton and Uggla to start the bottom of the ninth. A fileder's choice erased Upton, but when Valverde got a comebacker from Simmons, he fired a wide throw to second, pulling Murphy off the bag and turning a potential double play into zero outs.

But again: hitting baseballs is hard to do. Just ask pinch hitter Gerald Laird, who popped out to Murphy for out number two. Or ask Heyward, who flew out to deep center for the game's final out. Hank Aaron might tell you the same thing. Luckily for the Mets, he was safely in the stands, unable to hit even Jose Valverde's fattest offerings. 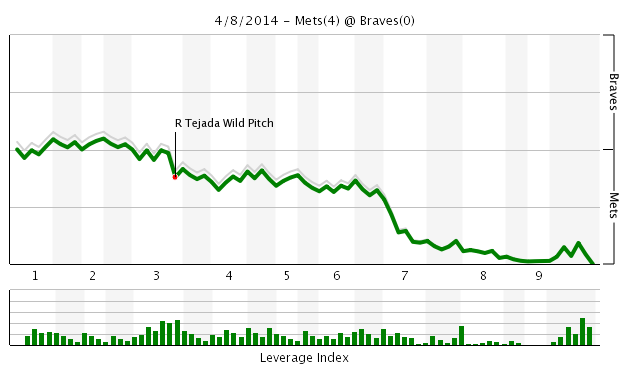