How does their stuff compare to years past in the early going?

Share All sharing options for: An early look at Mets relievers Kyle Farnsworth and Jose Valverde

With Bobby Parnell out for the rest of the season following Tommy John surgery, the Mets have turned to Kyle Farnsworth and Jose Valverde at the back end of their bullpen, at least for now. Farnsworth will turn 38 in a few days, and Valverde turned 36 in late March. Neither pitcher was great last year, with Farnsworth the better of the two but still not as good as he had been in the years before last.

Given their respective ages, it’s not surprising that both pitchers have seen a drop in velocity over the past several years. Since 2007, both pitchers were throwing hardest in 2009. Aside from Farnsworth’s bounce back in 2011, they’ve both seen at least a little decline in each season since. 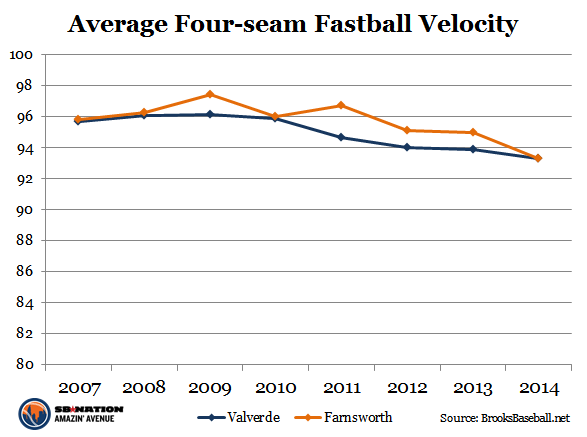 Looking ahead, these two pitchers’ fastballs might go in different directions. In each of the last couple of years, Farnsworth has thrown slower at the beginning of the season and gradually thrown a bit harder over the rest of it. Valverde, however, has generally thrown harder early in recent seasons before seeing a decline over the course of the year. So here’s how their very early fastballs look in comparison to Aprils past. 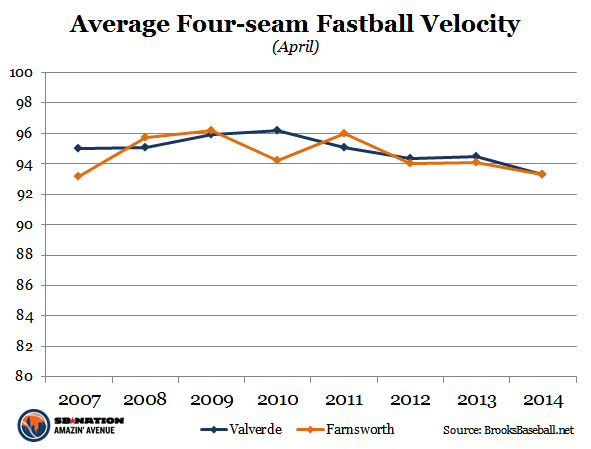 The same basic trend in each pitcher’s velocity exists here, too. It’s only April 9, but both pitchers have come out of the gate a slight notch below where they were last year. Neither pitcher is throwing slow, really—the average fastball for a relief pitcher this year is 92.1 miles per hour so far this season—but they might have a little bit less to work with in the way of stuff than they did a year ago. At just over 93 miles per hour, both pitchers will just be a little less likely to blow hitters away.