The Mets started the year poorly but turned things around quickly and finished April with a winning record.

With April—and the last day of March, for that matter—in the books, the Mets find themselves in second place in the National League East and atop the Wild Card standings with a 15-11 record. Considering they opened the year getting swept by the division rival Washington Nationals over three games, they are off to an impressive start. Over the course of the first month of the year, the team scored 106 runs and allowed 101.

After the Nationals swept them at home, the Mets rebounded to take two of three from the visiting Cincinnati Reds. They followed that up by going to Atlanta and taking two of three from the Braves before heading out to Anaheim for a couple of very late extra-inning games against the Angels, which they split before Bartolo Colon got rocked in the rubber game.

At 5-7 on the season, the team went to Arizona and swept the Diamondbacks, getting to and surpassing .500. A couple of losses to the Braves upon their return home put them one game on the wrong side of .500, but they won the series finale before taking three of four from the Cardinals and two of three from the Marlins.

Starting pitching was undoubtedly the team’s strength over the first month of the year. Mets starters had a 3.37 ERA, the tenth-best mark in baseball, and a 3.86 FIP that ranked a more pedestrian sixteenth. Individually, they were led by Jon Niese, who had a 2.20 ERA, with Bartolo Colon’s 4.50 ERA the worst of the bunch. As Tyler Kepner of the New York Times points out on Twitter, only one team in baseball had its starting pitcher go at least five innings in every game in the opening month: the Mets. 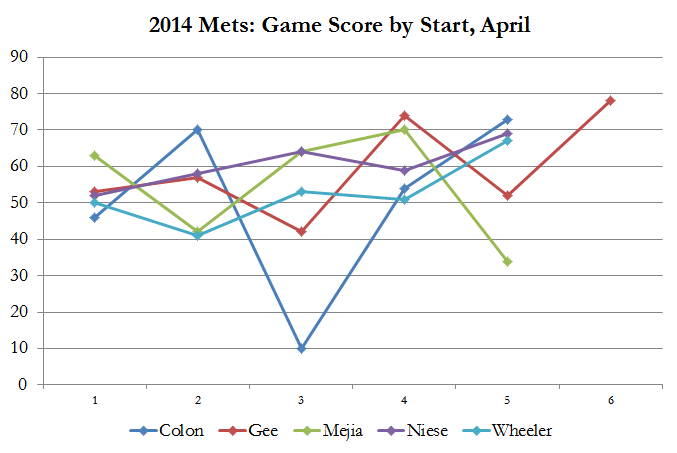 The bullpen’s 3.98 ERA ranked eighteenth in baseball, which might not sound like much but is a big improvement upon its performance in the early going over the past few years. The team’s relievers have been particularly effective over the past couple of weeks.

The Mets rank second-to-last in baseball with a 78 wRC+. They ranked 27th with a .220 batting average, 25th with a .300 on-base percentage, and dead last with a .319 slugging percentage. Curtis Granderson had one of the worst months of his big league career, and David Wright has not quite been himself thus far, either. With all of that, it’s impressive that the Mets have scored as many runs as they have.

Like last year, at least part of that gap between production at the plate and runs scored might be explained by good baserunning. Through the end of April, the Mets ranked tenth in Fangraphs’ baserunning runs above average metric.

The team’s best hitters in April were Lucas Duda (127 wRC+) and Juan Lagares (131 wRC+), the latter of whom hit the disabled list a couple weeks ago but is slated to rejoin the Mets tonight in Colorado.

A quick review of the players who joined or left the Mets—or did both—or spent time on the disabled list over the course of the season’s first month: