Mets should be optimistic about Zack Wheeler's 2014 performance

Zack Wheeler's 4.35 ERA this season is discouraging, but there's cause for optimism bubbling beneath the surface.

Share All sharing options for: Mets should be optimistic about Zack Wheeler's 2014 performance

The 2014 Mets season was supposed to mark the ascension of Matt Harvey and Zack Wheeler into the upper echelon of pitching tandems in the major leagues. Harvey’s elbow injury shattered this hope early on and shifted the expectations onto Wheeler’s shoulders. The season hasn’t gone exactly as planned for the 23-year-old right-hander—his 4.35 ERA and high walk rate are not encouraging— but there is nevertheless a lot to like in his early season performance.

What kind of season will Zack Wheeler have? Read a season preview and provide your own projection.

By game score, Wheeler had the second-best start of his big league career against the Marlins on Friday night.

Wheeler’s sub-par ERA and walk rate don’t look good on a stat sheet, but some of his other numbers, as well as the type of contact batters are making against him, leave plenty of room for Mets fans to be optimistic.

While Wheeler’s 4.35 ERA is indeed unspectacular, his 3.14 FIP and 3.52 xFIP suggest that he may be pitching better than the results would otherwise indicate. FIP is more predictive than descriptive, so while Wheeler could start pitching worse, if he continues pitching as he has so far this season we can reasonably expect his performance to improve.

For starters, his strikeout rate, now sitting at 22.9 percent, is nearly on par with his strikeout rate when he was pitching in the upper minors. It is also 3.4 percent higher than last season as hitters are making less contact against the young hard-thrower.

When hitters do make contact, they’re not doing nearly as well as they did in 2013. His line drive rate allowed this season is 18.3 percent, compared to 23.5 percent in 2013, this despite a gaudy .342 batting average on balls in play (BABIP). This number is significantly higher than his 2013 performance (.279) and the league average in 2014 (.294). The weak contact—that is, the relatively low line drive rate—against him suggests that his BABIP should drop as the sample size expands, assuming he maintains a similar line drive rate.

Less frequent and weaker contact are great signs for Wheeler, but there are other positive signs in his early season performance as well. He is inducing ground balls 52.3 percent of the time from opposing hitters and, conversely, he is giving up fewer fly balls, at 29.4 percent. Of these fly balls, only 6.3 percent are leaving the park, which ties him for 19th in the league, placing him in company with the Texas Rangers’ Yu Darvish, the Oakland Athletics’ Sonny Gray, and the Seattle Mariners’ Felix Hernandez. 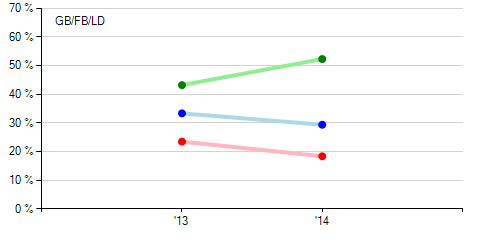 Zack Wheeler's ground ball rate has spiked this year while his line drive and fly ball rates have dropped. (via Fangraphs)

His ground ball rate, fly ball rate, and home-run-to-fly-ball ratio are all improved from last season and now rate comparably to some of the best pitchers in baseball.

His infield-hit percentage is another area where we could see improvement. Wheeler is allowing an infield hit on 8.8 percent of ground balls, which is among the higher marks for ground ball pitchers this season. Well-placed grounders, defenders with poor range, and other vagaries of pitching can conspire to raise one’s infield-hit rate, and while the Mets’ infield defense doesn’t figure to get better—it will probably get worse if Wilmer Flores is playing more often—squibs and slow-rollers tend to even out in the pitcher’s favor given enough opportunities.

On their own, none of these statistics signal an impending surge in Wheeler’s performance, but together they hint at plenty of natural room for his numbers to improve. While his walk rate, currently at 10.6 percent overall and 12.3 percent against lefties, is still worrisome, he should be able to better attenuate the effects of those extra runners he puts on base since he’s getting more ground balls and allowing fewer home runs.