Mets vs. Yankees Recap: Webster's dictionary defines "slog" as the state of condition of being tor(cont.)

It wasn't pretty, or mildly attractive, or even presentable, but it was a Mets win at Yankee Stadium that completed a two-game mini-sweep in the Bronx. So, yay?

Share All sharing options for: Mets vs. Yankees Recap: Webster's dictionary defines "slog" as the state of condition of being tor(cont.)

Gary Cohen repeatedly referred to Monday's 9-7 Mets win as a "barn burner." Tuesday's Subway Series matchup didn't deserve that moniker, but it was the kind of game that made you feel like setting fire to something. Watching it from start to finish proved a torturous, infuriating experience that felt like it took years off my life. Just imagine if the Mets lost it. 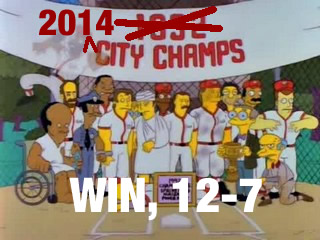 Eric Young started off the proceedings by getting nicked in the foot by a pitch from Yankees starter Vidal Nuno. Daniel Murphy followed that up with a 10-pitch walk, and David Wright singled up the middle to drive in the Mets' first run for the second game in a row.

The Mets have had little trouble scoring a run in the first inning lately. They have had trouble scoring more than one run in the first inning, however, and many of their recent losses have stemmed from their inability to capitalize on a pitcher's early struggles. They couldn't be accused of the same crime tonight, as Curtis Granderson turned on a fat offering from Nuno and deposited it into his favorite spot in Yankee Stadium's right field bleachers for a three-run homer.

That gave Zack Wheeler a sizeable margin of error to work with, but the Mets' young righty showed no inclination to keep it. He looked decidedly unnerved all night, and seemed to find himself in a three-ball count to every batter he faced. In the first, he allowed a two-out RBI single to the ailing Mark Teixeira. Then, Brian McCann took Wheeler deep—or what passes for deep at Yankee Stadium—to cut the Mets' lead to one run. The short porch giveth, and the short porch taketh away.

Nuno gained some composure for a few nanoseconds, setting down the Mets in order on six pitches in the top of the second. But in the third, Wright reached him for a leadoff double into the left field corner, eventually coming around to score on a Juan Lagares sac fly to stretch the Mets' lead to 5-3.

In the fourth inning, the Mets did what they could to Wheeler-proof their lead. Ruben Tejada got things going with a leadoff walk. Eric Young followed by hitting a smash to third base. Solarte made a nice stop to grab the ball and keep it from going into the outfield, but only temporarily, as his throw to second sailed into shallow center, putting runners on second and third. A long sac fly by Murphy scored Tejada, moved Young to third, and brought a merciful end to Nuno's night on the mound. Wright singled against the first man out of the Yankees bullpen, Alfredo Aceves, to score Young, re-gifting the Mets the four-run lead they enjoyed in the first.

Wheeler's outing was no less rocky, yet somehow his evening was more charmed than Nuno's. He put up a zero in the second despite putting runners on the corners with one out. In the third, he issued a two-out walk to McCann and engaged Alfonso Soriano in an endless at bat before getting him to ground out.

After his teammates re-gifted Wheeler a four-run lead in the top of the fourth, the pitcher proceeded to walk the first two batters in the bottom half. Brett Gardner knocked in a run with a single, and a big inning looked to be in the offing, especially with Derek Jeter and his ∞ lifetime batting average against the Mets up next. Sometimes it's better to be lucky than good, however, and Wheeler was lucky enough to see Jeter bounce into an inning-ending double play.

In such a game, it behooves a team to score as often as possible, and the Mets behooved well in the fifth inning. First,  Juan Lagares turned a bloop hit into a hustle double, then scored on a two-out single by Tejada. After a walk to Eric Young, Murphy hit a towering shot down the right field line that bounced off the right field foul pole for a three-run homer.

The Mets would not score in the sixth, seventh, or eighth innings, but surely 11 runs would be enough to prevail, even in this ballpark, even in this game, right? Right?! The answer was yes, of course, but that didn't mean the Mets would make things easy. Or watchable.

With a seven-run advantage in his pocket, Terry Collins saw no harm in giving Wheeler a chance to pitch the fifth and qualify for a win. No one other than Collins had the slightest interest in Wheeler earning a W, least of all Wheeler himself. The Yankees were happy to see him get a shot, though, as they were given a walk and single by the charitable Mr. Wheeler before Alfonso Soriano reached him for a one-out RBI single. Collins finally pulled the plug on Wheeler, having once again done admirable field research for The Day Late And A Dollar Short Foundation.

Daisuke Matsuzaka restored order by retiring the next two batters with little trouble, then—glorioski!—set down the Yankees in order in the sixth as well. A leadoff walk in the seventh ultimately proved harmless. Matsuzaka opened the door just a little too wide when he gave up a solo shot to Solarte and a walk to start the bottom of the eighth, but a double play and fly out limited the damage.

Between the fifth and sixth innings, Joe Girardi argued balls and strikes with home plate ump Jerry Layne and was tossed, presumably so he wouldn't have to watch this game any more. The SNY crew had no such option, and so descended into the silly territory they often mine during blowouts. Those who stuck around for the whole shootin' match learned:

As for the actual game, the Mets plated a seemingly superfluous run in the top of the ninth. Jeurys Familia took the mound for the ninth and promptly walked the first two batters he faced, because why wouldn't he? A one-out single from McCann drove in a run and put the Yankees in a position to, if not tie the game, then at least prolong everyone's torture. Familia recovered to set down the next two batters before the Mets and Yankees could be charged with vilating the Geneva Convention.

So, in summary: The Mets completed a two-game mini-sweep of the Yankees in the Bronx and won their sixth consecutive game against their crosstown rivals. Now let us never speak of it again. 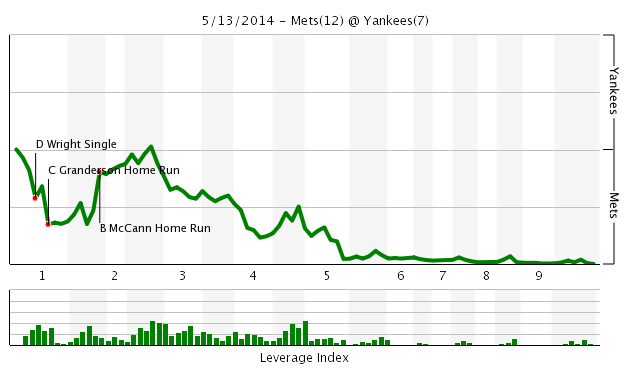