We'll celebrate Memorial Day with the Mets and check out some of the flashiest throwbacks from around the league.

Share All sharing options for: Mets Uniform Review: Busting out the camouflage

This week was a busy one when it comes to wild and wacky uniforms. Not only did we have the Memorial Day camouflage craze on Monday, but there were also some terrific throwback uniforms featured by teams from outside the Mets' division. Let's dig into New York's holiday look and then check out the awesome retro unis. 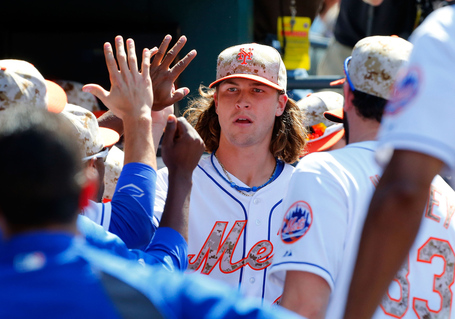 Instead of the heavily camouflaged jerseys that they wore on the first "Military Monday" of the season, the Mets came out on Memorial Day in these duds, which are a lot like the ones they used to celebrate last year's holiday. Since only the script is in the camo design, these jerseys are a lot more palatable than the Padres-style stuff the Mets wore in April. The hats are like the home alternates, but with camo instead of blue.

I know some people really don't like the camouflage look, but I don't mind it so much when the caps match the jerseys. It's certainly better than a few years ago when teams had to wear red, white, and blue caps that clashed badly with the rest of their uniforms. 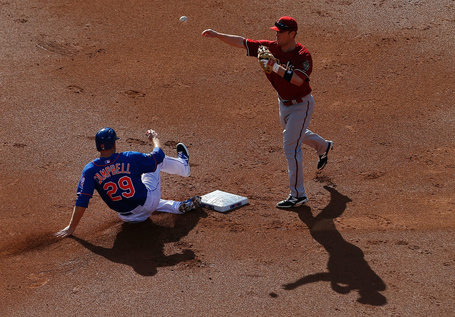 You know what's even cooler than a red vs. blue game between the Mets and Nationals? A crimson vs. blue game between the Mets and Diamondbacks! The darker shade of red worn by Arizona sets them apart from other red teams like the Reds and Cardinals and gives the Snake's uniforms an earthier feel. If I was in charge, I never would have gone away from the teal and purple that this franchise broke in with, but at least the red of red used by Arizona isn't completely conforming.

The Mets' orange-brimmed caps go with their blue jerseys really well, and the club is good about taking advantage of this. One thing they could use are some orange-brimmed batting helmets to go with the caps, but it's hard to see them going in that direction considering that the team is always looking to save money. At least the Mets don't wear helmets that are a completely different color than their hats like the Indians are wont to do. 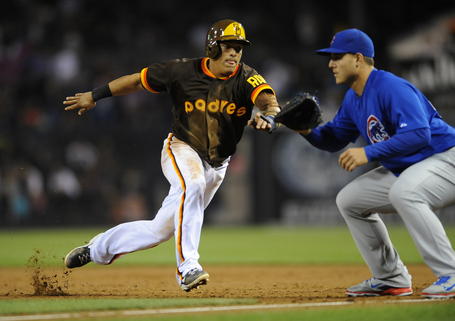 Wow! Would you look at that! Anytime the Padres wear brown, it is a sight to behold, and this week was not an exception. We're not talking about the camo brown that the Padres wear every Sunday -- even though I'm okay with those because they are less bland than San Diego's normal unis and at least they went all the way and got matching helmets -- We're talking about brown brown! The kind from the past.

This week San Diego celebrated the 30th anniversary of its 1984 NL championship team by wearing replica jerseys from that season. On Thursday, the Padres wore white throwbacks (boo!), but on Friday and Saturday, they broke out these beauties. As if the brown-yellow-orange combo wasn't enough, the uniforms also come with matching helmets and the "RAK" sleeve patch that was added to the 1984 jerseys when former Padres owner Ray Kroc passed away that year.

San Diego chose to sport the throwbacks against the Cubs because that is the franchise that the Padres beat in the NLCS in 1984. While Chicago didn't have throwbacks of its own, the team did wear bight blue jerseys to create a fun color vs. color matchup that looked great on the field. 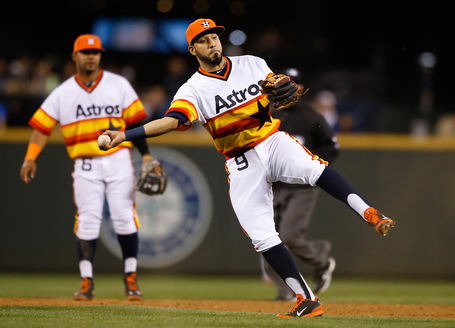 Of course, the Padres aren't the only team that used to look better than it does now. It was cool to see the Astros return to wearing orange and navy two seasons ago, but we're still waiting for the day when their old rainbow stripes become more of a regularity. These legendary uniforms came out of the closet for Turn Back the Clock Night in Seattle, and they looked so good that Houston stole the show from their hosts.

Just look at the bold jersey font! The stirrups! The pants numbers! This is a great look that only looses points because it breaks the old baseball fashion rule "don't wear white on the road," but with colors that bright, no one had trouble telling the home and away sides apart.

I was also interested to see Houston with orange batting helmets, because they have previously mismatched their standard navy helmets with orange hats. Maybe they were doing that on purpose? 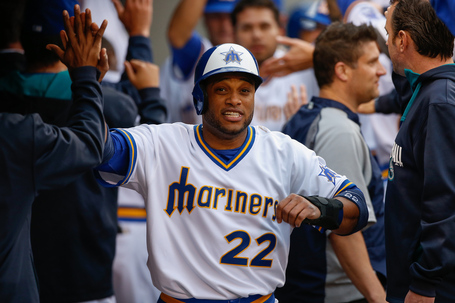 No, the Astro were not the only team playing in Seattle on Saturday night, although you can forgive me for getting carried away, right? The Mariners were also wearing uniforms straight out of 1979, but these ones I don't favor as highly. Maybe it's just because they don't remind me as much of the 1986 NLCS, but this look is bland except for the awesome trident "M" that is featured prominently.

I like the navy and teal that the current Mariners wear a lot better than this blue and gold that looks too much like the throwbacks the Brewers roll out on a regular basis. The "MB" glove is just a little cooler than the trident "M," and I like that the 2014 Mariners can sport a teal jersey to give them a totally unique look. Still, there's nothing wrong with the 1979 M's unis; they just don't stand out as much as other throwbacks. 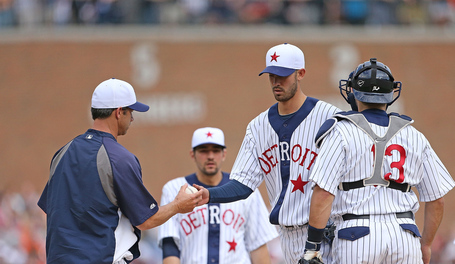 Hey, is that the SB Nation softball team? No, it's actually the Detroit Tigers dressed as the Detroit Stars during a Negro League uniform game against Texas. This look is a great change from Detroit's normal navy-and-white approach. The stripe over the buttons of the jersey is something that really could become fashionable, and those navy pockets flaps on the players' fannies? Awesome! Even if the hats look more like SB Nation swag than MLB apparel, this is still a sweet look for Detroit.