One of my favorite things about a pitching prospect reaching majors is that we finally get data on his pitches. In particular, we finally get data from the PITCHf/x cameras installed at every ballpark in the majors—there are cameras installed in more than a few minor league parks, but that data isn't public. How exactly do each of the pitches move? Where does he locate them? Does he have issues repeating a certain pitch?

What Does Montero Throw?

Figure 1 and 2: Movement and Velocity of Montero's pitches.

Vertical Break: the amount of inches the ball drops/"rises" as compared to how we would expect gravity to make a pitch drop. So a Fastball with Positive 10 Vertical Movement "RISES" 10 inches more than it should if gravity was the only force acting on it and a curveball with -10 Vertical Movement drops 10 inches more than a pitch thrown that is just acted on by gravity.

Montero throws four pitches: a four-seam fastball, a two-seam fastball (or "sinker"), a changeup, and a slider. You'll note the pitch totals here don't match Brooks Baseball exactly, because the gap between Montero's two fastballs, and the two-seamer and the changeup aren't always completely clear. In two of his starts, there was a clear difference between his fastballs, but in his second start, the two seemed to merge. Regardless of the exact numbers, the pitch mix isn't a particularly unusual one.

Montero's main pitch is the four-seamer, which has decent velocity but unspectacular movement. It should be noted that the pitch's movement varies a bunch at times; a few times it seems to have a little cut. But really it doesn't have a lot of "rise," and it doesn't have any tail or cut on average. By movement alone, it's a pretty mediocre pitch, which a pitcher can get away with in combination with location (more on this below) and other pitches.

Montero then has a two-seamer, which has a bit more impressive movement. The pitch has fairly good sink, even if it doesn't have a lot of tail. It could easily be a strong ground ball pitch. His first off-speed pitch is his changeup, which has similar movement to the two-seamer but is on average about five-to-six miles per hour slower. That said, a few of these changeups, particularly in his first start, had some pretty different movement (a lot more sink), so this pitch could still be a work in progress.

Finally there's Montero's slider. Easily the pitch considered his worst in the minors, Montero's slider's movement is a bit all over the place. There's a lot of variance on the pitch. The pitch's velocity is fairly stable—around 81 to 83 miles per hour—but as you can see on the graph above and even in individual starts, the pitch's vertical break is all over the place. Sometimes the pitch has a good amount of drop (a slurvy slider), other times, it has basically none. This is clearly a work in progress.

When does Montero throw each pitch?

Where does Montero locate each pitch?

This is where things get interesting. If you recall, the scouting report on Montero was that he was a control pitcher, who would not walk batters but would get them out on the corners. And for his four-seam fastball locations, it certainly seems like that's what he's trying to do. 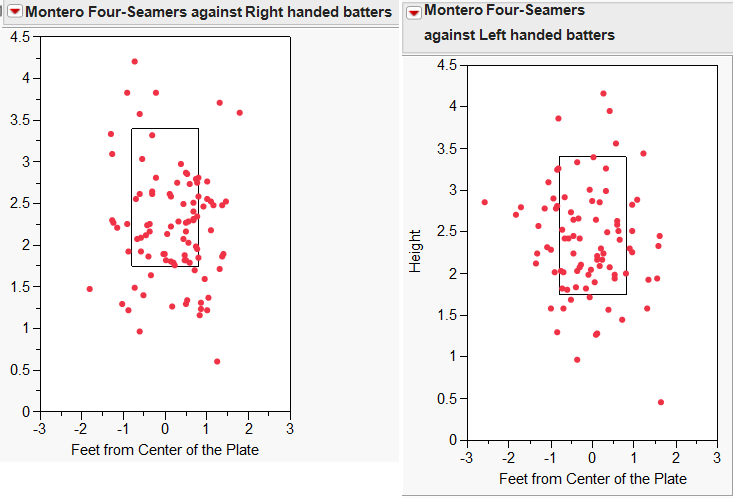 It's more obvious against right-handed batters to be sure, but Montero clearly does seem to be trying to hit only the corners of each side of the plate. This becomes even more apparent in two-strike counts (for the obvious reason), but he hasn't exactly been a perfect control pitcher so far. Particularly against lefties, a bunch of these fastballs have been in the middle of the plate, a danger zone for a guy with his movement.

By contrast, Montero's locating of his other pitches, including his two-seam fastball, is completely different: 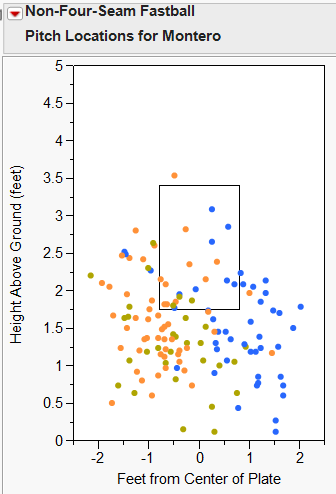 I feel the need to point out again: The orange pitches are a type of fastball—his two-seamer. Despite this, like his changeup and slider, he rarely throws this pitch over the plate. In fact, only 15 percent of these pitches are in the strike zone. This is pretty ridiculous.

Mind you, it's pretty normal for a changeup or slider to be used only on the corner or as a ball. That's what these pitches do. It's not normal for a two-seamer to be used as such, but Montero is using the pitch like an off-speed pitch or breaking ball. So far that's worked okay, believe it or not. Only about 50 percent of his sinkers have been taken for balls, despite 80 percent being out of the zone. And naturally, none have been hit hard (4 ground balls, a bunch of whiffs).

Still, If Montero really is going to be a control pitcher who doesn't walk anyone, he's probably got to be able to throw one of these three pitches for a strike now and then. And he shows no signs of actually wanting to. I'm not sure this is a sustainable strategy.

You'll notice I didn't really talk results much here. We have three starts, and we can't really break down pitch results so early yet. But you can get a picture of what type of pitcher Montero has been so far: a pitcher with one type of pitch he throws for strikes and everything else out of the zone. This doesn't fit with his profile coming up, so I hope he changes soon, because not everyone will be as free-swinging as the Diamondbacks. And Montero's stuff simply isn't impressive enough in its movement or velocity to survive without better control than he's shown.