With the 10th pick in the 2014 MLB Draft, the Mets can potentially draft Max Pentecost. Who is Pentecost and would he be worth selecting? 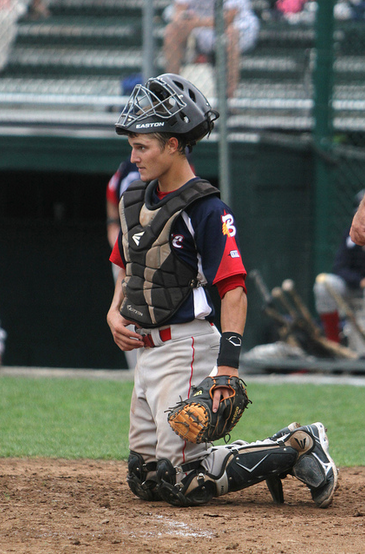 A graduate of Winder-Barrow High School in Winder, Georgia, Max Pentecost was drafted out of high school by the Texas Rangers, with their seventh-round (234rd overall) draft pick in the 2011 MLB Draft. Counting the Rangers as one of his favorite MLB teams, Max made the difficult decision to reject their offer and continue his education and baseball career at Kennesaw State University, where he had previously committed to attend.

A significant reason he declined their offer was that he had been playing with an injury in his right elbow that would eventually need surgery to correct. During his sophomore and junior years of high school, he had been playing with what was possibly a hairline fracture in his right elbow. It bothered him, but it was more of an annoyance than anything else, until he felt something pop while warming up in April 2011, and opted to undergo olecranon fracture surgery. Thought to possibly be a third-round talent, Pentecost dropped to the seventh because of the injury and subsequent surgery. Being a seventh-round selection is certainly nothing to sneeze at, but Pentecost reasoned that once his injury issues were corrected and his elbow fully healed, he would flourish on the field, and would be drafted in a lower round.

The gambit worked, as Pentecost is now considered a first-round draft pick, the best pure catcher available in the 2014 draft. For the better part of three years now, Pentecost has been the starting catcher for the Kennesaw State Owls. After a solid 2012 season in which he hit .277/.364/.393, Pentecost has really turned his game up a notch. After correcting his batting stance slightly to allow his bottom half to stay in better sync with his arms and torso, Pentecost hit .302/.374/.410 in 2013, and really impressed during his stint in the Cape Cod League, where he hit .346/.424/.538 in 35 games and earned Cape Cod League MVP honors. In addition, he was named Perfect Game College Summer Player of the Year.

Already on scouts' radars, his performance in the Cape Cod League really opened eyes, and the torrid pace that he continued on during the 2014 baseball season—.422/.477/.626—made Pentecost a bona fide first-round draft pick.

At 6'1", 190 pounds, scouts have reservations about how Pentecost's body will hold up to the rigors of catching one-hundred-plus games, and most agree that adding a little muscle will help him in this regard. His swing is smooth and fast, designed more for making line drive contact than for driving the ball with power. As such, most see him as possessing below-average power, with the potential for that to improve if he can develop additional strength. Kennesaw Owls hitting coach Derek Simmons calls Pentecost the best breaking ball hitter he's seen as a coach, and praises his ability to recognize pitches as they are delivered from the mound. While his eye helps at the plate, it helps behind the plate as well.

As a receiver, Pentecost does not grade poorly, but his bat is his calling card. He possesses average arm strength, and his pop time is consistently MLB average or even slightly better, but he has inconsistent throwing mechanics that hurt his accuracy. His defensive ability has improved since he was drafted by the Rangers out of high school in 2011, leaving no doubt that he will stick behind the plate in the future. In addition, Pentecost calls pitches for his pitching staff, something normally handled by coaches.

Surprisingly, Pentecost is an above-average runner. He understands when and how to steal bases and moves well on the basepaths.

Pentecost blends decent athleticism with a well-rounded skill set to make him the best catching prospect—at least among those with a good chance to stay behind the plate—in this year's class. Having a great name doesn't hurt either. Defensively, he does need some polishing. His footwork can get sloppy, and his arm accuracy can suffer as a result. That said, the arm strength is fine, his pop times are consistently in the 1.9-second range, and I like his energy and agility behind the plate. He's good at blocking, also. And the aforementioned athleticism, rare in a catcher, could indicate that he can improve his footwork.

But while he's an unspectacular defender, he really looks great at the plate, thanks to outstanding balance, above-average bat speed, and a very smooth stroke. He does a great job driving the barrel of his bat through the zone, and he sprays line drives all over the field. While his swing isn't really geared toward power production—it's pretty flat—he does have enough strength to hit the occasional home run. There really isn't a great comp out there for Pentecost, but I suppose he could be similar to Sal Perez (.280-.300 with 15 homers and 25 doubles) with somewhat less defensive value.

"Pentecost won't be flashy but has solid tools across the board and should be a solid MLB backstop with offensive potential."
—Matt Garioch, MinorLeagueBall.com

"Pentecost was one of the most impressive all-around catchers to play on the Cape since Buster Posey. He consistently posted sub-1.90 pop times and showed athletic actions behind the plate. He's currently an above-average runner, and none of these attributes are even his best trait. The best is his bat. He's compact to the baseball and squares up off speed pitches as consistently as any player I've seen/ He blossomed despite facing some elite pitching."
—Frankie Pilliere, Perfect Game USA