One day after canning their hitting coach, the Mets continued to struggle to string together rallies. Luckily for them, gloves don't slump.

Share All sharing options for: Mets vs. Pirates Recap: Amazins slay the Hudgens, flash the leather

It's obvious that the Mets have bigger problems than Dave Hudgens, their hitting coach who got his pink slip on Memorial Day. For instance, an ownership that blames a hitting coach and its front office for an anemic lineup that is clearly the product of penny pinching imposed by said ownership. But when a hitting coach is fired, it's usually less an indictment of the coach himself than a signal to the hitters that they should step up their game, assuming they are capable of doing so.

The Mets didn't exactly knock the cover off the ball in the first game of the post-Hudgens era. But they did flash some leather, which can atone for a multitude of sins. 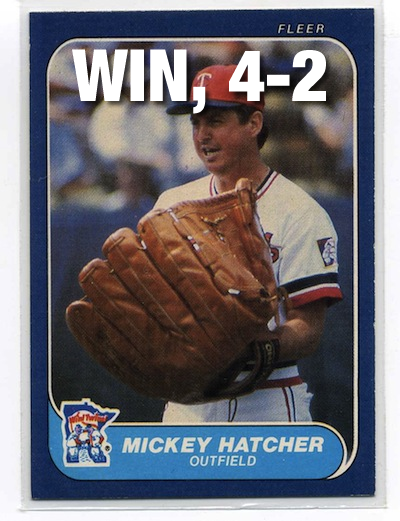 One thing the Mets were assured of tonight: No matter what they did on the field, none of them could possibly look as bad as 50 Cent. On hand to promote his upcoming concert at Citi Field, the artist formerly known as Curtis Jackson was invited to throw out the ceremonial first pitch. His quote-unquote throw was one that should be impossible for a healthy adult arm to make. 50 Cent's lob not only embarrassed himself, but the entire borough of Queens, if not all of greater New York City.

As for the people paid to throw balls, Jon Niese had an uneven outing and seemed to struggle in the unseasonable mugginess. But for most of the evening, the defense was able to come to his rescue. Niese pitched a 1-2-3 top of the first, with some help from Juan Lagares, who snared a long fly off the bat of Andrew McCutchen a few inches from the fence in right-center. In the second, Niese issued a leadoff walk, but got Russell Martin to line out to left on a hit-and-run play, which allowed Curtis Granderson to double off Gaby Sanchez at first. The third proceeded more smoothly, as Niese recorded a pair of strikeouts.

Edinson Volquez and the Pirates gave the Mets a few opportunities in the first two frames—a two-base outfield error in the first, a pair of walks in the second—but the home team could not capitalize in either case. Then in the third—after McCutchen paid back Lagares by making his own great catch on a ball hit to right-center—Daniel Murphy hit a dribbler down the left field line that went for a one-out double, thanks to an infield shift. A long fly by David Wright moved him to third, and after Grandy walked, Bobby Abreu snuck a single through the shift to drive in the Mets' first run.

With a slim lead under his belt in the top of the fourth, Niese saw Jose Tabata reach first on what was judged an error. One out later, Gaby Sanchez collected the Pirates' first hit to put runners on the corners, because that's the kind of thing Gaby Sanchez does to the Mets, but Niese induced a foul out from Russel Martin to escape danger. In the fifth, Niese negotiated around a two-out single in the top of the fifth, with some more help from his defense, as a fine running catch by Abreu and a great stop by Tejada at short turned potential hits into outs.

In the bottom of the fourth, the Mets struck again, and did so by hitting—gasp!—extra base hits. Freed from the tyranny of Dave "Thou Shalt Not Swing" Hudgens, Ruben Tejada took a whack at the first pitch he saw and belted it over Josh Harrison's head in right field for a one-out double. After Niese struck out, Lagares smacked his own double to the same spot to plate the Mets' second run.

The Mets failed to score in the fifth, although a lengthy at bat by Lucas Duda resulted in a walk and pushed Volquez's pitch count past 100. But the PIrates managed to do the same in the top of the sixth, as Niese landed himself in some trouble by issuing a leadoff walk to Harrison and a one-out free pass to McCutchen. Amazingly, he retired Sanchez, Met Killer extraordinaire, on a fly to the outfield. Less amazingly, he then walked Martin to load the bases, followed by a game-tying two-run single by Marte.

That ended Niese's night and brought on the season debut of the recently recalled Vic Black, who continued the trend by walking Neil Walker on four pitches, reloading the bases. Black recovered to fan pinch hitter Ike Davis. As a Mets fan, it is strange to find oneself anticipating a strikeout by Davis and not feel bad about it.

The BBs just kept on coming in the bottom half, as Tejada walked to start the frame against new Pittsburgh pitcher Jeanmar Gomez. Tejada advanced to second and third on a pair of wild pitches, then scored on a Lagares single. On the very next pitch, Murphy knocked a double down the right field line that drove in Lagares all the way from first, expanding the Mets' lead to 4-2.

Gomez took his exit and gave way to Justin Wilson. No, not this guy, but a lefty asked to face David Wright for reasons known only Clint Hurdle. The Pirates manager looked like a genius when Wilson retired Wright and Granderson without further incident, then stayed on in the seventh to set down the Mets in order.

Black remained on the mound in the top of the seventh and so did his control problems, as he issued a two-out walk to Tabata. McCutchen then belted a single to right to put runners on the corners, thus summoning the feared Sanchez to the plate with yet another chance to do damage. Black managed to catch Sanchez looking on a sweet curveball to end the threat.

Jenrry Mejia entered the game in the eighth with en eye toward collecting a six-out save, which is definitely something you should ask a guy who has barely ever closed to do. The righty did not appear up to the task when he too got walk happy, putting Marte on base with one out. Walker then singled between first and second to put runners on first and third. The Pirates sent Pedro Alvarez to pinch hit, and Mejia worked the count full to him before inducing a bouncer up the middle that went for an inning-ending GIDP.

Tejada hit a leadoff single and stole second in the bottom of the eighth. His teammates could not use him as an insurance run, however, as the Pirates once-and-future closer Jason Grilli struck out the next three batters. The Mets' failure to knock in Tejada loomed large in the ninth when the first batter Mejia faced, pinch hitter Travis Snider, hit a ball between first and second that Eric Campbell (now playing first) charged aggressively. Had he let it go, Murphy probably would have fielded it and thrown out Snider. But he didn't, and the ball bounced off Campbell's glove for an infield hit. That baserunner all but ensured McCutchen would get a chance to bat as the tying run, which is something you don't want, I'm told.

Mejia continued to give up hard hit balls throughout the inning, but completing the night's theme, all of them found gloves. Josh Harrison belted a liner that Chris Young (inserted in left field) played awkwardly but ultimately caught. Then, Tabata hit a ball into the right field corner that Granderson ran down to make a snow-cone catch.

With McCutchen up, Mejia seemed terrified to throw a strike and walked him, the eighth free pass of the night for Mets pitchers. The BB put the tying run on base and brought (oh dear god) Gaby Sanchez to the plate as the go-ahead run. Mejia got ahead of him, then saw Sanchez hit a ball toward the shortstop hole It looked ticketed for the outfield, but Tejada made a fine running play to catch up with it, snared the ball, and fired to third for a force out.

All told, it was not a crisply played game, but the glovework made up for the Mets' deficiencies in other areas. No doubt the Wilpons are hard at work devising ways they can fire their pitching coach every day. 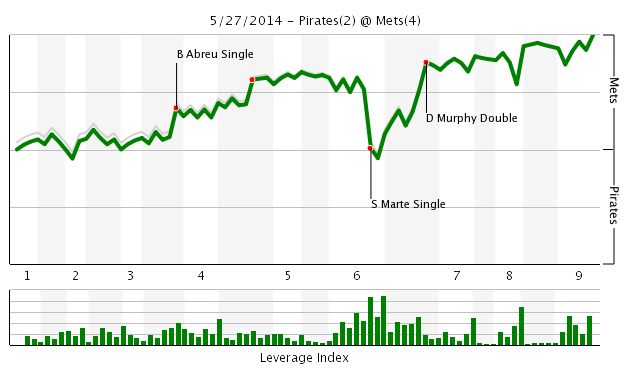